Omkareshwar Temple is located in the center of the Madikeri Hill station in Coorg. This temple is dedicated to Lord Shiva. Depicting both Islamic and Gothic architecture, Omkareshwara Temple was built in 1820 by Lingarajendra as a dedication to Lord Shiva. It is one of the most famous tourist places in the region. Legend has it that the Omkareshwar Temple Madikeri was built by the king as a form of penance.

This Omkareshwar Temple Madikeri can be seen under the influence of Muslim architecture because in that period Hyder Ali and Tipu Sultan rule out in this area. This temple was called Omkareshwar because some people believe that the king of this temple was brought from Kashi by the king. This temple is different from other temples in the Coorg. The temple is so beautiful that you don’t feel like leaving the place.

According to mythology, a Brahmin was killed by the king to achieve his political desires. After this, the king was having nightmares for his harsh act. He sought advice from some of the wise people to free himself from the nightmares. They advised the king to construct a shrine of Lord Shiva to get back his peace of mind.

The king agreed with their suggestion and brought a Shivalinga from the holy place of Kashi. Built a new temple and installed the Shivalinga. After the Shivalinga was installed the king got no nightmares. This Shivalinga is revered as Omkareshwara. The architecture of the Omkareshwar Temple Madikeri is a unique style. The design of the temple is very similar to a Muslim Dargah. The construction of the temple includes a big central dome with four turrets erected at the four corners.

There are no pillars in the hall of the Omkareshwar Temple Madikeri, which is very common in a lot of the temples. The Shivalinga is placed near the door of the entrance. On the frame of the entrance door, there is a copper plate on which the history of the temple has been inscribed and fitted.

The structure of the Omkareshwar temple Madikeri is quite large and simple. Also, the ambiance of the temple is peaceful. Inside the temple premises, there is a water tank consisting of a Mantapa built in the center. There is a walkaway connecting the Mantapa. ‘Several fishes are in the tank which attracts the tourists visiting the temple. 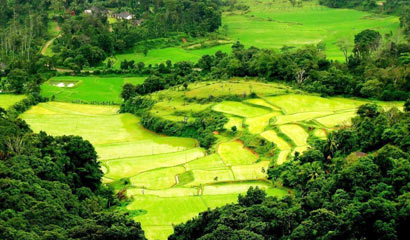