Maharashtra is blessed with 5 Jyotirlingas out of which 3 are amongst the 12 Jyotirlingas of Lord Shiva, 2 Shakti Peethas, 1 Panj Takht, gigantic mosques and beautiful churches. The state plays a vital role in hosting the grand Kumbh Mela at Nashik. It is a sacred land with the holy abodes of nearly of all the gods. People belonging to different religions come here to pray and seek blessings of the almighty. Ideologies of many religious saints and sages who have blessed the state with their divine presence leave a long lasting impression on the mind of the devotees. You too can bask in the bliss with Maharashtra Jyotirlinga Tour with Shirdi. Take a tour of the holy shrines in Maharashtra to seek the blessings and witness how they carry forward the rich legacy of prayer and other religious activities.

The 4 Nights / 5 Days tour package stands out amongst the rest of the Tour Packages for Jyotirlinga in Maharashtra.  The holy sojourn begins from Mumbai where you will be exploring popular sites like Shree Siddhivinayak Temple, Gateway of India, Marine Drive, Colaba Market, and the Prince of Wales Museum. Your next destination will be the Bhimashankar Temple. Besides, having fun at the Bhimashankar Wildlife Sanctuary is a major highlight of the tour. The detailed itinerary also allows you to visit Shirdi and its famous temples such as Samadhi Mandir, Khandoba Temple, Shri Sai Baba Temple and Shani Shingnapur. Make your way to Aurangabad to offer worship at the Grishneshwar temple. The tour also covers Nashik so that you can offer prayers at the Trimbakeshwar Temple. Numerous pilgrimage destinations related to different cultures are knitted together in Maharashtra in a perfect manner that makes it one of the must-visit destination at least once in a lifetime. 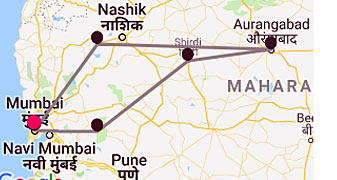 After landing at the International Airport / Railway Station in Mumbai, our tour agent will greet and escort you to the hotel. Complete your check-in formalities and relax for a while. The rest of the day is reserved for an excursion to the major attractions of Mumbai. Start from Shree Siddhivinayak Temple which is one of the richest temples in India with the inner roof of its sanctum being plated with gold. This venerated shrine is dedicated to the Lord Shri Ganesh. It is often frequented by renowned Bollywood celebrities and politicians. Next, move to the Gateway of India, also called the 'Taj Mahal of Mumbai'. This monument was erected to commemorate the landing of King George V and Queen Mary on their visit to India at Apollo Bunder. Also, it is the first structure that welcomes visitors entering the city by the sea.

Thereafter, visit the Marine Drive, also famed as the 'Queen's Necklace', the place caters to the need of all kind of travelers. The 3.6-km long boulevard consists of a C-shaped six-lane concrete road along the coast. A promenade runs parallel to the road. You can enjoy the spectacular views of the beach when it lights up at night. From there, you will be taken to Colaba Market, a bustling area which is packed with retro-bars, street stalls, markets and many more. This place is popular for crystals, jewelry, handicrafts, brass items, clothing, books, and incense. This is the one place which always seems like a carnival all year round.

In the evening, you will go to the Prince of Wales Museum, also known as the Chhatrapati Shivaji Maharaj Vastu Sangrahalaya. It was built to commemorate the visit of Prince of Wales and Edward VIII in the 20th-century. This museum has a garden full of flowers and palm trees and displays more than 50,000 exhibits of ancient India.

Later, come back to the hotel for an overnight stay.

After breakfast in the morning, you will drive towards Bhimashankar which is located 223 km away from Mumbai. The Bhimashankar Temple one of the twelve 'Jyotirlingam' shrines of Lord Shiva in India and is situated at height of 3250 feet. This place is surrounded by hills and covered with thick green rainforests. Upon arrival on Bhimashankar, check-in at the hotel. After that, visit the Bhimashankar Temple, one of the attractive and well-known religious places in Maharashtra as well as in India. There is a legend behind the name Bhimashankar. It is also the source of the River Bhima which merges with Krishna River near Raichur. Built in the Nagara style of architecture, this temple is a modest yet graceful shrine. This place shows the excellent skills of the Vishwakarma sculptors of the bygone era. Shivaji, the great Maratha ruler made endowments to this temple to facilitate worship services.

In the evening, explore Bhimashankar Wildlife Sanctuary which is rich in floral and faunal diversity. This sanctuary is a paradise with sparkling waterfalls, lush hills, and dense forests. It is a part of the Western Ghats where you will see a variety of animals, birds, plants, and insects. Malabar Giant Squirrel, a rare animal locally called as 'Shekaru', can also be found in deep dark woods of the sanctuary. It is also considered one of the best biodiversity hotspots in the world.

Have scrumptious breakfast early in the morning and move towards your next destination, Shirdi which is around 183 km away from Bhimashankar. This place is known as the former home of revered spiritual leader Sai Baba. He was an Indian spiritual master who is revered by his devotees as a saint, a fakir, a Satguru, and an avatar of Lord Shiva and Dattatreya. This city is also called as Sai Nagar and tourists come here especially to take the blessings of Sai Baba.

After reaching Shirdi, get ready to visit the Samadhi Mandir. The body of the famous holy saint Sai Baba rests in peace in this temple. This place also has the collection of all the articles which was used by the holy saint and they are displayed in a special showroom. It is made up of white marble stones and the railing surrounding it is decorated with ornaments. A palki with Sai Baba's photo is taken out from the temple on every Thursday as well as on special occasions. Next, visit the Khandoba Temple. This temple has icons of Khandoba, Mhalsai, and Banai. There is a myth that Sai Baba came to Shirdi for a second time with a marriage party and set his foot under the banyan tree. Mhalspati, the priest welcomed him by saying "Aao Sai". There are two small shrines within the temple premises – one having Sai Baba's Idol and his charan padukas and another having the idol of Lord Khandoba's horse.

Next, you will sightsee Shri Sai Baba Sansthan Temple, one of the biggest pilgrimage sites in India. It is the holy abode of Shri Sai Baba. The spiritual aura of this place draws both Hindus and Muslims alike. This massive complex consists of Gurusthan, Khandoba Temple, Chavadi, Samadhi Mandir, Lendi Garden, Dwarka Mai and many more temples. ,/

Thereafter, proceed to Shani Shingnapur which is a Jeet Devasthan (alive temple). It is well-known for the magical and powerful Lord Shani who is believed to reside in a black stone till date. The trust of people in the lord is so strong that none of the houses in the village has doors and locks. It is because people believe that Lord Shani always protects their valuables from thieves. The enthusiasm and vehemence of the devotees rise to the next level on every Saturday, Shri Shaneshchar Jayanti and Amavasya. Later, you will leave for Aurangabad which is located at a distance of 80 km.

Stay overnight at the hotel and relax.

The 4th of your Jyotirlingas in Maharashtra tour package starts with a journey to Grishneshwar Temple which is about 30 km away from Aurangabad. This place is regarded as one of the 12 Jyotirlingas and is a popular destination for the devotees of Lord Shiva. Rani Ahilya Bai reconstructed this temple during the Mughal period. This temple exudes matchless divine aura. This temple is also known as Grushmeshwara, Kusumeshwarar, and Ghushmeshwara. The hall of this shrine is located in the center and contains 24 pillars which tell various stories of Lord Shiva. It also has the carvings of the ten avatars of Lord Vishnu within the premises.

After that, you will leave for Nashik which is a religious Hindu city and host the Kumbh Mela after every 12 years. It is home to various exotic temples, waterfalls, forts, and vineyards. After reaching Nashik, check-in at your pre-booked hotel.

Retire for the night at the hotel.

In the morning, you will drive to Trimbakeshwar temple which is an ancient Hindu temple and counted as one of the most important Jyotirlingas out of the twelve. This temple is perched on the foot of Brahmagiri hills. This temple also mentions the power of Mrityunjaya Mantra that bestows immortality and longevity. Peshwa Nana Saheb, the Maratha Ruler built this temple in the 18th-century. The historic shrine stands as a perfect epitome of classic architectural style. The Jyotirlinga has three faces symbolizing Lord Brahma, Lord Vishnu, and Lord Mahesh. Kushavarta Kund is the symbolic origin of the River Godavari and considered as sacred Hindu bathing place.

Return to the hotel to have your breakfast. Complete the check-out process afterward. Drive back to Mumbai to reach airport/railway station for your onward journey.