The Rishikesh Meditation and Yoga Tour, comprising of 9 days and 8 nights, lets you benefit from Yoga and meditation sessions in Haridwar while enjoying the beautiful surroundings of the region. The tour starts from Delhi, where you will explore the history, heritage, and culture of the city. From various tourist attractions like Raj Ghat, Jama Masjid, and India gate, you will also have the opportunity of enjoying a rickshaw ride through the bustling Chandi Chowk market. You will also receive an astrology session in Haridwar. The tour also covers Rishikesh, where, apart from some sightseeing, you will get a chance to enjoy several thrilling activities including water rafting and bungee jumping. 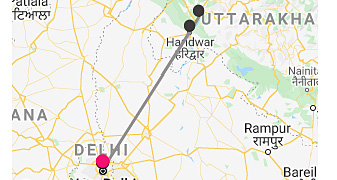 Your arrival at the airport is followed by a transfer to your hotel by our tour representative. The rest of the day is at your leisure. Delhi is one of the oldest inhabited and bustling metropolitan cities in India. Divided into two distinct parts- Old Delhi and New Delhi- the city is a true manifestation of medieval soul breathing in a new skin. The vibrant and dynamic vibes of the national capital will make you fall in love with this place. Delhi is the perfect blend of medieval and contemporary. The ancient monuments hold its ancient glory and downtowns of Delhi will transfer you to a different world within minutes. You can explore the local markets of Delhi and savor the local delicacies.

Early morning, have a delightful breakfast and then set out to explore the history, culture, and lifestyle of Delhi. The Delhi tour will start with a visit to the Raj Ghat first; it is the cremation site of Mahatma Gandhi and a peaceful place. After Raj Ghat, we will move towards Jama Masjid in Old Delhi. It is the largest mosque in Asia built by the Mughal emperor Shah Jahan. Near to Jama Masjid is the Chandni Chowk (Moonlight Square). If you want, you can get a tour of this ever-busy market riding an optional rickshaw. Later, you will drive past the Red Fort, India Gate, and President's House which are contrasting shreds of evidence of the medieval and modern India.

Late in the afternoon, visit Qutub Minar and Humayun's Tomb, two brilliant pieces of medieval architecture. Qutub Minar is the tallest stone structure in India built by Qutub-Ud-din-Aibak, the erstwhile Tughlaq ruler. On the other hand, Humayun's Tomb is a mausoleum that was built by the widow of Mughal Emperor Humayun after his death. Before returning to the hotel at night for an overnight stay, you will also visit Laxmi Narayan Temple in Delhi.

Overnight stay at the hotel in Delhi.

Early morning, you will start your on-road journey to Haridwar. By the afternoon, you will reach the holy city of Haridwar where our tour representatives will welcome you and escort you to your hotel. As the rest of the day is free, so you can spend it either exploring local markets or strolling along the Ghats. In the evening, a meeting will be arranged with the Yoga instructor who will give a briefing about yoga and provide basic yoga lessons. An astrology session with an astrologer is also arranged in the evening. Afterward, proceed to the Ghats besides the Ganges to witness the mesmerizing view of the evening Aarti there.

Later, return to the hotel for leisure and overnight stay in Haridwar.

Your stay in Haridwar will start with a rejuvenating breakfast and then a morning yoga session with expert Yoga trainers. Yoga is one of the most ancient sciences that originated in India, adherence to it yields wellness of body and mind. It is a physical, mental and spiritual discipline that is based on the Yoga Sutras of Patanjali. In Yoga, it is believed that meditation and a disciplined lifestyle can lead to spiritual insight and tranquility.

After the Yoga sessions, the latter part of the day will be spent in exploring the holy city of Haridwar. This holy city is located next to the banks of the Ganges and the evening Aarti at the Ghats is truly a sight to behold.

Return to the hotel for an overnight stay in Haridwar.

After refreshing morning breakfast, experience a charging Yoga session in the majestic city of Haridwar. Later, embark on an adventurous half-day excursion to the city of Rishikesh which is situated just 20 kilometers from the city of Haridwar. Rishikesh is a great place to savor some of the most spectacular vistas of landscape and also to enjoy thrilling adventure activities like water rafting, bungee jumping, etc.

After an explorative tour to Rishikesh, you will be taken back to Haridwar to relax and stay overnight.

Like other days, these two days will also start with a refreshing breakfast and then an energizing Yoga session amid the tranquil backdrop of the Ganges. The rest of the day is free; so you can spend it your way. You can attend the Ganga Aarti on the Ghat in the evening or soak in the spiritual vibes of the city by visiting the temples or ashrams.

The night stay is arranged in the hotel in Haridwar.

This day, you will be offered an in-time transfer to get back to Delhi. After reaching Delhi, our team members will meet you and assist you to board flight for your onward journey.