Entry Fee: Rs. 20 for Indian Nationals and Rs.100 for foreigners

Best Time to Visit: Throughout the year except July and August

The Sariska National Park has the distinction of having quite a few tigers and other interesting flora and fauna. The Sariska National Park is known especially for its tigers. The latest census of the wildlife of the park indicates that there are about 35 tigers at Sariska. The most frequented place of the wild inhabitants of the park is the many water holes of the park. A 'hide' can be booked to watch and photograph these animals in their natural environment. These hides overlook the various water holes of Sariska.

The Sariska National Park is near Alwar in the state of Rajasthan. The Aravali Hills can be seen in the backdrop. Sariska Tiger Reserve is nearest tiger reserve to Delhi, Sariska Tiger Reserve has a beautiful location and Aravali hills and Kankarwadi Fort makes it more beautiful. Access road to Sariska is in very good condition now and one can reach easily from Delhi via Dharuhera, Alwar and Sariska.

The park is spread over an area of 866 square kilometers. Before independence the reserve was a part of the erstwhile Alwar state that served as a hunting ground for the royalty. In the year 1955, it was unlawful to capture, hunt, trap, snare and shoot any kind of animals. In the year 1958, the reserve was upgraded into a sanctuary. The park came under the Project Tiger in 1979 and became a national park in 1982.

The hills and narrow valleys of the Aravali hill range forms the topography of Sariska. The vegetation of Sariska includes Dry Deciduous Forests, Scrub-Thorn Arid Forests, Grasses and Rocks. The wide variety in the wildlife of Sariska is a fine example of ecological adoption and tolerance.

Tourists can visit the reserve all around the year except during July and August when the animals move to a higher ground. The best time is from November to June. The months of April, May and June are extremely hot but offers a very good sight. Some migratory birds can also be spotted at the time of winters.

Jeep is one the best ways to view this park. These jeeps are available at a cost of Rs. 500-600 and can be hired from the Forest Reception Office.

Important Information for the Visitors
Around Sariska Tiger Reserve

The Sariska Wildlife Sanctuary is rich in history as well. The ruins of medieval Hindu temples dedicated to Lord Shiva are found within the park. The ruins of the 10th century AD temple Garh-Rajor are scattered all over the forest. You can have a panoramic view of the birds of Sariska in flight from the 17th century AD castle set on a sharp hilltop at Kanakwari. A palace built by the erstwhile Maharajas of Alwar has now been converted into a hotel. Jaipur is 107 km away from Sariska National Park. The city should be visited for its magnificent forts, palaces and museums.

The Sariska National Park is well connected with the major cities of Rajasthan and neighboring towns and cities.

By Air: The nearest airport to Sariska Tiger Reserve is at Jaipur which is only 110 kms away from Sariska.

By Rail: The nearest rail junction is Alwar which is at a distance of 35 km away from Sariska.

By Road: The road network is very good with frequent bus services between Delhi and Jaipur via Sariska and Alwar. Tourists can drive conveniently to Sariska Tiger Reserve on their own vehicle or a hired car from the neighboring cities. 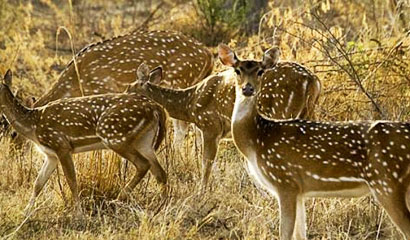