Sunderbans National Park is located in the state of West Bengal. It is a biosphere reserve and tiger reserve which has been declared a World Heritage Site by UNESCO in 1987. It is located near the Sunderbans Protected Forest and its neighborhood is Bangladesh. This sanctuary is surrounded by seven rivers and a large number of Royal Bengal tigers are found here. A land of art, culture, and heritage spread over 1330 square km, the flora of this beautiful national park consists of green mangrove forests. A unique type of tree is found in this forest.

In addition to the Royal Bengal Tiger, this National Park has over 58 species of mammals and more than 250 beautiful birds and over 55 species of snakes. One can see Wild Boer, Indian Gray Mongoose, and Pangolins, etc. in this sanctuary. This wooded area attracts a large number of birds such as kingfishers, fezent-tailed jacanas, pariah kites and whimbrels.

Sunderbans National Park is located on a beautiful Sunderbans delta on the Ganges River in the state of West Bengal. Many species of animals are found in Sunderbans National Park, some of which are King Krebs, Batagur Baska, Olive Ridley, and Turtle. One can also see giant lizards, wild boar, spotted deer and crocodiles in these forests. The most prominent attraction of Sunderban Park is the Siberian ducks. Small organisms found in water in the Sunderbans are called phytoplankton that glows in the dark. The Sunderbans are particularly known for tigers in the world. The tigers found here have adapted themselves to drinking saline water. Rhesus macaques, fishing cats, chital, wild boar, small Indian civet, leopard cats, common otter, and black finishes porpoise are found. Two types of dolphins are Gangetic dolphins and Irrawaddy dolphins in dolphin river water.

You can enjoy some of the major safaris here during your visit to Sunderbans National Park and make your trip successful and thrilled. Boat safaris in Sunderbans National Park are operated by the government, which are available in small and large forms. Boat safaris can be booked for a day or even longer. A 2-night cruise operated by the West Bengal Government takes you on a journey up to Sajnekhali, Sudhanikhali, Jhingakhali, and Dobanki the Watchtower. If you wish, you can also enjoy here on private cruise tours.

NOTE: Local tourists can visit Sunderbans National Park for a minimal fee. Whereas foreign tourists have to take a special permit by Kolkata Forest Office which is required to be presented to the Forest Officer at the time of entry and this permit is valid for 5 days.

How to reach Sunderbans National Park?

Air: Netaji Subhash Chandra International Airport is the nearest airport from this National Park, which is 115 km from Kolkata. This airport is connected to major cities of India like Ahmedabad, Bangalore, and Delhi, etc.

By Rail: Kolkata Railway Station located in Kolkata is the nearest railway station to this park. You can easily get a train from Kolkata to Canning. And you can reach Sunderbans from Canning Railway Station as it is located at just 30 km from the national park.

By Road: State government buses are available from the nearby major places to reach the Sunderbans. The road from Kolkata to National Park is well maintained.

The months of December to February are the perfect time to visit Sunderbans National Park. The weather in the park is cool and pleasant during this time and it is considered to be the best time to see wildlife.

Due to being close to the Bay of Bengal, do not visit Sunderbans National Park from mid-June to mid-September. The park receives heavy rainfall at this time.

Sunderbans National Park Timings:Boat safaris are conducted seven days a week from 8:30 am to 4 pm. The boat is not driven after 6:30 in the evening.

Sightseeing and Things To Do in Sunderban 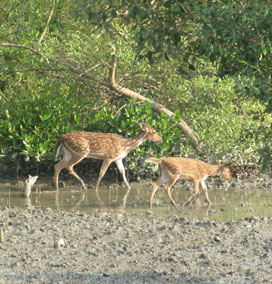 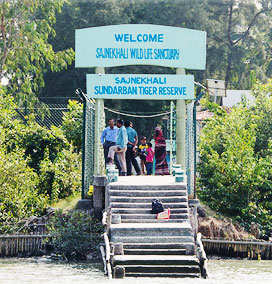 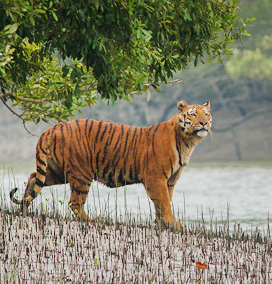 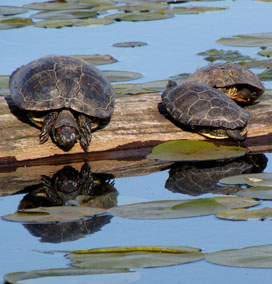