The Shri Krishna Janmabhoomi Temple complex is considered as the important pilgrimage destination in Mathura, Uttar Pradesh and also the focal point of Lord Krishna. It is situated near the Deeg Gate Chouraha, Janam Bhumi. It holds great significance for the Hindu devotees as it is believed to be a birthplace of Lord Krishna. When the tourists enter into this temple, the divine ambiance, peace, spirituality, calm and its purity fill their heart with conviction.

This temple was first built by Vajra Nabha, Lord Krishna’s great-grandson and has been rebuilt several times in the passing centuries. This temple is also destroyed multiple times by numerous kings. The present temple is the home to the delightful paintings which are adorned and depicts the Lord Krishna’s life events. And the temple houses the idols of Lord Krishna and his beloved Radha.

Mathura Krishna Temple is built around the prison cell in which Lord Krishna was born after his parents Vasudeva and Maa Devaki were imprisoned by his evil uncle Kansa. The complex of the temple consists of a small shrine that is dedicated to Lord Krishna and is adorned with ornaments. Besides, there are numerous temples such as Garbha Griha Shrine, Keshav Deva Temple, and Bhagavat Bhavan. The Keshav Deva Temple is situated in the south of the Shahi Mosque and was constructed by Ramakrishna Dalmia in 1957 in the memory of his mother, Jadiadevi Dalmia. This temple was inaugurated by Hanuman Prasad Poddar in 1958. Besides, Garbha Griha Shrine is the place of the prison cell and consists of a shrine that is dedicated to eight-handed Goddess Yoga Maya. This is situated against the rear wall of the Shahi Mosque.

Furthermore, the Bhagavat Bhavan is dedicated to Shrimad Bhagavat and the construction of this temple was started in 1965. This complex contains five shrines - the main shrine consists of 6 feet tall statues of Radha and Krishna, the shrine of Balarama, Jagannath and Subhadra on right, the Rama, Lakshman and Sita Temple on left, the temple of Goddess Durga, the temple with Shivalinga, and Chaitanya Mahaprabhu and Garuda Stambh is in front of the Jagannath Shrine. Also, there is a circumambulation path whose walls are embedded with texts from Bhagavad Gita.

In addition to it, there is a large water tank which is called as the Potra Kund. According to Hindu Mythology, it is the first bath place of Lord Krishna. Apart from it, Krishna Janam Bhumi, Mathura also accommodates other prominent buildings that are International Guest House, Ayurveda Bhavan, library, shops, and open space for several performances.

It is basically situated in the heart of the city so that the visitors can easily be reached by cab or auto-rickshaw. Take a visit to the Krishna Janmabhoomi Temple at the time of festivals like Holi, Janmashtami, Deepavali, and Basant Panchami which are celebrated with great favor. 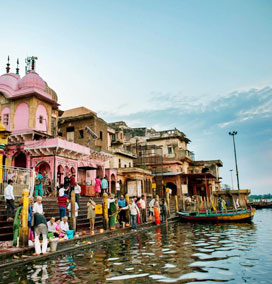 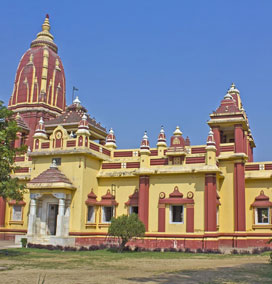