Tanjore was once the capital of prominent South Indian rulers the Chola rulers. A city that was one of the richest cities in the world when it was at its zenith, today Tanjore lies in ruins. But still, it has the charm to attract thousands of tourists from all over the world. The most prominent tourist destination of Tanjore is the big temple or the Brihadeshwara Temple.

Now you might have the question that the Brihadeshwara Temple at Thanjavur was constructed by which king? The most celebrated Chola ruler Raja Chola I built this beautiful temple more than a thousand years ago in 1010 A.D.

The Brihadeshwara Temple of Tanjore is also known as Rajarajesvaram or Peruvudaiyār Kōvil or the big temple in Tanjore. Although the temple is much older, the fortified walls that have been built to protect the temple from Invaders are believed to have been built relatively later during the 16 century.

The entire force of Chola architectural ingenuity hits you in the face when you see the Brihadeshwara Temple. Just consider the case of the tower that is built above the sanctum sanctorum of the Garbha Griha. This tower is 216 feet tall and is considered to be one of the tallest towers of this kind in the entire world.

The Kumbha that is seated on the top of the temple is carved out from a single rock and weighs almost 80 tons. The cupola of the temple is another shining example of the architectural brilliance of the Chola rulers as one cannot see the shadow of the cupola on the ground!

The sacred bull or Nandi that is considered to be the Vahan of Lord Shiva is another architectural feat as it is carved out from a single Rock, weighing 25 tons and has huge dimensions of 12.5 x 8 x 5 feet. The main lingam is in itself gigantic in proportions as it is 13 feet tall with a circumference of 54 feet.

One of the largest temples in the world, the Brihadeshwara temple is a shining example of the Dravidian architectural style. The entire temple is made from granite and the nearest source of granite is around 60 kilometers from the temple. Imagine how the Chola architects and Temple builders managed to build this huge temple complex within a relatively short span of just 7 years.

UNESCO has declared the Brihadeshwara temple as a world heritage site, calling it one of the "Great Living Chola temples" with the other two being the Gangaikonda Cholapuram and the Airavatesvara temple.

You can plan you to the Brihadeshwara Temple with the Indian Visit to experience the artistic and architectural excellence of the Chola rulers.

How to reach Brihadeshwara Temple

Located on the South Bank of the River Kaveri, Brihadeshwara Temple is situated at a distance of 2 km from the Thanjavur Junction. Thanjavur is well connected with the major cities of South India from numerous trains. There are well maintained national highways that connect the city to Tiruchirapalli, Coimbatore, and many more.

The best time to visit Brihadeshwara Temple is during the early hours when the weather remains pleasant and cool breeze makes the tour comfortable. The winter season is the perfect time to visit the city.

Places to visit near Brihadeshwara Temple

Tanjore is one of the prominent places for the South Indian religion, art, and culture. There are a plethora of places to visit near Brihadeshwara Temple which includes Shiv Ganga Garden, Vijayanagar Fort, Gangaikonda Cholapuram, etc.

Sightseeing and Things To Do in Tanjore 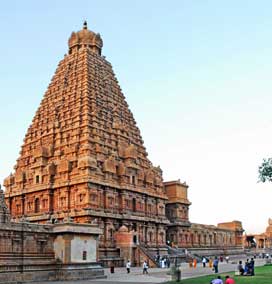