Situated right at the end of a remote hill, Ajmer Sharif Dargah, the Tomb of Moinuddin Chishti is the most frequently-visited religious site in India. The Dargah which was constructed by Mughal Emperor Humayun is not only a holy place for Muslims but devotees from all the religions flock here and seek blessings from the Sufi saint. It is believed that the Moinuddin Chishti was Muhammad’s honest descendant. On Muhammad’s request (in a dream), Moinuddin came from Persia and dedicated his life to help the poor and downtrodden. Another legend said that he reached Ajmer in 1192 via Lahore and stayed there till his death in 1236 AD.

Apart from the historical aspects, there is too much to explore at the world-famous Ajmer Sharif Dargah. The holy shrine houses many attractions like tombs, courtyards and Daalaans. The main among these are a massive gate called Buland Darwaza at the entrance and the mausoleum where Moinuddin Chishti's Tomb is placed. Besides, there is also a mosque and a big cauldron where devotees donate money, which is used to feed the poor and needy people.

In addition to the magnificent place, the atmosphere of Ajmer Sharif Mazar is divine. It has wonderful Mughal architectural carvings. The spellbinding Qawalis and the heavenly aroma of incense sticks all around will surely make you connect to your spiritual self.

One of the most famous and best things to do in Ajmer Dargah is offering a “Phoolon ki Chaadar” over the Sufi saint’s tomb. Tying a thread at the shrine is believed to fulfill all your wishes. So if you want to make your wish come true, then step out to the shrine and make a wish with a pure heart. Ajmer Khwaja Garib Nawaz will surely make all your dreams come true.

Celebrated in Rajab, the seventh month of the lunar calendar, the “Urs Festival” is reckoned as the most auspicious and special. The six-day long annual Urs Festival which held at the Khwaja Garib Nawaz Dargah proceed with an array of wonderful events like Ziyarat, Flag Hoisting ceremony, the opening of the Jannati Darwaza, Qawali performance, Candle Lighting ceremony, the  performance of the Qalandars, Chhati Sharif, Badhaawa, Canon Firing and Bada Qul. No doubt, thousands of devotees from all castes and religions visit Ajmer during the Urs Festival commemorating the death anniversary of the Sufi saint. Devotees love to pay homage to the saint and seek spiritual enlightenment.

There is no entry fee for visiting the Ajmer Sharif Rajasthan.

The best time to visit the Ajmer ki Dargah is during the annual Urs Festival. If you’re not able to plan your trip on Urs, then you should visit the dargah in winter instead of summer. As summer season in Rajasthan is hot and dry. Winters are much more pleasant and comfortable and usually start from October and end till March.

Dress simply and maintain the decency. It is favored that the women cover their heads with a scarf, dupatta or any other cloth. Be aware of the beggars here who can be very persistent.

Sightseeing and Things To Do in Ajmer 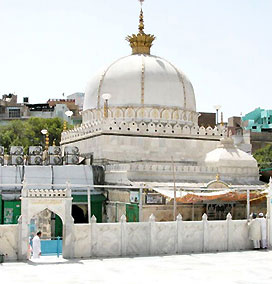