Amritsar, the largest city in Punjab is probably most well-known as the home to the holiest shrine of Sikhism - the spectacular Golden Temple, or the Harmandir Sahib Gurdwara. Amritsar was founded in 1577 by Ram Das, he was the fourth Guru of the Sikhs. Golden Temple Gurdwara is built on a site which was granted by the Mughal emperor Akbar. Guru Ram Das ordered the excavation of the sacred tank, or pool called the Amrita Saras (“Pool of Nectar”). He believed that the water of the lake had healing powers. Amritsar got its name from Pool of Nectar which is considered to be Amrit or sacred and from the term Amrita Saras. The Amritsar travel guide will give you all the details of this popular city in Punjab.

The Golden Temple is constructed on an island which is located in the middle of the holy pool. During the reign of Maharaja Ranjit Singh, the upper part of the temple was decorated with a gold-foil-covered copper dome, and this is the major reason due to which this place is popularly known as the Golden Temple. It is believed that if someone takes a dip in the sacred pool then all the sins of that person get washed off. Amritsar is one of the most popular tourist sites and a place where one can learn about the history of Sikhism. It was annexed to British India in 1849.

Amritsar is a famous place when it comes to divinity, religion, and cultural heritage, the national integrity of India and India’s struggle for independence from British rule in the early 20th century. It was in Amritsar that the clarion-call for the liberation of India sounded louder and clearer.

A short distance away from the Golden Temple complex is a spacious park, Jallianwala Bagh, which is an important place to be mentioned in the Amritsar tour guide.

Jallianwala Bagh is the place where British colonial government troops fired on a crowd of unarmed Indian protesters on April 13, 1919, and eventually killed the 379 people and left more than 1500 wounded in this incident. The place still has bullet marks and bloodstains in and around the well into which people jumped to escape the gunshots. Amritsar is divided into old and new parts and the Golden Temple is located in the old part. The temple's management committee operates frequent free shuttle buses regularly from the railway station to the temple complex.

Amritsar is a center for the textile and chemical industries and also engages in food processing, silk weaving, tanning, canning, and the manufacture of machinery. The city has been the home of the handloom and carpet industry for more than a century. Amritsar is the second-largest milk plant in the country. Amritsar city guide will show you that the city is not just bhangra or giddha, Sarson ka saag, and Makki ki roti, but it is an attitude and a way of life. With the Amritsar tourist guide, people can get all the details and a deep insight into the city which can help them to plan their Amritsar trip. Learn more about Tourist Attractions in Amritsar.

Sightseeing and Things To Do in Amritsar

The best time to visit Amritsar is during the winter season when the weather of the city remains calm, cool, and pleasant for the city tour. People can take part in several celebrations during this time and learn about the cultures of the city.


How To Reach Amritsar

Amritsar is one of the major cities of Punjab and is well connected with the rest of the country. It is being thrived by a large number of visitors. Here we have mentioned how to reach Amritsar by all modes of transports. Take a look at the brief and then plan your Amritsar trip accordingly.

Other Places to Visit in Punjab 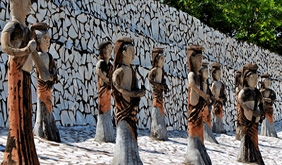