Experience the best of Asia with Singapore to Bali package. This Singapore Bali Cruise Tour is an interesting intermix of both these destinations. The itinerary has been planned to give you an insight into the varied sides of Asia. Singapore offers experiences like the Night Safari in the world’s first nocturnal zoo, enjoying at the Sentosa Island and the Universal Studios (theme parks). On the other hand, Bali offers more of watersports activities and fun and leisurely time for the tourists to enjoy among themselves. To explore the best of both the destinations, it is an ideal way to book this 8 Nights / 9 Days Singapore Bali tour for enjoying in a way you dreamt of it. 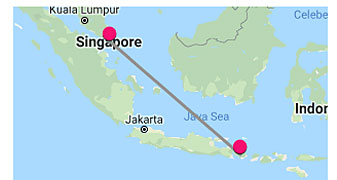 Arrive at Bali Airport. Meet our tour representative and get assisted transfer to the pre-booked hotel. Bali, a beautiful archipelago showcases a perfect confluence of simplicity and modernization. It is known as the paradise on Earth. After coming out of the airport, you can marvel at the iconic statue depicting the fight scene between the Karna and Ghatotkacha, two notable characters from the epic Mahabharata. Almost everybody who has visited Singapore and Bali might have seen this statue close to the airport.

After the check-in formalities are completed at the hotel, spend the rest of the day leisurely. Or else, go out to savor delicious delicacies of Bali. And if you are a chocolate lover then Bali is your place to visit and one can buy some organic chocolates from here. Bali is also famous for its handicrafts, fancy silver jewelry and fragrances.

Begin the second day of your Singapore with Cruise and Bali tour with a visit to Tanjung Benoa. This famous white sand beach is also called as Benoa peninsula. It has a long stretch of about 5 kilometers. It was one of the villages of the local fishermen. But with the passage of time, the village has been lately transformed into a luxury resort area of Bali. Some of the water sports activities which you can try in Tanjung Benoa are Bali Jet Ski ride, scuba diving, sea waling, single parasailing, etc.

Stop for a while partaking in enthralling activities and have a delicious lunch served at an Indian Restaurant. After lunch, leave for the Blue Point Beach. The beach is packed with foreign tourists from all over the world. This beach is a paradise for surfers to try their hand on surfboarding. The waves are large and break the silence around the beach.

Head to the next destination to view the awe-inspiring sunset from the Cliff next to Uluwatu Temple. A Balinese Hindu sea temple, Uluwatu Temple is referred to as one of the Sad Kahyangan. The temple is dedicated to Sang Hyang Widhi Wasa and demonstrate him as Rudra. The temple is built at the edge of a 70-meter-high (230 ft.) cliff or rock projecting into the sea. According to the legend, this rock is said to be part of Dewi Danu's petrified baroque.

In the evening, enjoy the magnificent Kecak Dance Performance. The dance performance is based on Ramayana. It is performed every day in Uluwatu Temple at 6 pm on the cliff-side. The dance is performed outdoors and thus allows to marvel at the astounding sunset views.

Return to the hotel for the night stay.

After a delectable breakfast, head to the Kintamani Volcano where you will spend the entire day. A trek to the Kintamani volcano or Mount Batur, in particular, is a very popular trek. The charming Mount Batur is surrounded by the 13-square kilometer Batur Caldera Lake. Those who are fond of adventure can travel on a twisty road down the coastline.

Explore the famous Batuan village, Mas village and then past the Celuk village to visit and get acquainted with the lifestyle of the locals. The Batuan town is bounded by streams flowing through gorges. Mas village is known for its woodcarvings. Mas is home to the celebrated Tilem & Nyana Gallery. The region is also the hometown of the famed Mask Carver Ida Bagus Sutarja. They are respected artists and still, produce unique artwork in the I.B. Sutarja – Mask Carver- Gallery. Celuk village is a very well-known place for crafts in gold and silver and you can buy it at very affordable prices from here. The next visit is to the historical Hindu temples in Bali.

Delicious food will be served for lunch. End your day with the visit to the famous Ubud Market. The Ubud Art Market is locally called as the 'Pasar Seni Ubud'. Here you can find gorgeous silk scarves, handmade woven bags, lightweight shirts, hats or baskets kites, statues, and many other hand-crafted goods.

You can also opt to witness the Barong Dance performance. The Barong dance is really a spellbinding exhibition of graceful movements and bright colors. Barong dance is an art form of storytelling that features the mythical fight between good and evil.

Return to the hotel and stay overnight.

On day 4 of Singapore Extravaganza with Cruise and Bali tour, savor breakfast and check out from the hotel. Thereafter head towards the airport to start Bali to Singapore journey. As you arrive at Singapore airport, our representative will greet you. The representative will assist you to check-in at the hotel. You can rest for a while. After that, you will head for the Night Safari at the world's first nocturnal zoo. It is one of the most sought-after tourist attractions in Singapore. The park currently houses over 900 animals representing over 100 species, out of which, 41% are threatened species. The Night Safari is managed by Wildlife Reserves Singapore and about 1.3 million visitors visit the park every year. The Night Safari is planned in a complete open-air zoo set in a humid tropical forest that only opens at night. It is divided into 7 geographical zones, which can be discovered either by walking on the trails or by tram.

Night stay at the hotel.

After sumptuous breakfast, head out for a tour to the Colonial Heart. The Colonial District is one of the famous tourist attractions in Singapore. It is because of its geographical position. It is built on the Singapore River. The city's most famous landmarks are situated here like the Saint Andrew's Cathedral, Supreme Court, City Hall, Singapore Art Museum and Parliament House.

If you're in the Civic District, you cannot miss the imposing tower and spire of St Andrew's Cathedral. This is, after all, Singapore's largest cathedral and the oldest Anglican house of worship. It is a stellar example of colonial-era architecture and heritage.

Supreme Court now forms the central core of the Empress Place Building which is occupied by the Asian Civilizations Museum. The public can visit the Supreme Court of Singapore to understand the country's court system and the significance of the Supreme Court.

The City Hall in Singapore is a national monument. It was designed and constructed by the architects of the Singapore Municipal Commission. A flight of stairs takes visitors from the Corinthian colonnade to the main building.

The Singapore Art Museum housed in a restored 19th-century mission school opened its doors in 1996 as the first fully dedicated visual arts museum in the country. It is committed to create meaningful encounters with art for all visitors, through their exhibitions, research, publications, public and educational outreach. It has the world's most important collections of contemporary art by artists from Singapore, Southeast Asia, and Asia.

The Parliament House of Singapore is a public building and a cultural landmark. The building was constructed to signify the modern architectural expression of stateliness and authority.

Later on, pay homage at the oldest temple in Singapore, Thian Hock Keng Temple and Fukien or Hoklo Temple.

Thian Hock Keng Temple is Singapore's oldest Chinese temple steeped in heritage and is a must-visit for history aficionados and those curious about the oriental culture. The Thian Hock Keng Temple in Singapore is dedicated to Mazu, the Goddess of the Sea. In the temple, marvel at the remarkable architecture in the traditional southern Chinese style.

Hoklo temple has a special difference from the styles in other regions of China. The top roof is high and tilted with extravagant fine details of decorative inlays of wood and porcelain. The main halls of Hoklo temple are regularly adorned with two dragons on the ridge at the far left and right corners and there is a small figure of a pagoda at the center ridge.

Next, you will visit the Marina Bay. The Marina Bay is spread across a 360-hectare area adjacent to the Central Business District. It is also called as the new downtown of Singapore. It consists of a new eco-friendly visitor center and the Helix connecting Bayfront to Marina Centre where the Youth Olympic Park is situated. The Point at Marina Bay (formerly known as Central Promontory Site) will be used as a public space for activities such as theatres and carnivals.

Enjoy your evening on board. Spend your night on the cruise.

In the morning relish the delicious American breakfast on the cruise. Grab the opportunity to explore the boutique-style accommodation with indulgent comfort and leisure, exclusive services, and exquisite dining. You will enjoy world-class entertainment and participate in the onboard activities of the cruise. Watch the azure waters. Eat delectable meals at inclusive restaurants.

A comfortable overnight stay is arranged on the cruise.

Day 7 you will disembark the cruise and check-in at a hotel in Singapore. Eat your breakfast and relax for a while. Then leave for the Sentosa Island Twilight Tour. The tour includes the visit to the S.E.A. Aquarium, Merlion Tower, Butterfly Park and the Insect Kingdom on a one-way cable car. The island is a network of nature park heritage center, tropical attraction.

Sentosa Island is the State of Fun. Its pristine beaches, exciting attractions and tropical landscapes, exude their own unique charms.

S.E.A. Aquarium allows you to explore the fascinating world of marine life. Enter and discover the marine kingdom at S.E.A. Aquarium. It houses over 100,000 marine animals and there are more than 1,000 species dwelling in 50 different habitats.

The fabulous Merlion is a half lion and half fish guardian of prosperity, which illustrates the history of Singapore as a port city. It is a 37-meter mythical creature to be precise. The lion depicts the folklore of Prince Sang Nila Utama's rediscovery of the lion while the fishtail symbolizes the ancient fishing village of Temasek, meaning "sea" in Javanese.

A day of fun at Sentosa is not complete without a spectacular Award-Winning Outdoor Night Show. The Wings of Time show depicts an epic tale of mystery, courage, and magic which will keep you on the edge of your seat.

Embarking on the Sentosa Cable Car is a great way to get to Sentosa Island from Singapore as you will have an amazing view of both islands. It is also a fantastic way to navigate around Sentosa Island whilst you are there.

Return to the hotel and stay overnight in the room.

On this day of Singapore with cruise and Bali tour, you get set for another surprise. Head towards one of Singapore's major attractions, The Universal Studios. It is a theme park situated on Sentosa Island. The main features of this theme park are that there are 28 rides, shows, and many more attractions in seven themed zones.

After enjoying till your heart's content, return to your hotel for an overnight stay.

After eating a healthy breakfast, spend the day leisurely. Today is the last day of the Singapore Bali tour. You can roam around in the local market of Singapore. It is famous for many things which you can buy and take home such as souvenirs of miniature Merlion, Orchid Perfumes and Coconut Jam and from all of them, pressed pennies are the best option you can go with. After a while, our representative will guide you to the airport. Board the flight for your journey back home.