Bali is a paradise island in the far East. From the heights of volcanoes to lush green paddy fields, from tropical forests to the ancient temples and white sandy beaches, the Bali has it all in abundance. Our 5 days tour in Bali includes the Best of Balibundled into an unforgettable experience.

Divided into 8 provinces, the Island boasts of diverse terrains and cultures. As a part of the Bali island tour, you will get to see the historical relics and age-old Hindu temple complexes established by the Kings of the bygone era spread across the archipelago in picturesque locales. Tanah Lot, Besakih Temple and Tirta Empul are famous temples in Bali.

The Ubud and Kintamani Provinces are the main areas of interest and form the main part of our Bali tour. Mount Batur with its active volcano and Batur Lake offers the pristine beauty. The traditional villages of Mas, Batuan, Celuk, and Penelokan along the route from Kintamani to Ubud showcase the craftsmanship of the people of Bali. The Bali Island tour is incomplete without a trip to the beautiful rice terraces of Tegallalong.

We travel further South to Tanjung Benoa through the Monkey Forest and reach the white sandy beaches of Peninsula Bali. You can participate in a myriad of marine activities like jet-skiing, parasailing, snorkeling, etc. 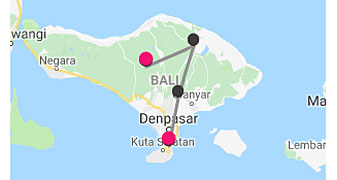 After landing in Bali, you will be greeted by our tour representative who will assist you in your chosen hotel. As you exit the airport, you will see the magnificent statue from the momentous scene of the Mahabharata. The statue represents the scene of the battle between Ghatotkach and Karna at Kurukshetra.

After a quick refreshing stop at your hotel, you will be immediately whisked away on your Bali Island Tour. On day 1 of the tour, you will visit the iconic temple of Tanah Lot, the temple "In the Sea".

Tanah Lot: This temple was established by a priest from East Java named Dang Hyang Nirartha and he was hail from the Majapahit kingdom. Generally, the temple is accessible only during the low tide. Otherwise, pilgrims can wait in the well-equipped onshore temple complex at Beraban. The best time to visit is dusk when you can enjoy the breathtaking views of the temple with a stunning sunset in the background.

Later in the evening, you will return to the hotel for a hearty dinner.

Overnight stay at the hotel in Bali.

After having a hearty breakfast, you will head out towards the Kintamani Province. Today you will visit to see some of the most picturesque spots. You will visit the traditional villages of Mas, Celuk and Bali Batuan. After lunch, the Bali Island tour further takes you to the notorious volcanic peak of Mount Batur and the Lake Batur. The day is completed with the visit to the ancient relic of Goa Gajah, the Hindu Temples of Pura Besakih and Tirta Empul. These are the most popular and well-frequented spot in the Bali Tour Package. You will get a glimpse of the local Barong dance. After visiting the temple, some breathtaking photographs of the lovely landscape and the temple with the ornately traditional Angkul-Angkul gates can be taken.

Celuk Village: Also known as the Sukawati. This Balinese village has come to prominence because of the long-established craftsmanship in gold and silver work by the local people. Almost all the villagers are perfect in this craftsmanship and they pass over the skills to their generations. The whole population of this village is of professional artisans. This quaint village is about 5 km from Den Pasar at the entrance to Gianyar Province. All along the village length, stretching up to 2 km, shops line up in the street selling hand-made jewelry both as retail and wholesale to the international market.

Bali Batuan Village: With more than a thousand-year history, this Balinese village is famous for unique Bali paintings. Bali means 'rock' as inscribed in Pura Desa Batuan in 1022 AD, giving this village its name. Around 7Kms North of Den Pasar and 10 km from Ubud, the people of this village specialize in 'Wayang' style of painting – a two-dimensional depiction of humans and supernatural.

Mas Village: It is about 6 km south of Ubud. This East Bali village has a tradition in wood and mask carvings. It is home to many international woodcarvers like Ida Bagus Nyana, his son Ida Bagus Tilem and masks carvers like Ida Bagus Sujarta, his wife and their children too. Nyana and Tilem are famous art galleries in the vicinity. The villagers are not only artists but also keep up their traditional occupation of agriculture as is evident from the acres of paddy fields that stretch as far as the eye can see along the route.

Goa Gajah: Goa Gajah, located around 6 km from Bedulu village. It is an archeological site with figureheads from the 8th Century to the 10th Century. Though up to some extent the Buddhist sculptures are present here, for the most part, Hindu figures dominate. The name comes from the proximity of River Petanu which was earlier known by the name Lwa Gajah.

Besakih Temple: Pura Besakih temple complex is a group of temples nestled on the South Western slopes of Mount Agung. This is considered to be the largest and most sacred Hindu temple in Bali. Boasting of lovely Balinese architecture, this is called the "Mother Temple" existing for more than 1000 years.

Tirta Empul Temple: This is a National Heritage site. It is famous for a 'Holy water spring' with curative and therapeutic properties. The locals come here to bathe in the springs and it is a ritual to take a purification bath here. In all temples in Bali, it is mandatory to wear a sarong and sash.

Later in the evening return to the hotel and have a delicious dinner. Overnight stay at the hotel in Bali.

We continue our enchanting Bali Tour on Day 3 after a hearty breakfast. The day's activity is in the Ubud Province of Bali. You will visit The Ubud Royal Palace, Ubud Monkey Forest, Pura Taman Saraswathi temple and the Tegenungan waterfalls. Later a pleasant drive to the Tegallalong rice terraces will treat your eyes. The afternoon is reserved for shopping at the famous Ubud Art market or you can just relax in your hotel.

Puri Saren Agung: (Ubud Royal Palace): Puri meaning Royal or "House of Nobility". This is a prestigious building of typical Balinese architecture and a lovely garden. It was built during the reign of Late Ida Tjokorda Putu Kandel and well conserved by his heirs.

Tegallalong Rice Terraces: The time-honored method of terrace irrigation, called 'Subak'. It is still followed in the three main paddy growing Provinces of Bali. Tegallalong rice terraces are famous for the sheer beauty and the panorama of lush greenery. The irrigation system was passed down by a holy man named Markandeya in the 8th Century and is still being followed as the best system for this type of terrain farming.

Ubud Monkey Forest: The forest is a natural sanctuary and it is home to over 700 long-tailed grey Macaques. The Forest is considered as the Sacred Monkey Forest. The Sanctuary is run by the Padangtegal village. Its official name is 'Mandala Wisata Wenara Wana'. With a knowledgeable guide, you can venture deep into the forest and can see the mossy relics and statues of the Pura Dalem Agung Padangtegal, an ancient temple.

Pura Taman Saraswati Temple: This temple is situated off the main road of Jalan Raya Ubud. This is a lovely temple of Goddess Saraswati, the Goddess of Knowledge. The abode of Learning is surrounded by lily ponds and has a beautiful arched entrance. The style is typically Balinese; made of sandstone. Here you can watch the dance performance by classical artists in the evenings.

Ubud Market: This is a vibrant market of a myriad of hand-crafted items made locally in neighboring villages and is located opposite the Royal Palace of Ubud. Scarves made of silk, handmade woven bags and baskets, and hats, casual shirts, etc. abound in the shops. Authentic Balinese skirts called 'Ikat', paintings, wood carvings, kites, and statues can be purchased here.

After an excursion return to the hotel. Overnight stay at the hotel in Bali.

This day is reserved for fun activities and to relax in the sands of Bali's innumerable beaches. So get an early start with a satisfying breakfast. The Bali tour today will take you to the peninsula area of South Bali - Tanjung Benoa where all the marine activities are concentrated. Being a narrow peninsula, there are beaches on all sides with activities like jet-skiing, fishing tours, parasailing, banana boat rides, scuba diving, etc. For those who are not so adventurous, take a cabana and sunbathe or play in the calm sea. To practice your culinary skills you can learn a bit of traditional Balinese cooking at the cooking school. Make Balinese cake and rice flour dumplings with ingredients you can buy at the local market which is an experience in itself.

The next stopover will be the Caow Eng Chinese Temple and then you will visit Uluwatu Temple. Enjoy the Kecak Dance here. It is a traditional Balinese art performance. It is famous for its dominant chanting or 'fire dance'.

Tanjung Benoa and Blue Point Beach: The 3 km stretch of coastline is famous for all types of adventure sports. Along the eastern coastline, the sea is calmer and ideal for sports. Normally the Northern beaches play as host to water sports while the South coast is more frequented for snorkeling and swimming as the waves are calmer. The clean, white sands are tempting to just laze and sunbathe.

Caow Eng Bio Chinese Temple: This is one of the oldest Chinese temples built by Chinese merchants and pioneering immigrants. The typical Chinese red walls and Buddhist décor can be seen here.

Uluwatu Temple: At the end of the day, we reach the Uluwatu temple or Sad Kahyangan Temple on the seashore. This is one of the 6 large temple complexes in Bali. The Kecak dances will mesmerize you with a grand finale to the day.

After a sumptuous breakfast, collect all your stuff and pack your bags. Our representative will drop you at the airport and bid adieu until we meet next time at another place for another holiday.