Bhutan is the must-visit travel destination as it presents the perfect potpourri of traditional culture and modern sensibility. The Best of Bhutan is a tour package that is meticulously designed to provide the best of the glimpses of Paro, Thimphu, and Punakha, in 6 days Bhutan Tour. The itinerary is excellently crafted to ensure a memorable trip for family vacationers, couples and groups. Further, the inclusions include a visit to various attractions such as Trashi Chhoe Dzong, National Library, Simtokha Dzong, Memorial Chorten, Textile Museum, Chimi Lhakhang (Fertility Temple), Drukgyel Ruin Dzong, National Museum of Paro, Rinpung Dzong, and more. 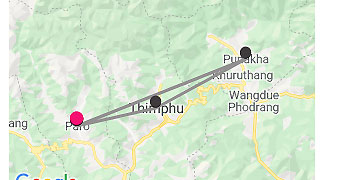 Upon your arrival at Paro Airport, get welcomed by our representatives. Thereafter, get assisted and transferred to the hotel in Thimphu. Check-in, freshen up and take a little rest. Thimphu, the capital city is popular for its richness in terms of history, culture, and economy. The capital city also represents the perfect mix of the new and old worlds. In the remaining hours of the day, visit these attractions:

Trashi Chhoe Dzong- This is the fortress of the glorious region which is located on the western coast of the River Wang Chhu. The popularity of the fortress is due to the enthronement ceremony of the 5th king of Bhutan held here. Moreover, the Tsechu festivities every year also add to the glory of the attraction.

National Library- Built-in 1967, the National Library conserves and promotes the religious beliefs and cultural heritage of Bhutan. There also is an extensive collection of valuable Buddhist manuscripts featured in the library. Additionally, the magnificent architecture of the four-storeyed building also charms the visitors.

The evening is to be spent at leisure. Thereafter, return to the hotel for dinner and an overnight stay in Thimphu.

On the 2nd day of the Bhutan itinerary of 6 days is dedicated to being spent in Thimphu and explore its attractions. After breakfast, get ready to visit these attractions:

Simtokha Dzong- Constructed by Zhabdrung Ngawang Namgyal in 1629, Simtokha Dzong is the oldest Dzong in Thimphu. This small Buddhist monastery is also acknowledged as an important landmark and historical monument in the capital city. Also, there is an Institute that focuses on language and Cultural Studies.

Memorial Chorten- Built in the memory of Jigme Dorji Wangchuck (the 3rd king of Bhutan), the Memorial Chorten is also known as Thimphu Chorten. Situated on the Doe boom Lam, the Chorten is one of the major attractions in the city capital. The white colored structure features golden spires and bells.

Textile Museum- 'National Textile Museum' is the proper name for the Bhutan Textile Museum. Thus, for a detailed introduction of the national weaving art of Bhutan, together with hand-woven textiles, local dresses, and different traditional weaving techniques, the museum is a must-visit attraction. Takin Mini Zoo- In this mini zoo, the visitors can spot the national animal of Bhutan, Takin. The endangered species is said to be the hybrid of a cow and a goat. Along with providing shelter, the mini zoo also protects the endangered species.

Thereafter, in the evening, return to the hotel for dinner and an overnight stay in Thimphu.

Post breakfast, get ready to reach Punakha. En route to Punakha, visit the Dochula View Point (45 min from Thimphu). Enjoy the panoramic views of the great Himalayan Range. Later, continue your journey towards left and moving down to the valley. Check-in to the hotel, freshen up and take a little rest. Thereafter, use the remaining hours of the day in exploring the attractions of Punakha:

Punakha Dzong- Pungtang Dechen Phodrang Dzong is popularly known as Punakha Dzong. When translated, it means 'Palace of Great Happiness'. The attraction is located at the meeting point of the Pho Chhu River and Mo Chhu River. In 1637-38, the Punakha Dzong was constructed by Zhabdrung (Shabdrung) Ngawang Namgyal. This is also acknowledged as the second oldest Dzong in Bhutan. The attraction is connected to the mainland via a wooden bridge.

Chimi Lhakhang (Fertility Temple) - The monastery or temple, situated on a round hilltop, was built by Ngawang Choegyel (14th Drukpa hierarchy) in 1499. The temple is believed to bless the childless woman. Thus, ladies visit this temple and get the blessing of Saint Lama Drukpa Kunley.

Later in the evening, return to the hotel for dinner and overnight stays in Punakha.

In the morning, after breakfast, drive to Paro. Upon your arrival, check-in, freshen up and take a little rest. Later, get ready to enjoy a sightseeing tour in Paro and visit attractions such as:

Drukgyel Ruin Dzong- Situated in the upper regions of the Paro Valley, this interesting ruined Dzong was formerly a Buddhist monastery and a fortress. Ordered by Shabdrung Ngawang Namgyal, this edifice was constructed by Tenzin Drukdra in 1649, in the memory of a victory over a Tibetan invasion. During the 1950s, a fire broke out, which led to the destruction of the fort.

Kyichu Lhakhang- The temple is popularly known as Kyichu Temple. This building was built by the Tibetan King Songtsen Gampo in 659. The temple is also said to be one of the 108 temples, which were constructed during the subduing of a demoness in the Himalayan region. Along with locals, the temple is also visited by revered saints such as Guru Rinpoche of the 8th century.

National Museum of Paro- Built-in 1968, the national museum of Paro is also known as a cultural museum. The museum was founded in a building, known as Ta-Dzong. Here, the visitors get to know about the massive collection of a varied specimen of Bhutanese paintings, statutes, art and much more.

Rinpung Dzong- This Drukpa Kagyu Buddhist monastery serves as a monastic home for a monk community and as a civil administrative center of Paro. This Dzong was built in 1644 by Shabdrung Ngawang Namgyal as the representation of a united Bhutan.

Later, return to the hotel for dinner and an overnight stay in Paro.

This day is dedicated to being enjoyed either through an excursion tour to Chele La Pass & Haa Valley or hike up the hill to visit the famous Tiger's nest temple. Later, in the evening, the guests can visit the local market of Paro.

Chele La Pass and Haa Valley- Situated at around 13000 ft. above, towards the western side of the Paro Valley, is Bhutan's highest pass that offers great views of the grand Himalayas, including the lovely Jomolhari Peak (23,966 ft.). It takes about one and a half hours drive from Paro Valley floor to reach the Chele La pass (12,402 ft.). The visitors get mesmerized with beautiful views of the surrounding. Thereafter, continue towards Haa Valley, which spreads over an area of 1706 sq. m. Indulge in a light walk and get yourself drenched into the cultural-rich ambiance of the place. Visit some of the attractions like White Temple, Demchok Dzong, Black Temple, and more.

Taktsang Monastery (Tiger's Nest Temple) - Built-in 1692, on a cliff, at proximity to Guru Padmasambhava meditation cave. Situated at an altitude of 1200 m above the sea level, the visitors can reach the attraction through horse ride, together with an up-hill hike of about 2 hours. After hiking of around 1 hour, the visitors can halt at a few small cafeterias for refreshments.

In the evening, return to the hotel for dinner and an overnight stay in Paro.

After having breakfast you will leave for Paro Airport for your homebound journey.