Yoga and Meditation Tour with Taj and Ganges

Myriad options are available for tourists who want to explore the bounties of India. The age-old tradition of Yoga is one such reward that has passed on from one generation to another over the course of history. Rishikesh, also known as Yoga capital of India and it is one of the best places to meditate due to its location in the foothills of serene Himalayas. On the other hand, Varanasi, also known as Kashi, is a great center to practice spirituality, Ayurveda and yoga. The city is not just famous for its Yoga ashrams but also for its ancient temples and serene Ghats which beckon pilgrims from all around the world. The Yoga and Meditation tour with Taj & Ganges has been customized to serve the better of these two aforementioned spiritual destinations on the platter of the guests along with an opportunity to marvel at the magnum-opus of Mughal architecture- Agra. 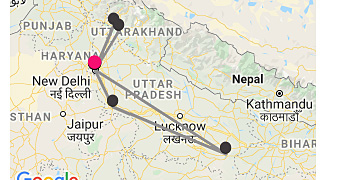 Upon arrival in Delhi, our tour representative will greet you and assist you in smooth transfer to your hotel. Being the national capital of India and having proximity to some popular tourist destinations in India, Delhi is thronged by domestic and international tourists throughout the year. The city is divided in two parts- Shahjahanabad or Old Delhi and Lutyens' Delhi or New Delhi. While Old Delhi still retains the Mughal aura in its heritage buildings, New Delhi, with its contemporary look and modern buildings which include malls, restaurants and museums, lives up to the charm of a metropolitan city.

Stay overnight at the hotel in Delhi.

The second day of the tour has been reserved for city tours. After a refreshing breakfast, set out to explore the diversity and mysticism of the capital with an experienced guide. First make a visit to Raj Ghat, the cremation site of Mahatma Gandhi. Afterwards, proceed towards the largest mosque in Asia, Jama Masjid while driving past the signature building of Delhi, Red Fort. Both Red Fort and Jama Masjid were built by Mughal emperor Shah Jahan in the 17th century AD and are now the UNESCO World Heritage Sites. Next to Red Fort and Jama Masjid is the busiest market in India, Chandni Chowk, which also has an interesting history to tell to its visitors. If you want, you can enjoy a rickshaw ride from Jama Masjid to the colorful streets of Chandni Chowk.

After Old Delhi, you will move towards New Delhi where we will drive past the President's House, Parliament and India Gate. We will also halt for a photo stop near India Gate. By afternoon, you will visit Humayun's Tomb and Qutub Minar. While the former is a famous mausoleum with a beautiful Mughal style garden, the latter is the tallest stone structure in India built by Qutb-ud-din Aibak. Later, we will also make a visit to the famous Laxmi Narayan temple before returning back to the hotel. It is also famous by the name of the Birla Mandir as it was built by the famous industrialist JK Birla. This temple is dedicated to the Lord Narayan and his consort Goddess Lakshmi.

Early morning, you'll be transferred to airport to board flight to Dehradun. On arrival in Dehradun, leave on road for the Ananda Resort which is at a distance of about 40 kms. Post lunch you can, embark on a sightseeing tour of Rishikesh which includes a visit to Bharat Mandir, Triveni Ghat, Ram Jhula, Lakshmana Jhula, Parmarth Ashram and Sivananda Ashram. Nestled in the foothills of Himalayas and abounded by several temples and ashrams, Rishikesh is known as the 'Abode of Gods'. The place is an oasis for a large number of visitors seeking peace and spirituality. Rishikesh also serves as the gateway to popular Char Dham pilgrimage. The city holds a great mythological significance for its association with the Lord Rama. Legend says that Lord Rama did a huge penance here in Rishikesh before leaving for War against Ravana. The famous Lakshman Jhula situated in Rishikesh is named after the younger brother of Lord Rama, Lakshman who is believed to have built a jute rope bridge for crossing the holy river Ganga. Behold the mesmerizing sight of Ganga Aarti at Triveni Ghat.

Late evening drive back for overnight stay in Ananda Resort.

One of the most popular spa destinations in India, Ananda Resort and Spa offers a rejuvenating experience along with world class facilities and immense comfort. During the day, partake in yoga classes and benefit from this science of meditation.

Away from the hustle and bustle of the city, Ananda is a place where you can relax and unwind. Your stay at Ananda will not only help you de-stress, but will offer you much more. At Ananda, you will get an opportunity to calm your mind, body and soul. Yoga classes are organized at the resort headed by an experienced yoga instructor. You get to experience Yoga in its pure and traditional form.

Choose from the extensive list of body and beauty treatments from the Ananda Spa. The spa experience at Ananda is spectacular and it makes an individual attain mental and physical harmony. Therapies from Ayurveda, European and Oriental systems are offered by a team of qualified experts.

The food offered to you at the resort is prepared after following the key principles of Ayurveda. So, the food not only helps you in losing weight but also takes you towards a healthier life.

Today you will take a flight back to Delhi from Dehradun Airport. On arrival in Delhi, you'll be transferred to your hotel. Evening free for shopping, or any other activities of your choice. You can stroll around the local markets and savor the delicious street food.

Early morning, hit the road to Agra which is about 215 kilometers from Delhi and takes around 5 hours to reach. Agra is a fine repository of Mughal art and architecture with various monuments dotting the length and breadth of the city. The most landmark monument of Mughal architecture 'Taj Mahal' is situated in Agra itself. The white marble monument was built by Mughal Emperor Shah Jahan in the memory of his beloved wife Mumtaz Mahal who died after giving birth to her 14th child.

On arrival, check into your hotel and the rest of the day is at your leisure. One can explore the vibrant markets of the Agra and buy some souvenirs for their loved ones. Agra is famous for its marble work and leather accessories.

Later in the evening, return to the hotel and have a dinner. Overnight stay at the hotel in Agra.

Early morning, leave the hotel to savor the morning views of Taj Mahal. The moment the first rays of the sun hit the dome of Taj Mahal, it appears like a shining heavenly abode cloaked in a golden hue. In the afternoon, explore the length and breadth of the Agra Fort- the erstwhile seat of Mughal emperors - followed by Id-Mat-Ud-Daulah tomb built by Empress Noor Jahan to commemorate Mirza Ghiyas ud-din Beg.

Overnight stay in the hotel in Agra.

After breakfast you will be transferred to airport to board a flight for holy city of Varanasi. On arrival in Varanasi, you'll be escorted to the hotel by our tour representative.

One of the earliest inhabited cities of the world, Varanasi is often termed as the spiritual nerve center of Hinduism. On one of his tours to India, Mark Twain said "Banaras is older than history, older than tradition, older even than legend and looks twice as old as all of them put together". It is believed that one who dies in Varanasi gets relieved from the cycle of birth and re-birth. One of the most breathtaking sites in Varanasi is the Ganga Aarti at Dashashwamedh Ghat. The Aarti is performed in the reverence of holy river Ganges which is said to have the powers to wash away the sins of lifetime.

Once you have reached your hotel, proceed for check-in and later embark on a city excursion to Sarnath. The town is famous because Lord Buddha preached his first sermon after attaining enlightenment. The city tour will cover attractions like Dhamek Stupa, Chaukhandi Stupa, Buddha Temples and Archaeological Museum.

In the afternoon, embark on a sightseeing tour of Varanasi which includes Dashashwamedh Ghat, Bharat Mata Temple and Alamgir Mosque.

In the evening, enjoy the breathtaking views of Ganga aarti and delve into the spiritual vibes of this majestic city.

Stay overnight at the hotel in Varanasi.

For rest of the day, partake in yoga classes. There are various traditional and institutional yoga centers at Varanasi where the age-old tradition of yoga learning is still alive. You can choose to rejuvenate yourself with Ayurvedic Massages.

Later, return to the hotel after the yoga sessions and have a delicious dinner. Overnight stay at the hotel in Varanasi.

Spend time in leisure in the morning. In the afternoon, you'll be transferred to the airport to board flight to Delhi.

On arrival in Delhi, you'll be escorted to the international airport to board flight back home.