Situated in the lap of nature, Haridwar and Rishikesh are the two places where one can practice Yoga and Meditation easily. Both of these towns also dotted with many ancient temples and ashram that are perfect for seeking peace and enlightenment. Yoga and Meditation Tour is the perfect way to soothe your body, mind, and soul. The experienced instructors of Yoga and Meditation will provide you a brief knowledge about how to relax your mind as well as body through various breathing techniques and yoga postures.

The 11 Nights / 12 Days Yoga and Meditation Tourpackage offer life-changing experience and allow you to achieve spiritual peace. Additionally, Yoga and Meditation Retreat holiday package takes you to various enchanting locations like Delhi, Haridwar, Rishikesh, and Shivpuri. Your tour commences from Delhi which showcases a mélange of the ancient past of India and the vibrant aspect of the modern world. The wonderful sojourn continues to two serene towns. Rishikesh and Shivpuri have become prominent centers for yoga and meditation. Rishikesh is well-known as the ‘World Capital of Yoga’ whereas Shivpuri is popular for camping. Here, you will also indulge in various exciting activities such as river rafting, trekking, wildlife safari, jungle walk and many more. Hence, planning a Yoga vacation India provides you the best opportunity to experience the magic of yoga, reduces the stress of your life, gives you a healthier body as well as the mind, and helps you discover a new you. 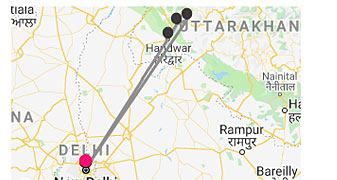 In the late evening, you will reach Delhi. Then, you will be welcomed by our tour representative who helps you to get transferred to your pre-booked hotel. Complete your check-in formalities and get over tiredness. Delhi, the capital city of India is enriched with enchanting architectural styles, cultures and human diversity.

Kick start your day with a hearty breakfast and get ready to explore the prime attractions in Delhi. Firstly, you will pay a visit to Parliament House, also called Sansad Bhavan. It is one of the remarkable buildings in Delhi. It accommodates the "Lok Sabha" as well as the "Rajya Sabha" of Parliament and a library. This building contains delightful gardens and fountains which enhance the glory of the Parliament House.

Next, seek the blessings of almighty by visiting the Laxmi Narayan Temple which is dedicated to Lord Vishnu and his consort Goddess Laxmi. Painted in yellow, red and white, the 3-story temple was built in the 1990s and is also called as the Birla Mandir. It includes various shrines, fountains, a huge garden, and the outside interior is covered with carvings portraying scenes from the Hindu mythology.

Afterward, see the India Gate, also known as the "All India War Memorial". The imposing structure is an awe-inspiring sight and counted as one of the largest war memorials in India. This memorial is dedicated to Indian and British soldiers who died during the First World War and the Third Anglo-Afghan War.

In the afternoon, you will be exploring the charming Old Delhi. Here, you will go to Gandhi Memorial, a black-colored built on the place where Mahatma Gandhi was cremated. It is also known as Raj Ghat and is surrounded by a beautiful lush garden. Tourists visit the place to pay homage to the Father of the Nation.

Later on, worship at the Jama Masjid which is the largest mosque in the country. The massive central dome of the masjid is an outstanding example of Islamic architectural styles. The courtyard of this mosque can accommodate 25,000 devotees at the same time.

Now, set your foot into the Red Fort. Considered as a historical fortification, it was constructed by Mughal Emperor Shah Jahan. This historical architecture derives its name from its impregnable red sandstone walls. This fort represents the architectural brilliance and creativity of Mughal artisans. Today, it is home to numerous museums that have put an assortment of precious artifacts on display.

In the evening, proceed to attend the Light and Sound Show. It is an informative, quick and interesting way to know about the history of Delhi. The show displays the journey from the Mughal Era to the British period to current day Delhi. Visitors will enjoy the unforgettable experience of the history of Delhi as well as the mighty Mughal Empire

Later, come back to your hotel and stay overnight.

Early in the morning, our tour agent will drop you at Delhi railway station where you will catch the train to Haridwar. From there, you will continue your journey to Rishikesh by road. Rishikesh is situated at the confluence of the Ganga and Chandrabhaga River. Thousands of tourists visit this holy site due to its religious aspect and practicing yoga and meditation. It is also the perfect place for adventure seekers because it allows trekking expeditions to the Himalayan peaks as well as rafting on the Ganga River.

In the afternoon, you will reach there and head out to explore the Rishikesh Yoga Ashrams that are internationally recognized as the Center of Yoga and Meditation as well as Philosophical studies. Some famous ashrams in Rishikesh are:

Swarg Ashram Parmarth Niketan is one of the true spiritual havens. This ashram is situated on the holy banks of the Ganga River in the lap of the Himalayas. Ved Niketan Yoga Study Center is one of the oldest ashrams in Rishikesh. The sole purpose of this Yoga Center is to spread spirituality and yoga teachings all over the world. Muni Ki Reti Mahesh Yogi Ashram is considered as the International Academy of Meditation and is located in the foothills of the Himalayas.

Afterward, check-in at the pre-decided ashram for your stay. Thereafter, you will get a brief description of the daily schedule accordingly.

According to the Yoga Retreat Rishikesh tour, you will spend the next three days in one of the above-mentioned ashrams which follow a typical day schedule as mentioned below:

7:00 AM to 8:00 AM – Yoga Classes. These sessions allow a systematic practice of physical exercise, relaxation, breath-control, positive thinking, and diet control, etc. that are required to develop the harmony in your mind, body, and environment.

Get up early in the morning and start your drive towards Shivpuri. It is a camping place which is preferred by the nature lovers who want to spend their enjoyable time amidst pristine surroundings of this place. Upon arrival, get accommodated at the resort and the concerned authorities will offer you the welcome drink. Rest for a while and then get a brief introduction of your Yoga Retreat India tour in Shivpuri. Later, you can also enjoy the jungle walk in and around the area. During the day time, you can admire the scenic views of this region. An enjoyable bonfire in the evening will transform your night into a memorable affair. Savor your dinner and enjoy a peaceful sleep to listening to the soothing sound of water that is gushing down the hills.

Overnight stay at the camp resort.

In the morning, you will wake up to the melodic chirping of the birds. Brace yourself for the yoga class early in the morning. This is followed by relaxing your body as well as mind. After that, have your yogic breakfast and leave to Byasi / Kaudiyala to start your river rafting activity at Shivpuri. Rafting at Kaudiyala region is especially for the tough rangers who love highly adventurous expedition. This place is blessed with beautiful foothills and landscapes. It is the finest location that covers the major rapids of the Ganga River and gives an exhilarating experience to the rafters.

After that, munch your lunch at the camp resort. Later, the evening is planned for meditation and relaxation. At night, enjoy the bonfire and savor your dinner.

Your delightful day ends with a night of restful sleep at the camp resort.

Early in the morning, you will leave for Hindolakhal and this journey will take one and half hour. As you reach there, start the trekking towards Kunjapuri. It is perched at an elevation of 1645 meter above the sea level. This site lends a panoramic sight of the Himalayan peaks to the North and Haridwar, and Rishikesh and the Doon Valley to the south. This place is covered by mesmerizing mountains and thick forest.

Upon reaching Kunjapuri, join your class for relaxation, meditation, and performing asanas. Cherish the stunning views of the Greater Himalayan peaks and further proceed to your camp resort at Shivpuri.

In the afternoon, have your delectable lunch and get ready for wildlife safari at Chilla. This park is also known as the Rajaji National Park and is mainly popular as the Asian Elephant Reserve. A jungle safari is already organized for you where you will get the chance of viewing sambar, spotted deer, tiger, wild boar, barking deer, leopard, and much more. During your safari, you will cross undulating forest track, lush green valleys, dense forests, hilly terrain, sprawling grasslands, stream, and so on.

In the evening, come back to your camp resort. Have your scrumptious dinner and spend the overnight there.

Wake up early in the morning and go for your advanced yoga class. Then, attend the question-answer session round that inculcates the changes in your personality during Yoga and Meditation course. After that, treat your taste buds to a wholesome breakfast and once again start your river rafting journey from Shivpuri to Rishikesh. As you reach Brahampuri, munch your lunch. Later, you will be escorted to Haridwar railway station to board your train to Delhi.

Upon arrival at Delhi, complete the check-in process and retire in your hotel's room for an overnight stay.

In the morning, our tour agent will drop you at Delhi International Airport to catch a flight to your onward destination. Hope you enjoyed your Yoga Holidays India.