Uttarakhand or ‘Dev Bhoomi’ as it is fondly known as a land of various ancient shrines and other holy destinations. It is a place where one can find pilgrimage sites, splendid hill stations, lofty mountains covered in snow, crystal clear waters and terrains embellished with green carpets altogether. Delightful Uttarakhand Tour offers the right opportunity to bask in the bliss to those who want to have a break from the maddening crowd and pollution of city life.

With 7 Nights / 8 Days Uttarakhand Tour Itinerary, begin your sojourn from Delhi and proceeds towards Rishikesh. The holy town is one of the most popular pilgrimage centers in India.The trip further takes you to Lansdowne, a scenic hill town which was found as a military garrison under the British Raj. You also get a chance to spice up your holidays by exploring the wilderness of the Jim Corbett National Park, a popular wildlife sanctuary in India. The panoramic views of the Himalayan peaks and the scenic splendor of Kausani make your trip special.

A drive to Binsar Wildlife Sanctuary which is situated on the top of the Jhandi Dhar hills in the Himalayas will offer a memorable experience. The trip ends at a beautiful destination which is Nainital which is a beautiful gem in the crown of Uttarakhand. A honeymooner’s paradise, the hill station is famous for its misty lakes and imposing mountains. In addition, some of the other best places to see in Uttarakhand will cast a spell on you.All in all, from pilgrims to avid travelers and from nature lovers to newly wedded couples, Uttarakhand welcomes all. 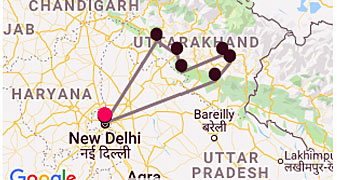 Upon arrival in Delhi, our tour representative will greet you and transfer you to your desired destination i.e., Rishikesh. The destination is 250 km far away from Delhi and it will take around 6 hrs to reach there. The holy town is famous for its ancient ties with Hindu culture. This city has also been always heaven for adventure seekers and allows you to indulge in various adventurous activities like bungee jumping, rafting, trekking, kayaking, etc. It is the gateway for tourists coming to visit several holy shrines, flower-strewn meadows, valleys, rivers, and mist-covered trails of the Himalayan region. Embarking on countless mountain treks is another wonderful option here.

As you reach Rishikesh, register yourself at the hotel reception and get over tiredness. In the evening, you will go for sightseeing of famous attractions here. the day trip starts from Laxman Jhula, a hanging bridge across the River Ganga. It is extremely well-known amongst travelers due to its rich mythological associations. It is believed that Lord Rama and Lord Laksham had crossed the River Gange from this same site where the bridge now majestically stands for all to see. Next, move to the Bharat Mandir which was built by Adi Guru Shankaracharya. It is dedicated to Lord Vishnu who resides here in the form of a Saligram. This shrine is popular for old statues, coins, pots and numerous artifacts that are housed inside.

Thereafter, go to Triveni Ghat which is the meeting point of three sacred rivers Ganga, Yamuna, and Saraswati. According to the beliefs, pilgrims visit this place to take a holy dip in it to wash away all their sins and purify their soul. The evening aarti is performed at this ghat and is also known as the "Maha Aarti". At last, see Trayambakeshwar Temple which is a thirteen story shrine dedicated to Lord Shiva. This temple enshrines idol of all Hindu god and goddesses. Marvel at the emerald water of Ganges that looks calm when watched from the topmost floor of the temple.

Later, return to the hotel for an overnight stay.

Munch your breakfast in the morning and then start your drive towards Lansdowne by road. It is one of the quiet and less-crowded hill stations of India perched at an altitude 1706 m above sea level. The place is surrounded with thick oak and blue pine forests. It has many old buildings flaunting British colonial architectural styles. Witness panoramic views of feathered birds, undulating verdant hills, salubrious and serene climate, lush greenery and much more.

Upon arrival, complete the check-in process at your pre-booked lodge. Quickly freshen up as you will paying a visit to the major attraction points of Lansdowne in a short while. Visit the War Museum, also called the Darwan Singh Sangrahalaya. It was established by Lord Rawlinson of Trent who was Commander in Chief, India in 1923. From this place, tourists can come to know more about the history of the Indian Army. After that, see 'Tip n Top' hill point, also commonly known as Tiffin Top. It is the highest point in the entire Lansdowne from where you can capture magnificent and breathtaking views. Now, go to St. Mary's Church which was built in 1896. It was closed after 1947 and later converted into a museum by the Garhwal Rifles Regimental Centre. It is a beautiful structure showcasing Victorian architectural style and contains a picture gallery. A short 10 minute documentary on the history of Lansdowne is played by Garhwal Rifles here.

Thereafter, see the splendid view of Chaukhamba and Trishul mountain ranges from Tiffin Top and Snow View Point. The Snow View Point is also known as the Sunset Point that offers the most charismatic view of the sunset in the Uttarakhand. In the evening, you will pay homage at the Tarkeshwar Mahadev Temple which is a holy place of deep faith and is dedicated to Lord Shiva. This place is surrounded by a tranquil atmosphere and Deodar trees. Also, it is the best meditation place for sages. It is believed that Lord Shiva still dwells here and is in deep sleep.

After a wonderful Lansdowne tour, return to your lodge for a sound sleep.

After reaching there, complete the check-in formalities at the wildlife resort. Take some rest and enjoy your lunch at the jungle resort. The evening is at leisure. You can visit Garjiya Devi Temple which is dedicated to the Goddess Parvati. This temple is the home to deities including Lord Shiva, Baba Bhairon, Goddess Saraswati, and Lord Ganesha. On Karthik Poornima, a huge fair is conducted in this temple.

You can also go for jungle Safari to see the exclusive landscape, unique environment, pleasant ambiance, beautiful flora and fauna, endangered animals, and much more.

Relax for the overnight at your wildlife resort.

After having scrumptious breakfast, you will move to Kausani by road. Kausani is adorned with a lush green valley, meandering creeks, verdant pine tree forests, majestic Himalayan peaks and tranquility. So, it is one of the most spellbinding hill stations in Uttarakhand. It is also called the "Switzerland of India".

As you reach Kausani, get accommodated to the hotel after completing check-in formalities. Relax and rejuvenate yourself for some time. Thereafter, go to Kausani Tea Estate, the only place in India that produces organic orthodox tea. You can also witness the entire process of tea manufacturing with an experienced guide. Tourists feel very close to nature here. The place is a paradise for tea lovers. Next, proceed to Sumitranandan Pant Gallery dedicated to the Hindi poet Sumitranandan Pant. This museum has the collections of the manuscripts of his poems, articles, received awards, written letters and draft copies of his literary works. This museum has become an interesting place for literature lovers.

After that, visit Anasakti Ashram, also known as Gandhi Ashram where Mahatma Gandhi wrote his Anasakti (Detachment) Yoga – Gita – Anashakthi Yoga. This place also contains photographs and books based on Mahatma Gandhi's life. It also has a small prayer room where prayers are held in the morning as well as in the evening. Then, see Lakshmi Ashram which is lovingly referred to as Sarla Ashram. This place exudes a tranquil aura. There is also the boarding school run by the ashram and there is also an eminent center for rural women. Call it a day with an excursion to the Rudradhari Falls and Caves. The green terraced hillside is covered with pine forest and paddy fields. The Rudradhari falls adorning the valley flows like rivers and small springs. When here, don't forget to unveil the mysteries of the ancient caves.

At the end of the day, take your dinner and retire for the night in your lodge.

You will spend the 5th day of your Tour of Uttarakhand in Binsar Wildlife Sanctuary. Upon arrival, complete the check-in process at the hill resort. Binsar Wildlife Sanctuary has been declared as an "Important Bird Area" by BirdLife International. It is home to more than 200 species of exotic varieties of native and migratory birds. You will also see rare varieties such as Blackbirds, Forktail, Kalij Pheasant, Monal, Laughing Thrush and many more. Binsar is also known for offering the amazing views of the snow-capped Himalayan peaks.

Later, return to the hill resort for having your lunch. The rest of the day is at leisure. At night, savor your dinner and soak in the comforts of your resort's room.

In the morning, savor a delectable breakfast and check out from the resort. Then, you will drive straight to Nainital. This beautiful hill station is situated at the green foothills of the Kumaon ranges in the Himalayas. It brims with elegant colonial structures that enhance the beauty of this place.

After reaching Nainital, check-in to the lodge. Settle yourself and start the half-day city tour of Nainital. Firstly, seek the blessings at Naina Devi Temple, a well-known shrine which is revered as one of 51 Shakti Peeths of the Goddess. The Goddess Naini Devi is represented by her two eyes in this holy shrine. As per mythology, the eyes of the Goddess Sati fell here when her corpse was being carried by Lord Shiva. This is followed by a trip to St. John Church which is one of the earliest buildings erected in Nainital. It is dedicated to John the Baptist and is a calm and serene place that offers a spiritual retreat to the tourists.

Later, come back to the hotel and unwind yourself for the night.

In the morning, you will go for sightseeing of top tourist attractions in Nainital. The trip will start from Naini Lake, which is a kidney or crescent-shaped lake. It is a beautiful natural freshwater lake and is bounded by Naini Peak, Tiffin Point, and snow-capped peaks. At early morning and sunset, it offers breathtaking views and awestruck the visitors with mesmerizing scenic beauty. Then, move towards the Governor's House, also called the Raj Bhawan of Nainital. It is the official accommodation of Governor of Uttarakhand. It consists of Golf Links, marvelous gardens, Jhandidhar Modi Heights, Swimming Pool, Munshi heights, etc.

Your next destination is Snow View Point which stands at a dizzying altitude 2270 m above sea level. It offers the panoramic views of the mighty Himalayas draped in a blanket of milky-white snow. You can also see the picturesque views of Nanda Devi, Nanda Kot, and Trishul peaks from this point. In the evening, go to the Mall Road which runs parallel to the Naini Lake. It is the prime spot for luscious food, shopping places, showrooms, cafes, hotels, cultural centers, etc.

It is the last day of your Uttarakhand Trip Package. Get ready to leave towards International Airport, Delhi. After reaching there, board your flight for your onward destination.