Best of Kerala with Treehouse Stay

A Kerala tour is the golden ticket to get closer to nature for all the travelers. This is because the state is dotted with palm-lined beaches, calm surroundings, extensive coastline, salubrious climate, azure backwaters, verdant scenery, etc. Another famous aspect of Kerala is its alluring treehouses. The best of Kerala with Treehouse stay tour provides serene, luxurious and blissful experience along with comfortable accommodation amidst nature.

Standing out amongst the rest of Kerala Tour Packages for 7 Days, this well-planned itinerary lets you explore popular places like Cochin, Munnar, Alleppey, Kovalam and Trivandrum. Start your enchanting trip from Cochin whichis called as the ‘Queen of the Arabian Sea’ and renowned for its colonial heritage as well as is a hub for Keralan arts. Now, move towards mesmerizing surroundings of Munnarwhere tourists love to treat their eyes to charming views of green tea plantations, Cardamom hills, as well as breathtaking views of the craggy peaks and enchanting waterfalls. The itinerary also includes a trip to Alleppey. Here, you will feel the warm coastal breeze as you cruise along the backwaters of Alleppey. Also, spend some time at the relaxing beach expanse in Kovalam forms the major highlight of your holiday package. It also offers the enchanting view of the endless sight of coconut trees. Undoubtedly, Kerala has several allures for visitors such as architectural delights, breathtaking hill stations, pristine beaches, luxury houseboats, peaceful backwaters, exotic wildlife and much more. Explore them all with this exclusively crafted tour. 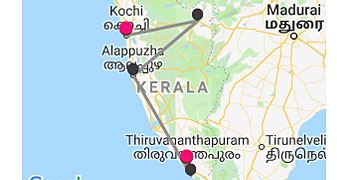 Upon arrival at the Cochin Airport / Railway Station, you will be greeted by our tour representative who will help you with a guided transfer to the pre-decided hotel. Register yourself at the hotel reception and unwind yourself. Cochin is a bustling commercial city along with a trading history of at least 600 years. This city is marked by influences of Dutch, Arabs, Portuguese, Phoenicians, British, and Chinese, etc.

After relishing your lunch at the hotel, get ready to explore the major hotspots in Cochin City. Start with Cochin Harbor.

Then, go to Fort Cochin which is a seaside town and well-known for its old-world colonial charm. Here, you will see how Dutch or Portuguese colonialism affected this part of our country. This place is dotted with European structures, churches, and other architectural buildings which take you back to a bygone era. Travelers get awestruck by the picturesque views of the beach, serene surroundings, and the unique structures.

Your next destination is St. Francis Church, well-known for its delightful structural design and ambiance. Here, Vasco-da-Gama, the famous explorer was originally buried. This church shows the deep influences of Portuguese and Dutch and also is an architectural marvel in itself.

Now, visit the glorious monument Dutch Palace, also called as the Mattancherry Palace. This palace depicts the finest Kerala architectural style with colonial influences and was built-in around 1545 C.E. It has a huge collection of mural paintings, sheathed swords, life-size portraits of the kings of Cochin, axes, daggers, royal caps, and coins.

Afterward, you will be visiting Jewish Synagogue which is also known as Mattancherry Synagogue or Paradesi Synagogue. In 1567, it was constructed and is counted as one of the seven synagogues of the Yehudan Mappila or Malabar Yehudan. This place has rare antiques including clock towers, striking architecture, Chinese hand-painted tiles, charming chandeliers and much more.

By the end of the day, you will attend wonderful Kathakali Dance performance which is an iconic classical dance form. The artists of Kathakali draw the attention of people with their charming costumes, the elaborate make-up, and intricate movements of hands, body, face, and eyes. This vibrant art form tells the stories from the Indian Epics with a blend of dance, acting, and music.

Later, come back to your pre-decided hotel for a soothing sleep in your room.

After a lavish breakfast, you will leave for Munnar by road. It is perched at an elevation of 1600 meter above the sea level. Munnar was the summer resort of the erstwhile British Government in South India. It is the most prominent hill station of South India and is popular for its verdant tea estates and stunning viewpoints. This pristine hill station is blessed with enchanting valleys, unending expansion of tea plantations, sumptuous green rain forests, charming mountains, crystal-clear streams, and exotic species of flora and fauna, and much more.

After reaching there, you will enjoy your stay in a Treehouse in Munnar. Complete your check-in formalities at TreeHouse Munnar and the rest of the day is at your leisure. A treehouse Resort is a picture-perfect vacationer spot for tourists who are looking for a pacific outing tour amidst soothing atmosphere. These treehouses are the wooden houses that are built on top of the trees. Treehouses are constructed by using eco-friendly materials like bamboo poles, coir mats, live trees (as pillars), hay straws and many more. In Kerala, a treehouse is locally called as "Erumadam". The treehouses are designed exclusively and come equipped with all the modern amenities and attached bathrooms as well as balconies looking at the mountains.

Stay overnight at a treehouse.

On day 3 of the best of Kerala with a treehouse stay, savor a hearty breakfast and embark on a sightseeing tour of Munnar. Start from Mattupetty Dam which is located amidst the Munnar Hills near the Anamudi Peak. Calm surroundings, green valleys and pleasant ambiance attract more tourists. You can take the ride on paddleboats, motorboats, and rowboats. Unarguably, it is the perfect relaxation place for all adventure enthusiasts and nature lovers.

Next, visit Old Munnar Town that is a suitable place for the people who are looking for something different here. It has many charming palaces such as Top Station, Viewing Point, Land of terrace farms, Sights of Vattavada, etc. that present an exceptional visual retreat to the tourists. Top Station is the gateway to Old Munnar where the British pulled a long iron rope from the Kurangani Hill. Also, visit the Town Market of Munnar. Here, you can buy local spices, tea, handicrafts, and much more.

Now, get ready for an excursion to the Eravikulam National Park which is famous for its endangered inhabitant, the Nilgiri Tahr. It is home to numerous species including rare butterflies, birds and, animals. Also, visitors get to see the magnificent view of the tea plantations from here. This park is considered as a UNESCO World Heritage Site and is also known as the Rajamalai Wildlife Sanctuary. In addition, the Anamudi Peak stands majestically in the central area of this national park and is the highest peak of South India. The slopes of this peak are covered with blue flowers known as Neelakurinji which blooms once in every 12 years.

In the evening, enjoy your treehouse stay in Munnar.

Enjoy a refreshing breakfast at the hotel and then move on towards your next destination – Alleppey. It is an enchanting town of South India and is also called as Allapuzha. This place is a haven for nature lovers. Serene backwaters and the soul-soothing greenery add to the charm if the place. This place is blessed with a unique crisscrossing network of canals that run throughout the town and allow you to access the entire area while you are relaxing on your houseboat.

After reaching there, you will check-into a Kettuvallam, a traditional houseboat. Houseboats are man-made houses gliding on the river and offering an amazing experience to the tourists. Alleppey is commonly known as the 'Venice of the East' because of its brackish lagoons and interconnected lakes. Needless to say that on the houseboats, you will enjoy the scenic beauty of the river, mesmerizing natural beauty, swaying coconut palms trees, stunning views of the endless paddy fields, Chinese Fishing Nets and so on.

Stay overnight on your pre-allotted houseboat for a good night's sleep.

On the 5th day of your best of Kerala with treehouse stay tour, having a delectable morning meal and check-out from the houseboat to proceed to Kovalam by road. As you reach Kovalam, get accommodated at the beach resort and settle down. Kovalam town is renowned for its three adjacent crescent beaches namely Hawa Beach, Lighthouse Beach and Samudra Beach.

Hawa Beach is popular for its enchanting sunset views. It is also called as the 'Eve's Beach'. On the other hand, Lighthouse Beach is popular for its 35-meter tall Vizhinjam Lighthouse which is situated on the top of the Kurumkal hillock. Visitors love to click candid photographs from the top of this tall structure. Samudra Beach is the place where you will see some wooden fishing vessels and also watch local fisherman practicing their trade. Delight in squashy waves which quietly hasten against the hard rocks.

At last, your beautiful day ends with a restful snooze at the beach resort.

Start your day with a delicious breakfast and get ready to explore the local sightseeing tour in and around Kovalam. Seek the blessings of the lord at Padmanabhaswamy Temple which is dedicated to Lord Vishnu. This temple is counted as one of 108 holy abodes of Lord Vishnu. The name of the temple translates into 'God with a lotus in his naval'. The architectural style of this temple is a typical amalgam of Kerala and Dravidian style and showcases a sublime artistic character.

Now, set your foot into Veli Tourist Village which is located along the mouth of the River Veli and is a famous picnic spot. This village offers numerous indulging activities such as pedal boating, speedboating, horse riding, etc. Children can play until their hearts' content in the Children's Park. Moreover, one can spot swans, fishes, pigeons, birds, and tortoises on the banks of Veli River One can find a floating café and a walkway that is adorned with grass and stone sculptures within the premises here.

Thereafter, visit the Museum Complex which is situated on the northern side of the city and is also called as Palayam. This complex is a huge garden comprising of Sree Chitra Art Gallery, Napier Museum, Sree Chithra Enclave, Natural History Museum, and the KCS Panicker Gallery. The Museum Complex is well-known to have restored many historic artifacts as well as selective paintings.

Shankumugham Beach is well-known for the amusing sunsets, gushing waves, pristine waters, and splendid beauty. It is a quaint location with the beautiful white sand and scenic atmosphere that allures visitors.

At last, come back to the Kovalam and retire in your hotel room to catch up with a night of peaceful sleep.

In the morning, enjoy a Southern specialty as your morning meal. Thereafter, pack all your belongings and check out from the hotel. Our tour representative will smoothly drop you at the Trivandrum Airport/ Railway Station to proceed for your onward journey.