Rajasthan is a unique jewel in the crown of India flaunting its magnificent forts, royal palaces, attractive temples, national parks, villages, and the stark Thar Desert. Experience the magic of the lively state with the magnificent Rajasthan tour. Explore the rich heritage, flamboyant culture, admirable sand-dunes, remarkable variety of lush forests and varied wildlife. The well-planned tour of 6 days and 5 nights includes exhilarating desert safaris in Jaisalmer. The itinerary also offers a tour of Jodhpur well-known for its blue buildings. Besides, Bikaner is another delightful retreat in the desert stretch of Rajasthan which is also covered during your trip. You will develop a kind of romantic vision of the ‘Pink City’ – Jaipur once you travel to the city with us. For detailed information, read the details given below. 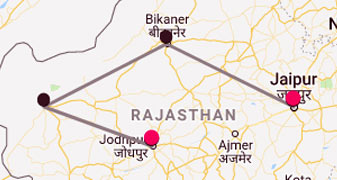 As you arrive in Jodhpur, complete the check-in formalities at the hotel. The Rajasthan tour begins with Jodhpur, which is located in the Thar Desert of the northwestern state of Rajasthan. Jodhpur is one of the well-known cities in the royal state. Majority of the houses here are painted in blue color and hence the city is known as the 'Blue City'.

The sightseeing starts with the prominent Mehrangarh Fort. Counted as one of the largest forts in Rajasthan, the architectural wonder dominates the skyline of the city. The vast fort is perched upon a hill at 400 ft and is spread across a distance of 5 km in the heart of the city. If you want to explore the history and culture of the city, then Mehrangarh Fort is the ideal spot.

Later on, you will visit another prominent landmark of the city "the Jaswant Thada". It is just at a walking distance from the Mehrangarh Fort. The cenotaph is Rajasthan's very own white marble mausoleum. Built in the memory of Maharaja Jaswant Singh II, it is commonly called as the Taj Mahal of Mewar.

Later you can shop at the ever-popular local markets of Jodhpur. The Sardar Market is a busy city marketplace with eateries, craft vendors, apparels & an iconic clock tower. As you explore the local markets, the amazing art & craft will give you a sense of the city's true spirit.

Later, head back to the hotel and stay overnight.

Day 2 : Jodhpur to Jaisalmer by Road

After the breakfast check out from the hotel and leave for Jaisalmer. Also known as the 'Golden City', Jaisalmer is named after its founder Maharana Jaisal Singh. The town located in the heart of the Great Indian Thar Desert is positioned on a ridge of yellow sandstone. There a number of Havelis, which were constructed by the royal merchants of the city. Upon arrival in Jaisalmer, check into the hotel. Then relax for the rest of the day.

Stay overnight in the hotel.

After breakfast, leave for the sightseeing tour of Jaisalmer city. A well-planned Rajasthan trip is incomplete without exploring this spellbinding city. Visit the famous Jaisalmer Fort, also known as Sonar Quila. The fort stands as a crown on top of the city. The fort is adorned with numerous shops, ornate Jain temples and castles clad in golden yellow sandstone. Today, you will also visit the Raj Mahal (royal palace) within the fort, the Laxmi Nath Temple and 7 other Jain temples. The palace museum consists of a vast collection of the artifacts from the royal era.

Other attractions that are included in today's outing are the Patwon-ki-Haveli – an astounding cluster of five different havelis and Gadsisar Lake - built by Maharawal Gadsi in the 14th century to conserve the rainwater.

Later in the evening, you will visit the Sam Sand Dunes. Hailed as the most authentic desert dune site in entire India, these sand dunes are located 45 km away from the city. Enjoy the camel ride to the Sunset Point, which will be a memorable experience.

After this return to the hotel and stay overnight.

Day 4 : Jaisalmer to Bikaner by Road

After breakfast, check out of the hotel and leave for Bikaner. A vast stretch of the gleaming desert, the city is situated in the northern part of the state. Famous for Camel Safaris the city was founded by the Rathore Prince- Rao Bikaji in 1488 AD. The world's largest camel research center and breeding farm are also in this city.

After you reach Bikaner, visit the Junagarh Fort. The massive fort was built by Raja Rai Singh (the sixth ruler of the city) in 1593 AD. Inside the fort, there is Anup Mahal, Ganga Niwas and the Rang Mahal. The fort depicts the architectural style which is influenced by the cultural differences of the rulers.

Up next is the visit to the Laxmi Niwas Palace, which was once the residence of Maharaja Ganga Singh. It is a brilliant example of the Indo-Saracenic style of architecture and now serves as a luxury hotel.

From there, visit the National Research Center riding a camel. It is spread across an area of more than 2000 acres and is one of its kind in Asia. As you spend your time there, you can enhance your knowledge about the camel, also known as the 'Ship of the Desert'. The National Research Centre houses a camel museum as well, it gives an insight into the development of the research work.

Day 5 : Bikaner to Jaipur by Road

Post breakfast, check out of the hotel and leave for Jaipur. As you reach the city, check into the hotel and relax for a while. After lunch, visit the famous 'City Palace'. The remarkable granite & marble structure is a perfect combination of Mughal and Rajput architecture. Then there is the popular 'Chandra Mahal Palace' where the former royal family still resides. Only the ground floor of the palace is open to the public.

The Maharaja Sawai Man Singh II museum gives a delightful feeling when you explore the collections of the King like artifacts, manuscripts, carpets and much more. The tour is incomplete without a visit to the Govind Dev Ji temple, dedicated to Lord Krishna.

Then visit Jantar Mantar later in the evening. There is a great collection of complex instruments. These instruments were once used to study astronomy. It is one of the largest observatories built by Maharaja Jai Singh II and is also a UNESCO World Heritage Site.

Return for the dinner to the hotel and stay overnight.

Day 6 : Sightseeing of Jaipur and Departure

After the breakfast, head to visit the Amber Fort. Halt to visit the Hawa Mahal on the way. Hawa Mahal is a fabulous tourist site in the city. The 5-storeyed structure has the shape of Lord Krishna's crown with 953 Jharokhas or windows. The windows are decorated beautifully and resemble a honeycomb. Get the glimpse of the rich heritage of the Rajputs as you visit the palace. This beautiful structure is predominantly a high screen wall made of pink and red sandstone. These windows facilitated royal women to get an eyeful of the street festivals and the busy city life whilst staying out of the view of the public. The palace is renowned for its rich cultural and architectural history.

With this check out of the hotel and head back with endless memories. This marks the end of service of the Rajasthan travel package.