Madhya Pradesh is truly regarded as the ‘Heart of India’ that beats with its unique natural and cultural flow. The state got the name because of its geographical position at the center of the Indian map. It is enriched with many ancient edifices that reflect the rich art and culture of India. From elegant temples, mosques, forts & Palace, museums to the classic rock-cut caves, the excellence of MP offers experiences as varied and cosmic as the state itself. This 7 Nights / 8-Days tour of Madhya Pradesh will take you to all these landmarks as well as a couple of the UNESCO World Heritage Sites in the state. The tour will commence in Delhi and cover the destinations like Bhopal, Sanchi, Bhimbetka, Ujjain, Mandu, Indore, and Maheshwar. So, without making any delay, join this tour and indulge in the great cultural heritage of India. 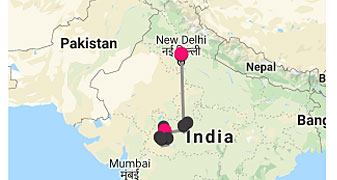 Welcome to Delhi. Here our tour representative will meet you at the airport and transfer you to the hotel for an overnight stay. After check-in at the hotel, you can rest for a while or go for a walk in the capital city of India. The lip-smacking street food will tempt you to try out some local dishes here. After exploring Delhi on your own, save some energy for tomorrow, as it is scheduled for an exciting sightseeing tour.

Start the tour by paying a tribute to Mahatma Gandhi at Raj Ghat, the memorial of the 'Father of the Nation'. Then, proceed to Qutub Minar, a heritage site flaunting 73-meters tall tower built by Qutubuddin Aibak. Next, visit Humayun's Tomb, the first garden-tomb in India built as a crematory for the Mughal emperor Humayun. From here, you will drive past the Parliament House, Rashtrapati Bhavan, and the Diplomatic Enclave where the foreign embassies are located and reach India Gate. This is a war memorial dedicated to the soldiers of the Indian Army who died during the First World War. End your tour by visiting the Red Fort. Admire the red sandstone architectural wonder and also enjoy a 'Light and Sound' show in the complex.

Return to your hotel and stay overnight.

Today after breakfast, check-out from the hotel and proceed towards New Delhi Railway Station to catch your train for Bhopal. On reaching Bhopal, check-in at the hotel and relax for a while. Thereafter get ready for a sightseeing tour of the capital city of Madhya Pradesh. The sites you will visit include Bharat Bhavan Museum and Birla Mandir, Indira Gandhi Rashtriya Manav Sangrahalaya and Taj-ul-Masjid.

Visit Bharat Bhavan Museum. A center of art and culture, the museum is a beautiful architectural building designed by famous architect Charles Correa on the bank of the Bhojtal or Upper Lake. The museum is dedicated to classical music, theatre, Indian art and sculpture, and tribal and folk art. Here, you can also visit the nearby Gohar Mahal, a beautiful palace named after the first woman ruler of Bhopal. Also, you can relax for some time on the bank of Bhojtal Lake. It is flanked with the picturesque hills and lush forests. If time permits you can also enjoy boating here. If you are a true lover of birds, visit 'Van Vihar National Park' and grab the opportunities to witness the stunning birdlife of the park. Then, visit Birla Mandir, dedicated to Lord Vishnu and Goddess Lakshmi.

The Indira Gandhi Rashtriya Manav Sangrahalaya is an anthropology museum where you can learn about the evolution of culture and man with special reference to India. Your last stop of the day is Taj-ul-Masjid, one of the largest mosques in Asia.

On day 4 of Madhya Pradesh Heritage Tour, relish your breakfast and get ready for a trip to Sanchi and Bhimbetka.

Located at a distance of 40 kilometers from Bhopal, Sanchi is famous for various monasteries, temples, stupas, and an Ashokan pillar. Feel the excellent serenity at the large stupas and temples in Sanchi that date back to the 3rd-century BC. Also visit the Sanchi Museum that exhibits the history, culture, and architecture of India.

Later on head to Bhimbetka. Bhimbetka is an archeological site located in the foothills of the Vindhya Mountains. At this World Heritage Site, you can see wonderful rock caves of Mesolithic or stone-age period. The rock-caves display unique paintings that reflect the cultural traditions of the people living in nearby villages.

After the excursion, return to the hotel for an overnight stay.

Today morning after breakfast, check-out from the hotel and leave for Indore by road. You will be rewarded with a scenic ride and en route, get the opportunity to explore a historically rich city, Ujjain.

Situated on the bank of the River Shipra, Ujjain is one of the holiest cities in India. It was the capital of the Gupta Dynasty during the reign of Chandragupta II who is popularly known as Vikramaditya. Dotted with several temples, Ujjain is the place of many legendary stories and one of the four places where Kumbh Mela is held. This is the place where Great ancient poet Kalidas lived and created his famous epics.

Bade Ganesh Temple is known for housing a vibrant idol of Lord Ganesh whereas Kal Bhairav Temple is the holy abode of the guardian deity of the city.

After visiting these two temples, you will go to Kaliadeh Palace. This palace, on the bank of the River Shipra, is designed in Persian architecture and offers a view of the stunning landscape. The palace also includes a Sun Temple within its complex.

Next, you will visit Navagraha Temple, a sacred place dedicated to the 'Nav Grah' or nine major celestial bodies. The second biggest temple in Ujjain, Gopal Mandir is really awe-inspiring for its excellent Maratha-style of architecture. After admiring this temple, you will visit the Harsiddhi Temple which is one of the 51 'Shakti Peethas'. The last stop is the iconic landmark of Ujjain, Mahakaleshwar Temple. The three-storied sacred building, located on the bank of Rudra Sagar Lake is the holy abode of Mahakaal, one of the twelve Jyotirlingas of Lord Shiva. After the temple excursion in Ujjain, continue your journey to Indore.

Once at Indore, check-in at the hotel for an overnight stay.

Your first stop is Hoshang Shah's Tomb - an ancient hill fort in Mandu and Ashrafi Mahal which was built as a Madrasa for the women. Next, visit Jahaz Mahal, a palace that looks like a ship that is about to sail. Then, get amused at the Hindola Mahal, the sloping sidewalls of the palace gives the impression that its inclined ramparts are swinging. End your tour at the Rani Rupmati's Pavilion, famous for the romantic story of Rani Rupmati and Baz Bahadur.

After breakfast, get ready for Mandu Maheshwar tour. Enjoy a stopover at Omkareshwar and go for sightseeing at this pilgrim center. Pay homage to Lord Shiva at Shri Omkar Mandhata Temple housing one of the 12 Jyotirlingas. Then, continue your journey to Maheshwar, a city that attracts both tourists as well as pilgrims.

Upon arrival at Maheshwar, check-in at the hotel and unwind yourself. Thereafter, move out to visit the markets. Don't forget to buy the beautiful and unique Maheshwari Saris and Fabric. If you still have some time to spare, visit Ahilya Bai Fort and Palace and Ek Mukhi Datta Temple. Return to the hotel for an overnight stay.

On the last day of your Maheshwar tour, relish a nutritious breakfast. After that, you will be taken to Indore Airport. Board the flight to Delhi. On reaching Delhi, continue your onward journey to your hometown with fond memories of Madhya Pradesh.