South India is dotted with numerous temples scattered all over the area. The South India Temple tour will take you to some well-known and highly revered temples. These temples act as the torchbearers of the glorious heritage of the country. South Indian temples are living museums as they exhibit the magnificent art forms that evolved over many centuries. This temple tour includes a visit to temples in Chennai, Kanchipuram, Mahabalipuram, Pondicherry, Swamimalai and Tanjore. These temples are rich sources of marvelous architecture, mythological legends, and ancient Dravidian culture. This is not just a simple Tamil Nadu temple tour but it will take you to places with astonishing architecture and give you a chance to view beautiful stone sculptures made during the period of famous Chola and Pallava Kings. 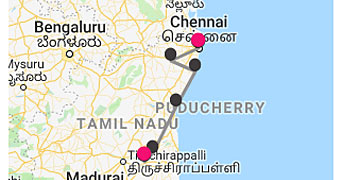 Our tour guide will meet you at the Chennai airport and help you to check-in at the decided hotel. After having rest for a while, you will start the Tamil Nadu temple tour by visiting the famous places in Chennai which include Kapaleeswarar Temple, Fort St. George, San Thome Cathedral, St. Thomas Mount and National Art Gallery.

Kapaleeswarar Temple is the most popular Shiva temple in Chennai and was built by Pallavas in the 7th-century featuring Dravidian architecture. It has intricate wood and stone carvings. Fort St. George was built by the British East India Company and later it acted as British headquarters. The fort was the first British garrison settlement in India. It houses Clive House and St. Mary's Church, the oldest Anglican Church. Now the church and a museum are opened to the public.

St. Thomas Mount is a small hillock popularly known as Parangi Malai. This is the place where St. Thomas, one of the twelve apostles of Christ who came to India, was martyred. San Thome Cathedral was founded by the Portuguese in 1523 and rebuilt by the British in 1896. This is the final resting place of St. Thomas and his tomb is found behind this cathedral. The National Art Gallery houses paintings from the 17th & 18th-century. It also houses beautiful sculptures and metal statues.

You will enjoy the sea breeze with a pleasant walk along the famous Marina beach before dinner.

After breakfast, start your trip to Mahabalipuram via Kanchipuram which was the capital of the Pallava Dynasty. The temples of Kanchipuram are well known for their grand architecture. Few of the most famous South Indian temples are in Kanchipuram. Most popular attractions include Ekambareswarar Temple, Kailasanathar Temple, Varadharaja Perumal Temple, and Sakkiswarar Temple.

Ekambareswarar Temple was built by the Pallavas in the 6th-century. It has a mango tree which is believed to be 3,500 years old. Kailasanathar Temple is the oldest temple in Kanchipuram. This temple has a unique sixteen sided Shiva Linga made out of black granite. Varadharaja Perumal Temple has a 100-pillared hall with striking architecture and it has a stone chain, a stone carving masterpiece. Sakkiswarar Temple is an architectural gem in Kanchipuram built by the Cholas. This temple is dedicated to Lord Shiva and is located near the famous Kamakshi Amman Temple.

Kanchipuram is one of the seven holiest places for Hindus in India. Kanchipuram is also famous for its hand weaved silk sarees. Continue your journey to Mahabalipuram, enjoy your time at the beach before dinner if you want to.

Overnight stay at the listed hotel in Mahabalipuram.

Arjuna's Penance depicts an extract from Mahabharata which shows how Arjuna performed severe penance to obtain Lord Shiva's weapon. The monument Descent of Ganges is found adjacent to Arjuna's Penance. Tiger Cave is a rock-cut temple complex in the village Saluvankuppam near Mahabalipuram. It has carvings of tiger heads at the entrance of the cave. They were made by the Pallavas in the 7th-century. The Shore Temple was built in the 8th-century and at that time Mahabalipuram was a busy seaport under the reign of Pallava kings. The Pancha Rathas were built in the 7th-century by the Pallavas. These are five chariots carved out of granite stone. Mahabalipuram has been declared as a UNESCO World Heritage Site.

Overnight stay at the listed hotel in Pondicherry.

After breakfast, start exploring Pondicherry, the enchanting tourist town, which is popularly known as the 'French Riviera of the East' as it was ruled by the French until 1954. This small town has stunning beaches, historical churches, charming cottages and relaxed streets. Major attractions in this town are the famous beaches, backwaters, Aurobindo Ashram, and Auroville.

Today, you will visit Auroville which is considered as a Universal Town where people from all over the world, of all culture and tradition, come and live together. It was founded in 1968. Next, you will visit the Aurobindo Ashram which was founded in 1926 and has grown from a small group of two dozen disciples to a community of nearly 2000 people. The ashram provides everything to its members to lead a happy and healthy life.

Enjoy at the famous beaches of Pondicherry like Promenade Beach, Paradise Beach, Serenity Beach and Auroville Beach. Promenade Beach is rocky and the most famous beach in Pondicherry. Paradise Beach is the cleanest beach maintained by Chunnambar Resort and Serenity Beach has a surfing training school near the Beach. You will also visit the fishing villages in Pondicherry. The famous fishing villages include Pillaichavady, Veerampattinam, Vambakeerapalayam, and Kotakuppam.

Start to Swamimalai after lunch and on the way you can enjoy a guided tour of Chidambaram Temple and Gangaikonda Cholapuram. In Chidambaram, Nataraja or Lord Shiva is worshipped as the 'Lord of Dance', and he appears as the cosmic dancer. The temple was built in the 10th-century when Chidambaram was the capital of the Chola Dynasty. This temple lies at the center point of the world's magnetic equator. Gangaikonda Cholapuram was built in the 11th-century by Rajendra Chola who was the son of Raja Raja Chola, who built Brihadeeswara Temple in Tanjore. Gangaikonda Cholapuram is one of the most important south Indian temples built during the reign of Chola Kings. This temple is a part of the Great Living Chola Temples. After a guided tour of these two temples check in at a listed hotel in Swamimalai.

Next, you will be visiting the Swamimalai temple which is dedicated to Lord Muruga/Karthik. It is one of the six holy shrines of Lord Muruga. The shrine lies on a hillock and there are sixty steps to reach the temple which denote the sixty Tamil years. It is believed that Lord Muruga explained the meaning of 'Om' to his father Lord Shiva at this place.

Stay overnight in the hotel.

After breakfast, continue the journey to Tanjore. After lunch in Tanjore visit the Brihadeeswara Temple, a shrine having great historical importance and is also known as the Big Temple. This temple is also a part of the Great Living Chola Temples and it is a brilliant example of Chola architecture. This temple is a UNESCO World Heritage Site.

Next, you will visit the Vijayanagar Fort, a wonderful historical structure and the residence of Maratha rulers from 1674 - 1855. It was built by the Nayaks and then again extended by the Maratha rulers. The fort houses Tanjore Palace, Sangeetha Mahal, a library and an exquisite art gallery with many paintings and sculptures.

The Shiva Ganga Garden is also a part of the fort complex. It has a park, a garden and a large square tank which was built in the 16th-century to provide water to Tanjore Palace. After lunch, you will be taken to Alangudi Temple, dedicated to Lord Shiva who is in the form of Abathsahayeswarar, the one who swallowed the poison to save humanity. This temple is also the home of Guru Bhagwan/ planet Jupiter and is also one of the famous Navagraha temples. It was built by Cholas and later renovated by the Nayakas. This temple is surrounded by three holy rivers Cauvery, Kollidam, and Vennaru.

The next temple is Chandra Bhagwan Temple which is also known as Thingalur Temple. This is one of the prominent Navagraha temples in south India. It is believed that Lord Chandra/Moon worshipped Lord Shiva here to receive his blessings.

Overnight stay at the listed hotel.

After breakfast, you will be taken to Madurai airport to fly back to your place after enjoying the Tamil Nadu temple tour.