Hill stations have always been a favorite destination among honeymooners, families, students, and people belonging to the corporate world. People, especially those who are living in metropolis always prefer the relaxing environment of a hill station because they offer a welcoming relief away from the hustle-bustle of day-to-day life. Our hill stations in South India tour package is designed keeping in mind the avid travelers and ensures that one cherishes matchless experiences at these awesome destinations.

The 5 Nights / 6 Days tour of South India hill stationsoffers you the opportunity to explore the lavishness of the natural riches as well as man-made wonders. As you reach Bangalore, you will enjoy a scenic road trip from to Coorg. The cool mountain air and winding roads serve as a unique antidote for your tiredness and fatigue. Bangalore is one metro city with so many sobriquets like ‘Silicon City’, ‘Garden City’, and the ‘Pub City of India’. On the other hand, Coorg which is also called the ‘Scotland of India’ is blessed with nature’s bounty, lush green vegetation, mesmerizing waterfalls, and picturesque viewpoints.

Also, you will also stay in the royal city of Mysore. In this city, you will get to witness the world-famous and one the largest palaces in the world, the Mysore Palace. Your last destination of South India is Wayanad that is located at elevated picturesque mountains along with green meadows of valleys, scenic mountains, blue-water lakes, wild forests, white-water springs and splendid natural beauty. Further,Hill Stations of South India tour includes overnight stays at comfortable accommodations to ensure a home-like environment. We also promise that you will have a great time with your loved ones. 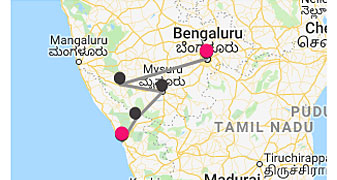 As you arrive in Bangalore, you will be received by our tour agent and your drive will start towards Coorg. It is the most affluent hill station in Karnataka and is also known as Kodagu. Coorg is well-known for breathtaking exotic scenery, forest-covered hills, lush greenery and coffee & spice plantations. It is also the largest producer of coffee in India. Tourists find them awestruck with the splendor of lush hills, sweet chirping of birds, sights of rolling valleys, fresh aroma of tea. Here, you can feel the magic of fresh mountain air. This makes you feel closer to nature and rejuvenates your senses. No wonder, Coorg is one of the best tourist places in South India.

Upon arrival, register yourself at the hotel reception and you can spend the rest of the day in whatever way you want.

An overnight stay is planned at the hotel.

Post a delicious breakfast at the hotel and leave for a half-day city tour of Coorg. Firstly, you will go to explore the coffee plantations where you will see the complete process of coffee making. The lush green coffee estate gives the amazing experience of gaining detailed knowledge of coffee cultivation in this region such as pruning techniques, picking, drying and so on. You will also enjoy a cup of Coorg coffee in a traditional way.

Then, move to explore the orchards in Coorg. They are located in the midst of coffee and pepper plantations. They are adorned with a natural pond and old trees and magnificence of the verdant hills. The place echoes the chirping of the birds and is filled with the sweet fragrance of the seasonal flowers.

Now, set your feet in Madikeri Fort which is a popular historical landmark of the southern part of India. It was built by Muddu Raja in the 17th-century. This majestic fort continues to stand in all its glory till date and gives the information about the bygone era. It is a testimony to the history of Coorg. The elevated structures of this fort also offer panoramic views of the town which are undoubtedly pristine and breathtaking.

Then, go to pay homage at Omkareswara Temple which features both Islamic and Gothic architectural styles. This temple is dedicated to Lord Shiva and was built by Linga Rajendra II in 1820. The shivalinga enshrined in this temple was brought from Kashi and installed as similar to that of a Muslim Dargah. Furthermore, this temple has also a water tank.

At last, your beautiful day ends with a comfortable overnight stay at the hotel.

In the morning, wake up and savor a southern cuisine and get ready to hit the road to Mysore. Counted as one of the most enchanting cities in South India, Mysore exudes its own charm. This city is famed for its magnificent monuments, royal heritage, splendid buildings and also rich traditions. It is mainly famous for its Mysore paintings, Mysore silk, Mysore Pak, Mysore ink, Mysore masala dosa, and Mysore Dussehra.

On reaching Mysore, proceed for check-in process at the hotel and rest for a while. After that, get ready to explore the Mysore Palace which is a perfect symbol of grandeur and opulence. It was the residence of rulers of the Wodeyar Dynasty who ruled the city for seven centuries. The intricate craftsmanship and brilliant architecture make it an incredible masterpiece in India and worldwide. The Mysore Palace consists of large halls, pavilions, numerous shrines. Its doorways and corridors tell the historic stories of the past. In the evening, this palace is illuminated by 98000 lights bulbs. The spectacular view cast a spell on the onlookers.

Now, seek the blessings of the Goddess at Chamundeshwari Temple which is situated on Chamundi Hill. It is considered as one of the 108 Shakti Peetha. This temple is dedicated to Goddess Durga. The idol here has 8 hands also known as Ashta Bhujas. The architectural style of this temple is unique and eye-catching. There are 7 golden Kalash at the top and the temple flaunts a 7-tier gopuram.

In the evening, head back to your pre-booked hotel and retire in your room for a good night's sleep.

On day 4 of your hill stations of South India tour, munch your breakfast at the hotel and check-out. Then, you will leave for Wayanad by car.

Wayanad is a green paradise which is nestled amidst the mountains of the Western Ghats. It is clean, enchanting, pristine, and hypnotizing. A paradise for newlywed couples, it is one of the prominent honeymoon places in South India This verdant hill station is full of dense forests, deep valleys, plantations, charming waterfalls, tangled jungles, lofty ridges, thrilling caves, and wildlife. Visitors can stay in the mud huts or tree houses and enjoy the thrills of the jungle life. Apart from this, Wayanad Wildlife Sanctuary is a prominent tourist attraction here and is home to tigers, Asiatic elephants, egrets and panthers.

When you reach Wayanad, check-in at your pre-decided hotel. The rest of the day is at your leisure.

An overnight stay at the hotel.

Kick start your day with a hearty breakfast and get ready to explore the attractions in Wayanad.

You will see the Glass House at Kottamuda. All the walls are made with glass. You can laze around in the warmth of morning sun and celebrate the true meaning of life with your loved ones. It is one of the best places to visit in South India.

Your next destination is Chembra Peak which is the highest peak of the Wayanad Hill Range. It lies at an altitude of 2000 meter above the sea level. It offers panoramic views of the town and nearby areas. This peak is covered by lush greenery and is famous for a heart-shaped lake, pristine nature and mesmerizing views. This place is popular amongst trekkers as it offers a wonderful trekking experience. Afterward, enjoy an excursion to Edakkal Caves, popular for exquisite rock and wall carvings. These caves hold archaeological and historical significance.

Now, head towards the Banasura Sagar Dam which is a picturesque dam nestled in the lap of the Banasura Hills. It is one of the largest earthen dams in India and is the second largest in Asia. It is also known as an embankment dam which is created by placing mounds of clay, rock, sand, or soil. The view of the sprawling reservoir from the top of the hill is mesmerizing. At last, visit Pazhassi Tomb, a famous tourist attraction where thousands of visitors regularly pay homage to Pazhassi Raja. It is situated on the banks of River Kabini. This place also contains a sword of Pazhassi Raja and showcase other information about the cultural history of Kerala.

In the evening, come back to the hotel for an overnight stay in Wayanad.

After having your scrumptious breakfast, pack your bags and check out from the hotel. Our tour representative will drop you at Calicut Airport / Railway Station for your onward destination.