Goa is popularly known as a 'tourist paradise'. It is one of the best places to experience an unforgettable holiday in India. Goa has the best beaches in India and the dynamic essence of this city can be felt everywhere. North Goa is a cultural hub with the vibrant markets and cafes while South Goa is famous for its stunning beaches. This North & South Goa tour will cover both the regions of Goa and you will enjoy viewing the colorful houses, lush greenery, and serene beaches. This Goa sightseeing tour will allow you to explore the churches, forts, beaches, flea markets, and delicious Goan cuisine. 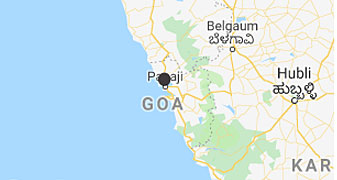 Our tour representative will meet you at the airport and guide you with a smooth check-in at one of the listed resorts/hotels. Freshen up and relax in your room. The rest of the day is at your leisure. You can stroll around the beaches and spend some quality time with your loved ones. You can add more happiness to your Goa sightseeing by exploring the nearby market or try some of the delicious Goan cuisines.

Wake up refreshed after a good sleep and have a delicious breakfast. After this, you will start your South Goa sightseeing tour. You will be taken to old Goa to view the famous churches like St. Francis Xavier Church, Basilica of Bom Jesus, Se Cathedral, St. Cajetan Church, St. Catherine's Church, Tower of St. Augustine, and Convent of St. Monica. After completing your old Goa tour, you will head towards South Goa. South Goa tour package includes visiting the well-known Shanta Durga Temple and Mangueshi Temple.

After this, you will be taken to Panjim, the capital of Goa. Enjoy a walk along the Latin Quarter of Goa which is a popular attraction in Goa. Also known as Fontainhas, it was the residential area of Portuguese rulers and administrative officers. It has narrow cobblestoned streets with quaint cottages of colonial architecture. There is a Maruti temple in the Mala area of Fontainhas. It stands on a hilltop overlooking the Latin Quarter of Goa.

Your next visit will be to the State Museum and Mary Immaculate Church. State Museum has more than 8000 artifacts on display including stone sculptures, paintings, manuscripts, and coins. Mary Immaculate church is a simple Portuguese Baroque-style church. It is one of the first churches to be built in Goa.

You will end the day by exploring the markets of Panjim, it is the ideal shopping place that has an exotic Goan touch to it. It is a mix of street-side stalls and shopping malls where you can buy cashew nuts, wines, handicrafts, and spices.

Francis Xavier Church is of stunning Doric style architecture built in a beautiful location. St. Francis Xavier is the patron saint of this church. Francis Xavier was a European Missionary sent to Goa in the early days of Portuguese rule to help restore the Christian values.

Basilica of Bom Jesus is one of the oldest churches in the world. It is built on Baroque architecture with a marble floor and interiors of the church have ornamental work with the precious stones. It has the mortal remains of St. Francis Xavier in a glass container encased in a silver casket. It is a UNESCO World Heritage Site.

Se Cathedral is an ancient church which is built on a style of Portuguese Manueline architecture. It was built to commemorate the Portuguese victory over an invading Muslim Army in the early 16th century.

St. Cajetan Church is dedicated to Our Lady of Divine Providence. It is of Corinthian style architecture and it is one of the most beautiful churches in Goa.

St. Catherine's Church is built on Renaissance-style architecture and the church has a beautiful altar and magnificent artworks. It is a UNESCO World Heritage Site and also protected by the Archaeological Survey of India.

Tower of Augustine is a lofty tower that is standing proudly, defying the vagaries of weather and time. It is the only surviving tower of four that was a part of St. Augustine's church and it is a UNESCO World Heritage Site.

Covent of Santa Monica is also known as the Royal Monastery of Santa Monica which was the first nunnery of the East and the only convent for nuns. It is a perfect blend of Tuscan, Corinthian, Doric, and composite style of architecture.

Shanta Durga temple is the biggest and most important temple in Goa. It is a private temple complex belonging to the Goud Saraswat Brahmin community. It is of Indo-Portuguese architecture with pyramidal shikhara, Roman-arched windows, and a flat dome.

Mangueshi Temple is dedicated to Lord Mangueshi, an incarnation of Lord Shiva. This is the only temple for Lord Shiva in the Goa region.

Return to the resort in the evening and have a scrumptious dinner. Overnight stay at the hotel.

After breakfast, checkout from the hotel and proceed to North Goa. Our tour representative will escort you to one of the listed hotels in North Goa. Spend the day doing leisurely activities. North Goa is famous for its beautiful beaches which are popular for water sports, nightclubs, spas, tattoo parlors, and amazing fast food. You can roam around and explore the local markets.

After a delicious breakfast, visit the famous beaches and forts of North Goa. You will be taken to the beautiful Vagator Beach which is a combination of soft white sand, rocky cliffs, and two springs. This is the best beach in Goa to surf and swim and Chapora Fort can be seen from this beach. Vagator beach is divided into Little Vagator or Ozran Beach, facing the left side and Big Vagator Beach facing the right side of the sea.

Your next visit will be to the Anjuna Beach which is well-known for its natural beauty. With its white sands and swaying palms, it is a famous location for beach parties. Water sports like windsurfing and yachting are popular here. You can opt for water sports activities as well.

Calangute Beach and Baga Beach are found near Vagator beach. Calangute beach is a picturesque beach and the largest beach in North Goa. It is also known as the 'Queen of Beaches'. It is known for parasailing, jet skiing, and banana ride. Baga Beach is the most popular beach and the perfect destination to enjoy the nightlife of Goa with its famous nightclubs. It has designer stores and street-side markets. This beach is an extension of Calangute beach and is named after the Baga Creek.

Candolim Beach is one of the longest beaches in Goa. The Aguada Fort overlooks the sea here. This is a busy beach lined with sundecks and umbrellas. The Aguada Fort is a well-preserved Portuguese fort with a lighthouse. This fort was built to protect Goa from potential enemy attacks through river Mandovi. The lighthouse is the oldest of its kind in Asia and offers a panoramic view of the ocean. It has also been used as Central Jail.

The additional experiences that can be added to your holiday in India are snorkeling, parasailing, scuba diving, surfing and Mandovi river sunset cruise.

Check out from the hotel after having a delicious breakfast and you will be dropped at the airport/ railway station for your onward journey to your destination with lots of memories of Goa sightseeing.