An opportunity to delight in an enthralling bike trip on the rugged terrains lures the youngsters to Leh Ladakh. Manali-Leh Highway is one of the best available biking routes for daredevils. The scenic beauty en route is really admirable but only if the bike trip is planned at the right time. Some elements that raise the fun quotient to the next level are hairpin bends, narrow roads, heavy snowfall, land sliding, rainfall and much more. But with us, you can easily plan your Leh Ladakh Bike Tour 2020 without any hassle. The exciting expedition gives you an adrenaline rush by taking you to the adventurous roads in India. Also, the adventurous trip will surely change the way you think about the country.

Standing out amongst the rest of Ladakh Motorcycle Tours, this 9 Nights / 10 Days Ladakh bike tour from Manali is a thrilling and challenging journey. Explore the snow-capped mountains, spellbinding nature, picturesque hamlet and enchanting sights of glaciers. The 10-day package of the Ladakh motorcycle tour starts from Manali and ends in Manali. A tranquil and serene place, Manali has been blessed with extraordinary scenic beauty, gushing blue streams, sprawling meadows and much more. Feel the goosebumps as you drive your bike across Rohtang Pass which is a high mountain pass on the eastern Pir Panjal Range. The pass connects Lahaul and Spiti valleys of Himachal Pradesh with the Kullu Valley.

Lahaul Valley is a potpourri of beautiful mountain villages and fascinating Buddhist art and culture. The first half at the Jispa Village will surely take all your weariness away. Your next destination is Sarchu which is a major halt point in the Himalayas on the Manali-Leh highway. While delighting in your journey towards Leh, you will be crossing Taglang La and Changspa. Go to Khardung La, which is a perfect gateway to gateway to the Shyok and Nubra valleys. A paradise for adventure enthusiasts and mountain biking aficionados, the pass ranks amongst the highest motorable roads in the world. Exploring the fascinating Pangong Lake which is counted as one of the most prominent lakes in Leh is an added plus. The tranquility and serenity of Pangong Lake attract tourists from all over the world. A visit to Chang La is also included in the trip. The bike expedition becomes all the more exciting with an excursion to this pass because the melting snow transforms into small streams thereby making your ride a little bit difficult. No wonder, the abundant scenic beauty, and meandering roads make Leh Ladakh a famous motor-biking destination in India. 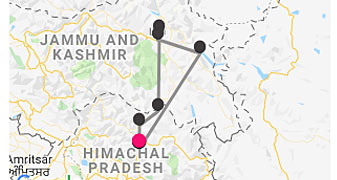 Upon arrival in Manali, register yourself at the hotel reception and help yourself to combat tiredness. After having your lunch, get ready for your Ladakh Bike Trip. At first, you will drive towards Kullu Valley. It is a beautiful valley in Himachal Pradesh which is formed by the Beas River between Manali & Larji. This valley is popular for its temples, a majestic hill covered with pine trees, apple orchards, splendid beauty and deodar forests. You can enjoy adventure sports like river rafting, paragliding, trekking, hiking, mountaineering, etc.

At the end of the day come back to the hotel for an overnight stay.

Get up early in the morning and start your Bike Ride to Ladakh. En route, you will pass through Rohtang Pass which is perched at the elevation of 3798 m above sea level. It is a high mountain pass on the eastern Pir Panjal Range of the Himalayas. The pass offers a thrilling experience to the riders and is a dangerous place because of unpredictable snowstorms. Thus, an excursion to the place is not for the faint-hearted persons. During the span of 6 months, it is thronged by countless tourists from all around the world. The bikers reach here crossing dangerous curves, slippery roads and sometimes facing extremely rough weather.

After that, you will pass by Lahaul Valley before reaching Jispa. This valley is adorned with massive glaciers, high mountains, high passes, pristine rivers and medieval monasteries. Thus, this region is rightly called as the Barren Splendor of Himachal Pradesh. In the evening, you will reach Jispa. Savor hot momos and Thupka, a traditional Himalayan soup which is made from vegetables & meat.

Jispa is the small village which is located near the confluence of two streams merging with Bhaga River. Jispa is situated at an altitude of 10,500 ft above sea level and offers picturesque views of the snow-covered mountains. This village has several Buddhist stupas or chortens which you should visit.

On day 3 of your Leh Ladakh Bike Tour, you will start your motorbike ride towards Sarchu in the morning. En route, you will visit Bara-lacha Pass which is a high mountain pass positioned at the height of 16,040 feet above sea level. This pass offers numerous breathtaking views which leave the travelers spellbound. This barren land without any shops and hotels present a sight to behold.

Continue your journey towards Sarchu. It is a small village located on the boundary of Himachal and Ladakh. It is an overnight stopover where tourists get tented accommodation to relax for the night. After arriving, proceed to Sarchu camp. The rest of the day is at leisure. Take sufficient fluids and unwind yourself.

Overnight stay in the camp.

Early in the morning, you will leave for Leh. Your bike will pass by a remote area surrounded mountains where you will see nomads, shepherds and prayers flags adorning the place. Next, you will cross one of the highest motorable road in the world – Taglang La. It is situated at an elevation of 5328 m above the sea level and features a famous holy temple. During your journey, you will explore Thiksey and Shey monasteries that are perched on hilltops. Thiksey Monastery in Leh flaunts a magnificent complex painted in yellow and red which rises grandly above the numerous monk cells. One can marvel at the panoramic view with the Zanskar range in the backdrop of the terrace of this monastery. The Shey Monastery was built in the memory of Deldon Namgyal's father in 1655. This place is famous for its giant copper with a gilded gold statue of Shakyamuni Buddha or Gautam Buddha in a sitting position.

As you make your way to the Changspa, you are rewarded with stunning views of mountain valleys and winding roads. Reach on the borders of Changspa, check-in at your pre-booked hotel. The rest of the day is at your disposal. Here, you can taste the local dishes and observe the culture of Ladakh.

Enjoy an overnight stay at your hotel.

On the 5th day of the tour, you will start the ride for Nubra Valley after having breakfast. We will stop at South Pullu to have some snacks and enjoy the scenic beauty of the valley. Then you will be headed for Khardung La Pass which is one of the world’s highest motorable roads. Enjoy the time hee, glare at the majestic landscape, and click some pictures. After crossing Khardungla Top we will stop at North Pullu for another break. After exploring the Diskit monastery head towards Hunder sand dunes where you can ride a double hump camel On reaching your camp freshen up for the discussion session. Enjoy your meal at the camp.

Overnight stay at the camp in Nubra Valley.

Today you will be driving alongside the River Shyok. After breakfast, you will be briefed about the day’s ride and leave for Pangong from Nubra. Memuts are another one speciality of these roads. After lunch at Durbok, our stop will be Pangong. Enjoy the majestic landscape of the valley and click some pretty pictures on the way.

In the evening check into your camps. The rest of the time is at your leisure. Spend the evening alongside the lake and soak in the majestic beauty of the valley.

Overnight stay in a camp at Pangong.

Have your breakfast early in the morning and get ready to head towards Leh. Upon your arrival at Leh, you will have an assisted check-in at the hotel. Rest for a while and then embark on the exploration tour of the Leh. Enjoy shopping at bazaars and visit the Shanti Stupa, the Buddhist white-dome huge structure which overlooks Changspa. Enjoy a great view of the Indus Valley and the Zanskar range.

Overnight stay at the hotel in Leh.

Bid adieu to Leh and begin your ride. En-route, you will see Pang, a scenic spot in Ladakh's landscape. Enjoy the breathtaking beauty of the valley. Halt at Sarchu which lies in the middle of the two beautiful destinations, Manali and Leh. Upon your arrival, check-in at the camp in Sarchu. The rest of the time is at your leisure. Take a walk and delight in the enchanting charm of this quaint little town.

Overnight stay at the camp in Sarchu.

In the morning, begin your drive through the Sarchu plain and reach the Baralacha plain till noon. Enjoy the beauty crossing through Lahaul ranges and reach Rohtang pass. Rohtang pass will challenge you with mini- rivers of mud. Ride through the obstacles to reach Manali. Check-in at the hotel upon your arrival and the rest of the time is at your leisure.

Have a comfortable stay at the hotel in Manali.

This is the last day of the adventurous bike tour. We bid you adieu with fond memories of your adventure in Ladakh.