Treat your eyes to the scenic beauty and your senses to the utter serenity with Gokarna & Kerala Tour Package from Mumbai. Tastefully crafted, the itinerary sets the mood right for a relaxing vacation away from the hustle and bustle of the city life. The complete wellbeing of the travelers is guaranteed when yoga and meditation team up with centuries-old Ayurveda therapies of Kerala. The tour also takes you to an interesting voyage covering major attractions like Juhu Beach, Gateway of India, Mahabaleshwar Temple and St. Francis Church, etc. 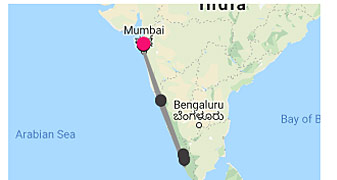 After reaching Mumbai airport, meet our tour representative who assists while you take a transfer to your pre-booked hotel. Complete the check-in formalities and relax for some time in the room.

Mumbai, a city that never sleeps, is one of the major tourist destinations of India. Modern, beautiful, ancient, lively, Mumbai is a blend of all things colorful. The city is dotted with some breathtaking beaches, overcrowded markets, historical monuments and much more. Also, the city houses some of the most beautiful UNESCO World Heritage Sites.

Spend your day at leisure. In the evening, go for a stroll at Marine Drive. Later, return to the hotel for dinner. Overnight stay at the hotel in Mumbai.

Begin your day with an early morning Yoga session that will be organized in the hotel premises for the guests. After this refreshing Yoga session, munch some healthy breakfast. Later, embark on your local sightseeing tour of Mumbai.

Visit the Prince of Wales Museum, which was built to commemorate King Gorge V's first visit to India. Then, start driving to Malabar Hills and visit the beautiful Hanging Gardens and enjoy a panoramic view of the city. Later, visit major attractions of Mumbai city like Gateway of India- the historical monument built during British Raj in Mumbai city, Juhu Beach- popular for film shooting and local eateries, Victoria Terminus-UNESCO World Heritage Site and the Dhobi Ghat.

After sightseeing all day, return to the hotel for dinner. Stay overnight at the hotel in Mumbai.

This morning, have your breakfast and then take a transfer to Mumbai airport to board a flight to your next destination- Cochin. On reaching Cochin, check-in at your pre-booked hotel. Take some rest and then leave for your guided sightseeing tour of Cochin.

Cochin has been featured in National Geographic Traveler's '50 greatest places of a lifetime' under the 'Urban Space' category. Also known as the Gateway to Kerala, Cochin was the first European colonial settlement in India. Surrounded by the Western Ghats and the Arabian Sea, Cochin is best known for its rich culture, industrial growth, and historic monuments.

Visit major tourist attractions of Cochin like Mattancherry Palace- also known as Dutch Palace, the palace features Kerala Murals which feature, St. Francis Church- oldest European Church in India and the Jewish Synagogue- the oldest synagogue in all the 53 member countries. In the evening, enjoy the spectacular view of those giant Chinese Fishing Nets being lowered at the Vasco-da-Gama Square. The Chinese Fishing Nets are the star highlight of Cochin.

Later, reach the hotel for dinner and stay overnight at the hotel in Cochin.

Wake up early in the morning to attend your yoga session at the hotel. After Yoga, have your breakfast and board a houseboat to Alleppey. En-route, enjoy the spectacular views and tranquility of Kerala backwaters. Have a look at those palm-fringed borders, local villages and serene backwater while cruising. Enjoy your dinner and stay overnight at the beautiful houseboat.

This early morning, you disembark from your boat at Alleppey. Start driving to Cochin Airport to board the morning flight to Goa. On reaching Goa airport, meet our tour representative who assists while you reach Gokarna. After reaching Gokarna, check into your pre-booked resort.

A small temple town set on the western coast of India in the Uttara Kannada district of Karnataka, Gokarna is best known for Mahabaleshwar temple which is dedicated to Lord Shiva, who is also known as Mahabaleshwara. The temple is believed to be the original image of Lord Shiva's lingam (Atmalinga). Other than this temple, there are many more temples in the town.

Spend the day at leisure and enjoy the facilities offered at the resort. You can indulge in activities like yoga and meditation which are available at the resort.

Later, enjoy dinner and overnight stay at the hotel in Gokarna.

From Day 6 to Day 11, you can attend yoga and meditation sessions in small groups under the guidance of the professional instructor. The sessions will be organized within the hotel premises. These sessions help in attaining a balance between the mind, body, and soul of an individual. You can spend the rest of the day at leisure or go for a stroll around the place in the morning. You can also go to seek the blessings of Lord Shiva at the small and beautiful temples of Gokarna. Do not miss taking up Ayurveda therapies, treatments and massages here, completely rejuvenating your mind, body, and soul.

Stay overnight at the resort in Gokarna.

Have your breakfast this morning and then check-out from the hotel in the morning. Start driving to Goa and on reaching; take a transfer to Goa airport to board your flight to Mumbai. As you reach Mumbai, check-in at the hotel and relax in the comfort of its room. Have your dinner and then leave for Mumbai airport to board a flight for onward journey.