Lord Shiva and Lord Vishnu are two of three most revered Lords in Hinduism. The Badrinath Kedarnath Yatra 2020 takes you to the holy abodes of these two lords. The tourincludes paying homage at Badrinath and Kedarnath Dham in Uttarakhand. These two destinations are imperative shrines with a rich past and hold extreme prominence in the Hindu religion. Pilgrims take up the arduous journey to reach the shrine in order to offer prayers to Lord Shiva and Lord Vishnu. Scores of devotees throng here from all over India to get enlightened with divine knowledge.

This 5 Nights / 6 Days Badrinath Kedarnath Tour Package takes the travelers on a comprehensive Do Dham Yatra. This spiritual tour starts from Haridwar and proceeds to Guptkashi which is a religious temple town of Uttarakhand. Another destination included in the itinerary is Gaurikund. It is the commencement point of the trek to the sacred shrine of Kedarnath Temple. Reckoned as one of the most prestigious and sacred Hindu temples in Uttarakhand the Kedarnath Dham is home to one of the twelve Jyotirlingas of Lord Shiva. The zeal of devotees reaching the shrine to get a glimpse of the lingam is worth admiring.

The tour also includes a trip to Joshimath which is the winter seat of Lord Badri whose idol is brought down from Badrinath temple to Vasudeva shrine during this season. The idol of the Lord in the Badrinath Temple is considered to be one of the 8 self-manifested or swayam vyakta kshetras statues of Vishnu. The sanctity of Badrinath Temple allures scores of devotees from far and near. Before the trip ends, you will also be taken toRudraprayag. Counted as one of the Panch Prayag (five confluences) of Alaknanda River, the point of confluence of rivers Alaknanda and Mandakini Rudraprayag flaunts sacred rivers, majestic Himalayas and a rich variety of fauna and flora.

At last, explore Rishikesh which is hailed as the Yoga Capital of the World. The holy town is the hub of many ancient temples, yoga ashrams, adventure sports, and popular cafes. With Badrinath Kedarnath Yatra, allowsthe tourists to cherish an engrossing blend of holiness, spirituality, and unparalleled beauty of nature. 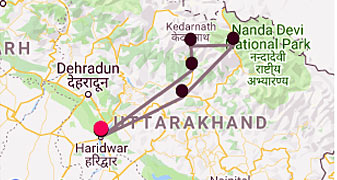 As you reach Haridwar, your journey will start towards Guptkashi, also known as Gupta Kashi. It is located at an elevation of 1319 m above sea level. Guptkashi has many ancient shrines like Ardhnareshwar Temple and Vishwanath Temple etc. The main attraction of this place is Manikarnik Kund where River Ganga and the Yamuna meet. You can marvel at the mesmerizing backdrop of the enchanting snow-covered peaks of Chaukhamba Mountains from here.

Upon arrival in Guptkashi, you will proceed for check-in at the hotel. Rest for a while and then go for a medical check-up which is necessary to continue your journey to Kedarnath. After that, come back to the hotel and savor your dinner.

Munch your breakfast and check-out from the hotel. You will drive to Gaurikund by road. It is a base camp for the trek to Kedarnath Temple and a Hindu pilgrimage site. It is perched at an altitude of 1982 m above sea level. The lush green forest of this place offers panoramic views and serene environs. As per common beliefs, Lord Shiva accepted to marry Parvati at this place only.

Here you can hire a horse, palki or palanquin or decide to undertake the trek on foot and further proceed to Kedarnath. Counted as one of the Char Dhams in Uttarakhand, Kedarnath is situated at an elevation of 3586 m above sea level. When you start your journey to Kedarnath, you will see the mesmerizing views of majestic mountain peaks of the Himalayas, enjoy the balmy weather and above all the pure ambiance will give you a feeling of ultimate euphoria.

You will also come across River Mandakini. This river is considered pious by the Hindus. It offers spiritual bliss to millions of devotees. After reaching your desired destination, check-in at the Government cottages or camps.

Have your dinner and stay for the night in the camp.

Wake up early in the morning as your Kedarnath Badrinath Tour allows you to seek blessings of Lord Shiva at Kedarnath Temple at around 4:45 am. Attend the "Abhishekam" ceremony of the almighty and bask in the bliss.

Kedarnath Temple is the highest among the twelve Jyotirlingas and is nestled at an astonishing height of 3584 meters above sea level near the head of Mandakini River. Every year, millions of devotees visit this place due to its religious significance and sanctity. Lord Shiva has another name "Kedar" that means the Lord of fields. It is believed that worshiping at this holy shrine opens up doorways to "Moksha" or Salvation. The spiritual value, interesting history and fascinating architecture attract tourists from far and near.

Later, come back to the government camp and take your luggage. Return to Gaurikund from Kedarnath. Upon arrival on Gaurikund, you will drive back to Guptkashi.

Stay overnight at your lodge.

In the morning, after having a scrumptious breakfast get ready to visit the holy shrine, Badrinath Dham via Joshimath. Also known as Jyotirmath, it is a quaint hill town nestled amidst the lap of snow-capped Himalayas. This valley offers mesmerizingly views on all sides. It includes many temples and other religious sites. Also, the place serves as the base camp for tourists who want to trek to the higher regions.

When you will reach Badrinath, get accommodated at your pre-booked hotel and have some snacks. In the evening, you will go to the Badrinath Temple. Bathe in hot water spring, Tapt Kund before paying homage at Badrinath Dham. It is also called the Badrinarayan Temple and is dedicated to Lord Vishnu. This temple is situated at the height 10,279 feet above sea level and nestled between the Nar and Narayan peaks. The black stone idol of Lord Vishnu is in the form of Saligram and the shrine ranks amongst 108 Divya Desams dedicated to Lord Vishnu. The Badrinath Temple with its serene beauty and purity brings you into a different world, bereft of sins and chaos.

Thereafter, come back to your hotel. Here, enjoy your dinner and relax for the night.

On 5th day of Badrinath and Kedarnath tour, you will again visit Badrinathji Temple. After that, come back to the hotel and have your breakfast. Thereafter, get ready to see other must-visit places of Badrinath. Firstly, visit Mana Village, the last Indian village. It is a quaint tiny hamlet which is situated on the Indo-Tibetan border. The small houses of this village are built in a narrow lane leading up towards the mountains. Next, proceed to Ganesh Gufa, a naturally formed cave. It is surrounded by lush green trees and offers a pleasant view of the Himalayan ridges. It is believed that Lord Ganesh penned Mahabharata in this cave as dictated by Rishi Ved Vyas Ji. Thus, it holds a high religious significance.

Now, go to Mata Murti Temple which is a sacred Hindu shrine dedicated to Mata Murti who is the mother of Badrinath. According to Hindu beliefs, Mata Murti prayed with utmost dedication to Lord Vishnu and requested him to take birth from her womb as his next incarnation. Her wish was granted by the almighty. At last, you will see Vyas Gufa, the cave of Veda Vyas Ji. It is the sacred place where Sage Vyas composed the epic Mahabharata with the help of Lord Ganesha. Also, many other Puranas, Veda, and Sutras were also documented by Maharishi Vyas in this cave. The roof of this cave resembles the pages of a script.

In the afternoon, you will begin your journey towards Rudraprayag via Karanprayag. Rudraprayag is situated at the confluence of two rivers Mandakini and Alaknanda. It is believed that Narad was blessed by Lord Shiva at this place and appeared in the Rudra avatar. It is located at an elevation of 610 m above sea level and blessed with nature's bounty. The place also offers a wonderful experience of pure serenity.

Upon arrival, check-in the hotel and freshen-up. The rest of the day is at leisure. You can go to see popular places such as Koteshwar Mahadev Temple, Indrasani Mansa Devi Temple, Maa Hariyali Devi Temple, Augustmuni Temple and many more.

At night, savor your dinner and retire for the day at the hotel.

It is the last day of your Divine Do Dham Yatra. Post breakfast, start your journey to Rishikesh. Rishikesh is one such place that allows you to cherish the most beautiful blend of spiritual and adrenaline pumping experiences. This place is the home to Sadhus (saints) and there are numerous ashrams teaching yoga, spirituality, meditation and Ayurveda.

After reaching there, visit the two hanging bridges – Ram Jhula and Laxman Jhula. Ram Jhula is positioned in Muni Ki Reti and was constructed later than the Laxman Jhula. The Ram Jhula is placed a few miles downstream from Laxman Jhula and is slightly bigger. When you take a walk on this bridge, you will observe the Ganga River gushing below with full force while you are surrounded by beautiful Himalayan peaks.

Next, move to Laxman Jhula which is the iconic religious landmark of Rishikesh. This bridge got its name from Laxman, the younger brother of Lord Rama. It is believed that once both of them crossed the holy river using two jute ropes. When you walk through the bridge, you can marvel at many views like magnificent views of mountain ranges, the sun coloring the skies orange while bidding adieu for the day, hear the sound of the huge bells, observe different hues of river Ganga, and so on.

In the evening, you will head towards Haridwar. After arrival, go to Haridwar railway station for your onward journey.