Marvelous monuments and splendid temples depict the prosperous history of Karnataka. The 5 days and 4 nights Karnataka Heritage tour help you to soak-in the divine aura and marvelous architectural wonders in the form of temples and monuments. Tranquility and spirituality prevail in the temples of Karnataka. The monuments here articulate the tales of the glorious days of the bygone era when the state was ruled by various monarchs.

The meticulously designed itinerary covers destinations like Bangalore, Hospet, Hampi, Anegundi, and Kishkindha. All these destinations boast of ancient ruins, some of which are UNESCO World Heritage Site and sacred temples. So, get ready for a heritage and cultural tour of Karnataka. 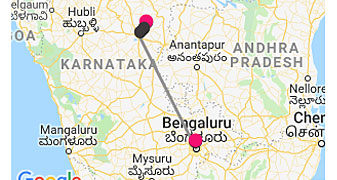 Upon reaching the Bangalore airport your Karnataka Heritage tour starts, meet our tour representative who will help you with the guided transfer to the hotel. Complete the check-in formalities and savor delicious breakfast. Thereafter, get ready for the sightseeing tour of Bengaluru. Also known as the 'Garden City' or the 'IT Hub', Bengaluru delineate modern India. The city is dotted with gardens, historical places, temples, museums and various attractions that lure numerous tourists.

The first attraction of the trip will be Gavi Gangadhareshwara Temple – a perfect example of Indian rock-cut architecture. This cave temple is built in a natural cave in Gavipuram, the temple is dedicated to Lord Shiva. From there, you will be taken to the Bull Temple, the biggest temple of Nandi in the world. The architectural style of the temple is mainly the Dravidian style. The interesting thing about the temple is that there is a statue of Lord Ganesha which is built of butter and the sculpture does not melt or change its shape.

Next in the itinerary is the Lalbagh Botanical Garden, the garden which features a glasshouse and largest collection of tropical plants. A lake adds charm to the place. Post this, you will be visiting the Tipu Sultan's Summer Palace. The palace was the summer residence of the Tipu Sultan, the ruler of Mysore. This palace is situated in the Bangalore Fort and it is a perfect example of Indo-Islamic architecture. Visvesvaraya Technological Museum, Cubbon Park are the other popular highlights of the trip. Afterward, pay homage at ISKCON Temple. Dedicated to Radha and Krishna, it is one of the largest ISKCON temples in the world.

The evening is scheduled for shopping at Commercial Street. The street is a paradise for shopaholics and gives you an opportunity to shop till you drop.

After the sightseeing tour of Bengaluru, return to the hotel and have a sumptuous dinner. Overnight stay at the hotel in Bengaluru.

Post breakfast, check-out from the hotel. Now, hit the roads to Hospet. Get a chance to visit Chitradurga Fort en route. Outstretched over a peak and seven hills, the fort is truly majestic. Built-in a series of seven concentric fortification walls, the fort has numerous passages, masjid, a citadel, and water reservoirs, warehouses for oil and grains and ancient temples. The Hidimbeshwara Temple steals the limelight. This cave temple has a carved design on the ceiling. The beautifully carved figures and images intricate beautifully on the pillars of the temple. Savor a delectable lunch after visiting the fort, this is followed by the drive to Hospet.

On reaching Hospet, complete the check-in formalities. Nestled along the Tungabhadra River, Hospet is the beautiful city known for its monuments. Titled as 'Steel City' or 'Back Door of Vijayanagara', the town enjoys great historical significance as well. The night view of the Tungabhadra Dam is so mesmerizing that it will you awe-struck.

Have a delicious dinner at the hotel. Enjoy a comfortable overnight stay in the hotel.

Start the day with a hearty breakfast. Subsequently, you will be taken to the day tour to Hampi, which is known for its Group of Monuments, entitled as the UNESCO World Heritage Site. Climb to the countless boulders in Hampi. Marvel at the ancient ruins and be stunned by the architectural craftsmanship of the bygone era.

The Karnataka Hampi tour starts with exploring the Kadalekalu Ganesha, an ancient temple which is situated on the slope of the Hemakuta Hill, housing a huge sculpture of Lord Ganesha and features elaborate carvings. The series of attractions which you will be visiting are Badavilinga Temple – an excellent temple dedicated to Lord Shiva, Hazara Rama Temple – a holy shrine famed for panels depicting the story of Ramayana and beautiful bas relics, Sasivekalu Ganesha Temple – the temple is a home to statute of Lord Ganesha carved out of a single rock, Virupaksha Temple – the popular temple is dedicated to Lord Shiva, Krishna temple – the sacred place with unusual architecture and is dedicated to infant Krishna.

Other attractions which are in the bucket list are Sister Stones – two giant boulders leaning on each other, Lakshmi Narasimha Statue – a grand monolithic statue with rare architecture, Vijay Vittala Temple – an amazing sculpture in the form of a moving chariot, Elephant Stable – an edifice consisting of domed chambers and was used for parking the royal elephants, Underground Shiva Temple – also known as Prasanna Virupaksha, the temple lies below ground level and is often flooded with water, Queen's Bath – the bathing chamber where kings and their wives used to bath, King's Balance – a stone scale that dates back to 15th century and was once used to weigh the king against gold to be given as charity, Mahanavami Dibba – a royal enclosure, Purandara Dasa Mantapa – dedicated to legendary poet Purandara Dasa, the ancient bridge of Hampi – the bridge is almost in state of ruins. Lotus Mahal, Palace area and Mint House are other top tourist attractions in Hampi.

Get ready for an entertaining evening, as you will be taken to the Tungabhadra Dam Garden. Enjoy the musical fountain show which will beguile you to the core. Water dancing to the tunes and changing colors with the musical beats looks awesome.

After spending an exciting day, return to the hotel and have a sumptuous dinner. Overnight stay at the hotel in Hampi.

Satiate your hunger with a healthy breakfast. An excursion to Anegundi and Kishkindha by road is arranged for you. Anegundi is a place that boasts of great historical significance. Nestled on the northern bank of Tungabhadra River, the quaint village is much older than the Hampi.

Get ready to explore the popular places in Anegundi like Tungabhadra River - a river with number of twists and turns, Pampa Sarovar – one of the five sacred lakes or Sarovar in India, Huchappayana Matha Temple – a temple with dancing sculptures and black-stone pillars, Aramane – a ruined palace, Nava Brindavana - tombs or Brundaavanas of nine Hindu Madhva saints, Ranganatha temple – a holy shrine dedicated to Lord Rama and Kamal Mahal – the edifice looks like syncretic.

Savor an appetizing lunch and head towards Kishkindha, the monkey kingdom of the Vanara King Sugriva – a notable character from the Hindu epic Ramayana. This is the place where Lord Rama met with Sugriva and Lord Hanuman. People throng the place because of its historical and religious significance. Spend your evening doing leisurely activities and shopping.

The wonderful Hampi Karnataka tour ends today. Post a hearty breakfast, complete the check-out formalities. You will have an assisted transfer to Bangalore and from there you will be transferred to the airport/railway station to board your homebound flight/train.