The weeklong ‘Journey to Ladakh’ allows you to explore two naturally furnished regions of Ladakh - Pangong Lake and Nubra Valley. Nubra Valley is a group of small villages with fertile and irrigated land. The existence of Buddhist monasteries can be truly attributed to its natives who are the followers of Buddhism at large.

Next on the list is the Pangong Lake which is a significant breeding ground for migratory birds such as Brahminy Ducks and Bar-headed Goose. Along with these two places, the 6 nights and 7 days tour package include several high passes and other attractions as well. Below is the day-wise description of the Journey to Ladakh tour itinerary for your kind perusal.

A land like no other with a superabundance of attractions to visit the dreamlike and marvelous landscapes, wonderful people and culture, Ladakh is truly a heaven on Earth. It is India’s Own Moonland. 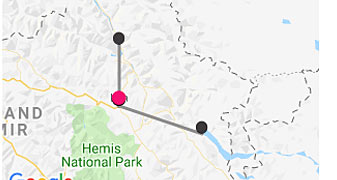 At the Delhi airport, board the flight to Leh. Arrive at the Kushok Bakula airport in Leh. The airport is situated at a height of 3500 meters. One of our tour representatives will greet you and help you to get transferred to your hotel. Complete the check-in formalities and get acclimatize to the high pressure and altitude of the place. Not many places in India are at once so traveler-friendly and yet so enthralling and hassle-free as mountain-framed Leh. Dotted with stupas and whitewashed houses, the Old Town is dominated by the steep rocky ridge topped by an imposing Tibetan-style palace and fort.

After breakfast, the Day 2 of the Journey to Ladakh tour will begin with a ride to the Alchi Monastery, situated in the west of Leh. Alchi Monastery is the oldest and witnesses a good footfall. The major buildings of the monastery are Dukhang or Assembly Hall, Main Temple (gTsug-lag-khang), Manjushri Temple ('Jam-dpal lHa-khang), and Chortens. Additionally, the monastery also has two other important temples -'Lotsabha Lakhang' and 'Lakhang Soma'. All these stunning architectures are adorned with minutely carved paintings, which are believed to be the oldest surviving in Ladakh. Gigantic statues of the Buddha and intricate wood carvings and artwork allure tourists the most.

On the way, drive through the Magnetic Hill, the small stretch of road that defies the phenomenon of gravity. And the reason is the pull of the magnetic hill that makes the stationary vehicles move upwards. Famous as the Magnetic Hill in Ladakh, it is the major tourist attraction in the valley and a perfect pit-stop for exhausted riders traveling on the highway. Bikers on their Ladakh Bike Trip often pass by this attraction to unveil the mysteries.

En route, you will also halt at the confluence of Rivers Zanskar and Indus in Nimu called as Sangam to click pictures. One of the most attractive wonders of nature in Ladakh is Sangam. Nestled between the spectacular mountains towering above the cold desert, there lies a vantage point. It is about 35 km from Leh near the village of Nimmu, on the Leh - Srinagar Highway.

Later, continue further to the monastery. After the visit to the monastery, on the way back to the hotel, halt to visit the Military Hall of Fame. It is a museum constructed by the Indian Army in memory of the brave Indian soldiers who laid down their lives defending the motherland. The Hall of Fame Museum, consisting of two stories, is divided into various sections which contain several displays.

After breakfast, drive to the Nubra Valley. On the way, you will visit Khardung La, the highest motorable pass in the world (5600 m). Khardung La will make you feel on the top of the world. The mountain pass has special importance since it is the route to carry supplies to the Siachen Glacier. It offers amazing visuals of the meandering roads up the mountain and the splendid valley.

The village of Hundur is where the Diskit Monastery stands. It is the farthest point till which tourists are allowed to venture in this part of Nubra Valley. As you will step on the rocky stairs towards the hilltop, it would lead you to the prayer hall of the monastery adorned by the statue of Maitreya Buddha, huge drums and several images of fierce guardian deities.

Afterward, head to the white sand dunes. These are the stunning white sand dunes of Hunder in the Nubra Valley region. Like an oasis amidst the cold desert, white Sand Dunes are beautiful beyond imagination. Located at an elevation of 4,000 meters, the desert is cut across by a calm stream and the stunning countryside. With such stunning landscapes against the backdrop of the snow-clad mountains, the Hunder Sand Dune looks nothing less than a fairy world. In the dunes, you will also enjoy the ride on a double-humped Camel (Bactrian camel).

Head back to the hotel and stay overnight.

The delightful tourist place is dotted with trees colored in red and yellow shades, colorful prayer flags, grey and golden mountains and clear blue sky. Inside this monastery, around 50 monks live. The monastery has an intrinsic design and comprises of two assembly halls and both have the murals, paintings of Buddha and other aspects of Buddhism.

Head back to Leh via Khardung La. In the evening explore the local markets of Leh, where you can shop for some of the wonderful wood carvings, Pashmina shawls, masks, pearls, handicrafts and more.

After the sumptuous breakfast, leave for an excursion to the Pangong Lake. The ever popular and the sparkling blue Pangong Lake is located approximately at the height of 4350 meters. A special feature of the lake is that it does not remain blue throughout the year or even the day, rather color changes from azure to light blue to green and grey too. Also called as Pangong Tso, it has been for a long time a tourist attraction and has become more popular after the shooting of the famous film '3 Idiots'. Apart from being an essential tourist destination for anyone traveling to Leh – Ladakh, the sublime beauty, crystal waters and gentle hills of Pangong Lake are an exceptional example of the landscape of the region. It is the beauty of the stunning blue waters that grabs the attention the most.

On the way, drive past the Chang La which is claimed to be the third-highest motorable mountain pass in the world. The Chang La is situated at an elevation of 5,360 meters above the sea level and is the main gateway to the Changthang Plateau. Continue towards the lake crossing Durbuk and Tangtse villages in the Changthang region.

Durbuk is a small village lying between Chang La and Tangste on the way to Pangong Tso. Here, you can experience the daily chores of the locals.

In the afternoon, arrive at the banks of Pangong Lake. Enjoy the enchanting sight of the lake by setting up tents. Also, get an insight into the local culture of the nearby village.

Stay overnight in the tents.

Day 6 will begin while soaking in the early morning tranquility of the lake. In the daylight, you can do some nature photography. After breakfast, drive back to Leh. On the way, you can halt at the Hemis Monastery. It is the most popular monastery and tourist attraction in Ladakh. It is the richest and the largest monastery in the area, enriched with a large number of Thangkas or paintings, which are exhibited during one of the famous festivals in Ladakh, Hemis Festival.

In the afternoon arrive in Leh. Check in at the hotel. After having lunch, rest for a while and indulge in shopping

After breakfast, leave for the Kushok Bakula International Airport and board your flight back to Delhi.