India is a country which is enclosed by the warmth of culture and traditions. These elements truly reflect on the diversity of the country. We can take you on one such culturally brimming experience with our Special Holi tour package. This 6 nights and 7 days itinerary begins from the national capital and covers the top destinations like Jaipur and Agra. One can say that the tour is similar to the famed Golden Triangle Tour India, and we would surely agree. The only difference is that you get to spend a little more time understanding the deep culture of every destination and also you will be able to relish the festival of colors, Holi. Don't overthink, just pack your bags as this Holi tour package is a great deal that you shouldn't miss out on. Further, you can also customize the package as per your preference. One can add Barsana or Vrindavan, as the joy of Holi is different at these places. 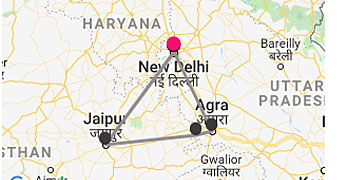 This is the day when you embark on the Special Holi tour. Upon your arrival at the Delhi International Airport, our representative will welcome and escort you to the hotel. The rest of the day is at your leisure. One can stroll around the vibrant streets of Kamla Nagar, Sarojini Nagar, Connaught Place, and Rajouri Garden and buy something for yourself. Dilli Haat is another option where one can visit and enjoy the ambiance of a traditional village fair. This place is a shopper's paradise and foodie's heaven. This market offers a plethora of traditional craft and handmade products. This is one of the best places to satiate your cravings.

Return to the hotel in the evening and have a sumptuous dinner. Enjoy the overnight stay in Delhi.

On day 2, start your day a delicious breakfast and get ready to enjoy a sightseeing tour of Old and New Delhi. Start the tour by exploring Jama Masjid, one of the largest mosques in India. This was the last architectural undertaking of Shah Jahan. Followed by a visit to the Red Fort, it was the main residence to the Mughal Emperors for more than 200 years. The monument is located in the heart of Delhi and is one of the most honored World Heritage Sites. Also visit Rajghat, a memorial dedicated to the Father of the Nation.

Later visit Humayun's Tomb, the first garden-tomb to be carved on the Indian subcontinent. This UNESCO World Heritage Site is the finest example of the Mughal architecture with the Persian influence. The next stopover will be the Qutub Minar, a 73-meter tall tower enlisted in the World Heritage sites. The astounding architecture which includes immaculate carvings and leaves you spellbound. Get glimpses of India Gate and Rashtrapati Bhawan (home to the President of India) on the way back. Guests can also spend some time in the soothing Sikh temple, Gurudwara Bangla Sahib. It is one of the most prominent religious places in Delhi.

Today you will proceed to the next astounding destination on the itinerary, Jaipur. As you reach there you will have an assisted check-in at the hotel. Take some rest and freshen up. In the afternoon, you will visit the textile printing place in Jaipur, which is famous for the beautiful Bandhani work. It is an art that involves dyeing a piece of fabric and producing a variety of patterns. The outfit comprises this work is very famous. Buy a few things for yourself from here and for your loved ones. Enjoy learning the techniques and history of this famous artwork. The evening is at your leisure. You can explore the nearby market and enjoy the majestic beauty of this vibrant and colorful city.

Rise and shine as this day is jam-packed with a tour to prismatic tourist attractions of Jaipur. The first stop is at Amer Fort. Settled some 11 km away from the Pink City, the fort finds its place in Amer town, the former capital of Jaipur state. Built-in the 1600s, this UNESCO World Heritage Site, is one of the most famous Hill Forts of Rajasthan. Enjoy an elephant ride to reach the marvelous fort and explore the fine architecture.

As the day progresses, make your way to the City Palace. This tourist attraction was built at the same time as the city it graces today. The architecture of the palace is an amalgamation of Rajput, Mughal and European architectural styles.

Thereafter, proceed towards Hawa Mahal, the red and pink sandstone wonder built-in 1799. It serves as an extension to the City Palace and grabs attention for its 953 latticework windows on the outside walls. The last tourist spot for the day is Jantar Mantar, an acknowledged UNESCO World Heritage Site. The monument features the largest stone sundial in the world along with 18 architectural astronomical instruments.

In the evening, join the Holika Dahan ceremony which celebrates the victory of good over evil. The festivity is also known as Chhoti Holi which is followed by Holi, the festival of colors and love.

After the day's excursion, return to the hotel for overnight stay.

It's time to get in the festive mood as on this day, as you are going to celebrate the Holi festival. It is one of the most revered festivals in India. What better place to relish every moment than Jaipur, where you will get to spend some time with locals. People decorate their homes with flowers and with the Rangoli. People celebrate this festival with enthusiasm and excitement. Govind Dev Ji Temple is one of the oldest temples in the city and Holi is celebrated with colors, flowers, and sandalwood powder here. One can take part in the Holi celebration here and enjoy the festivities with the locals. In this festival, people exchange sweets, apply herbals colors. Later you will have a delectable lunch. The rest of the day is free for leisure activities at your hotel.

Overnight stay at the hotel in Jaipur.

Start the day in a relaxed mood as the drive to Agra is scheduled in the afternoon. On your way, make a stop at Fatehpur Sikri. The Mughal City which translates to "City of Victory". It was founded as the capital of the Mughal Empire by Emperor Akbar in 1571. The city was named after the village 'Sikri', the place it took over. The main attractions you can visit here include the Tomb of Salim Chisti, Jama Masjid, Panch Mahal, Jodha Bai Palace, and other places. Another place of fame here is Buland Darwaza, the largest gateway in the world. This was built by Emperor Akbar to commemorate his victory over Gujarat.

After the exploration tour of Fatehpur Sikri, resume the ride. Upon your arrival at Agra, you will have an assisted check-in at the hotel. Relax for a while and then get ready to visit the charming ivory-white marble mausoleum, Taj Mahal. The UNESCO World Heritage Site was built as the tomb of Mumtaz Mahal, the consort of Shah Jahan. Marvel at the white marble made monument which is regarded as one of the Seven Wonders of the World.

After an amazing day, return to the hotel and have a delicious dinner.

Overnight stay at the hotel in Agra.

Today after breakfast visit the famous Agra Fort, a 15th-century fort which served as the residence of all the early Mughal emperors. It was Babur who first captured the city and started building the historical fort. The marvel changed hands with the Suri Dynasty and later Akbar who is the reason why the fort is built with red sandstone. This UNESCO World Heritage Site is situated on the opposite bank of River Yamuna as of Taj Mahal. One can get glimpses of Taj Mahal from here. Later, proceed towards the Marble inlay workshop where the labors have been working right from the Mughal period. One can buy souvenirs for their loved ones from here.

After some time, move back to the hotel to complete the checkout formalities, followed by a drive to Delhi. You will be escorted to the Delhi International Airport for the journey ahead.