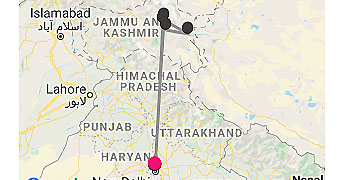 On your arrival at the Delhi International airport, our tour representative will welcome you and take you to your pre-booked hotel. After completing the check-in formalities, join the briefing session where you will be briefed about the tour in detail. The rest of the day is at your leisure. So you can explore Delhi on your own. Visit the famous heritage sites in Delhi such as Red Fort and Qutub Minar. Indulge in shopping and taste the Delhi street food or take a Rickshaw ride at Chandni Chowk.

Enjoy a night stay in Delhi.

Today you will get an early morning transfer to the airport to board your flight for Leh. On arrival, check-in at the pre-booked hotel in Leh. Take some rest and get refreshed. Later embark on a sightseeing tour in Leh. Visit the Leh Palace, the former royal residence of Leh and Hall of Fame, a museum housing weapons, history exhibits & a souvenir shop. The museum is built and maintained by the Indian Army. Also, visit the Shanti Stupa. The white-domed Buddhist Chorten is a popular religious site offering an amazing view of the surroundings. In the evening, you can explore the colorful Leh market.

Today after breakfast, you will head to Hemis Monastery. The richest and largest monastery in India conducts the popular Hemis Festival every year in June.

The main attraction of Hemis Festival Ladakh is the masked dance which is also known as Chham Dance. It symbolizes the victory of good over the bad. Apart from dance, get amused at the performance of sacred and spectacular plays during the festival. The lamas perform in colorful attire that grabs the attention of the viewers. Every mask carries a specific meaning associated with it. Generally, the senior monks wear long gowns, decorated masks, and headgear.

At the end of the performance, the Black Hat dancers destroy a sculpture made up of dough that represents the evil powers by their heads. This denotes to the destruction of the evil spirits. The broken pieces are then thrown in four different directions which indicates the purification of the soul after death.

During the festival, a local liquor, known as 'Chang' is served to the visitors. Beautiful handicrafts are showcased that adds charm to the famous festival of Ladakh. You can shop for souvenirs from these handicraft stalls.

A statue of Guru Padmasambhava as tall as a two-storied building is showcased in the festival. The statue known as Thangka is adorned with semi-precious gems, stones, and pearls. The whole Ladakh sink into spirituality and faith during the festival. Everybody performs with zeal to make the festival colorful and beautiful. This is the best opportunity to experience the culture of Leh. Soak in the sacred aura and colorful culture of Leh and head to the Shey Gompa and Thiksey Gompa.

Today after breakfast, pack your lunch and head out for an excursion to Pangong Lake at an altitude of 4350 meters. You will reach the place via Chang La, the third-highest motor road in the world at a height of 5360 meters. Enjoy the beautiful views of the snow-capped mountains from the lakeside. Spend a wonderful day in the lap of nature and back to your hotel in Leh.

On day 5 of the Hemis Festival and Leh Tour, you will go for an excursion to Khardung la. You will enjoy a scenic drive of 39 Km through the highest motor road. Once you reach the top, treat your eyes to the breathtaking scenery. Thereafter, back to your hotel in Leh. The rest of the day is at your leisure for doing the things of your choice.

Today is the last day of the tour. Get an assisted transfer to the airport to board a flight back to Delhi. On arrival in Delhi, board the flight for your onward journey.