The Grand Golf Tour is a well-planned tour that not only allows you to enjoy Golf games in India but also exploring the unique diversities of the country. India is the second country in the world to have Golf facilities. The gaining popularity of the golf and the world-class golf facilities being provided by the golf courses present in India work in making it one of the best golf holiday destinations. With the Golf courses spread across multiple terrains, the tour commences from Mumbai and continues to various destinations like Kolkata, Jaipur, and Agra and finally terminates in Delhi. 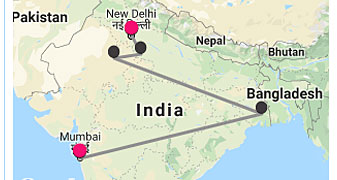 In the morning after arriving at the Mumbai airport meet our representative who'll escort you to one of our listed hotels. Check-in at the hotel to rest and relax in the cozy comforts of your room. In the Mumbai Arrive in Mumbai. In the evening you may take a leisurely walk to explore the nearby area. Later return to the hotel for a sumptuous dinner and a comfortable overnight stay.

The next day in the morning after enjoying a lavish breakfast, transfer to the Golf Club. On reaching the Golf Club enjoy the fusion of international experience with India expertise that make for some wonderful golf tours in India. The quality standards along with the accepted material work in making it a classic venue for enjoying the game of Golf. After enjoying the game of golf return to the hotel for lunch. In the afternoon set off for a sightseeing tour of Mumbai. The prime tourist attractions to visit in Mumbai include Gateway of India, Hanging Gardens, Elephanta Caves, Mahatma Gandhi Museum, etc.

The Gateway of India is an arch monument in Mumbai. It was built to commemorate the arrival of King George V and Queen Mary in India during 1911.

Elephanta Caves are a collection of cave temples dedicated to the Hindu God Shiva which is listed in the UNESCO world heritage sites.

In the evening return to the hotel for dinner and overnight stay.

On the following morning after breakfast, transfer to Mumbai airport to board a flight to Kolkata. On arriving at the Kolkata airport, meet our representative who'll escort you to one of our listed hotels. After straightening your backs for a while embark on a guided tour of Kolkata city. The major tourist attractions to visit in Kolkata include Indian Museum, Fort William, Victoria Memorial, Nicco Park, National Library and the Writer's Building. In the evening return to the hotel to enjoy a sumptuous dinner and overnight stay at the hotel.

The Indian Museum, also known as the Imperial Museum is the largest and oldest museum in India. Here you can explore rare collections of antiques, Mughal paintings, archeological discoveries, mummies, etc.

Sitting on the eastern banks of the Hooghly River, Fort William symbolizes the Bengal Presidency of British India.

Victoria Memorial is a white marble monument dedicated to Queen Victoria is now a museum that houses a rare collection of antique items from the Nawab and British era.

Nicco Park is a recreation site where you can enjoy various rides, water sports, and space theatre.

The biggest library in India the National Library holds the public record of art and houses rare collections of ancient and modern books.

Writer's Building is the seat of the State Government of West Bengal. It is located in BBD Bagh named after three freedom fighters Govt Binoy, Badol and Dinesh.

Today the day is reserved for enjoying the professional golf tour of India at the Tollygunge Golf Club. Post breakfast, get transferred to the Tollygunge Golf Club. Explore the golf club for its various facilities and world-class standards. This 18-hole golf course is spread over an area of 100 acres and is designed by the internationally reputed golf architects. Located in the urban area of Kolkata the golf course appears as an oasis of green. The floodlit facilities available allow provides players with an opportunity to hone their skills even after the sun has gone down. In the evening return to the hotel for dinner and overnight stay.

Early morning after enjoying a lip-smacking breakfast at the hotel, get transferred to Kolkata airport to board a flight to Jaipur. On reaching Jaipur, get accommodated at one of our listed hotels. Spend the rest of the day resting and relaxing in the cozy comforts of your hotel room. In the evening you may take a leisurely walk to explore the colorful bazaars of Jaipur. Later return to the hotel for enjoying a lavish dinner and a comfortable overnight stay at the hotel.

Next morning post breakfast, transfer to Jaipur Golf Club. The Golf courses present in Jaipur have previously been the former residence of Maharajas. The golf courses have various facilities like clubhouse, changing rooms, practice area, and caddies, etc. that make for excellent Indian golf tour. Previously these grounds have been famous for pool activities. After enjoying a game of golf set off for a sightseeing tour of Jaipur. The prime tourist attractions to visit in Jaipur include Hawa Mahal, Amber Fort, City Palace, Royal observatory and Jal Mahal. Enjoy a lavish lunch at any of the city hotels. After lunch head to visit the other major tourist attractions like Nahargarh Fort, Jaigarh Fort, and Albert Hall Museum. In the evening return to the hotel for dinner and overnight stay.

On the 7th day of the tour post breakfast drive straight to Agra. En-route visit Fatehpur Sikri, the first planned city of the Mughals. The city was built by Emperor Akbar to commemorate the birth of his son. The major tourist attraction to visit in Fathepur Sikri includes Diwan-i-Aam, Diwan-i-Khas, and the famous Buland Darwaza. After the visit resume drive to Agra. On reaching Agra, get accommodated at one of our listed hotels.

Fathepur Sikri was established by the Emperor Akbar which was the Mughal capital before shifting to Agra. Buland Darwaza is the highest gateway in the world that was built as a symbol of victory by Akbar after winning over Gujarat.

Later in the day, you may visit the prime tourist attractions present in Agra including Agra Fort, Taj Mahal, Panch Mahal, Mehtab Bagh, and Guru Ka Tal. In the evening you may take a leisurely walk to explore the nearby area.

Taj Mahal is regarded as the most beautiful white marble monument in the world. This world heritage site is one of the seven wonders in the world. Dinner and overnight stay at the hotel.

On the 8th day of the golf holidays in India, leave for Delhi after breakfast. On the way halt at Sikandra to visit the tomb of the great Mughal Emperor Akbar. The majestic structure of the mausoleum exhibits the unique blend of Islamic, Buddhist, Christian and Hindu architecture. After the visit, continue to drive to Delhi. As you reach Delhi get accommodated at one of our listed hotels. Spend the rest of the day resting and relaxing in the cozy comforts of your hotel room. Dinner and overnight stay at the hotel.

Your golf tour packages include playing golf at one of the oldest golf courses in India. Today morning after breakfast, transfer to the famous Delhi Golf Club. It is one of the oldest golf-courses present in Asia. The structure was created in 1920 and was named the Lodhi Club which on 24 February 1950 was renamed as the Delhi Golf Club. The vast landscapes of the golf course are dotted with large variety of trees and flowering shrubs. One can also enjoy the sight of more than 300 hundred species of birds, mongoose, squirrels, and monkeys. This golf course forms an important part of the Asian Gold Circuit for the Indian Opens and national amateur championship. The layout of Delhi Golf Club is such that it is both a pleasure for the beginners and a challenge for a good golfer.

The non-players, on the other hand, can set off for a sightseeing tour of Delhi covering Qutab Minar, Humayun's Tomb, India Gate, Lotus Temple, Red Fort, Raj Ghat, Akshardham Temple and Jama Masjid. Enjoy lunch at one of the city hotels. In the evening revisit the Red Fort to attend an impressive light and show. Red Fort is a red stone made fort that used to be the royal residence of the Mughals. Return to the hotel for dinner and overnight stay.

In the morning after breakfast, transfer to Delhi airport to board a flight for your onward destination.