The Golden Triangle with Rajasthan tour takes you on a 10-day & 9-night royal journey to splendid North Indian cities and Rajasthan. The tour covers Delhi, Agra, Jaipur, Samode, and Mandawa. The itinerary comprises a visit to historic monuments, majestic palaces, forts, and Havelis.

Explore the remnants of cities and dynasties in Delhi. Agra is the ode to amazing Mughal architecture with Taj Mahal and Agra Fort to explore. Jaipur has royal fascinations of forts, Havelis, gardens, etc. Samode and Mandawa are the royal cities of Rajasthan with marvelous palaces and Havelis offering a glimpse into the bygone era of Rajput maharajas.

Rajputana era was an age characterized by opulence, elegance, and romance. With our meticulously crafted Rajasthan Golden Triangle tour itinerary, embark on an odyssey to rediscover the charm and grandeur of the yesteryears. 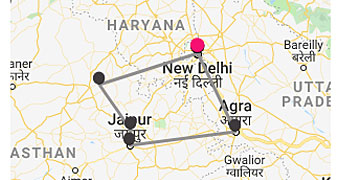 As you reach Delhi airport, our representative will meet you and escort you to the listed hotel. Be welcomed with traditional Indian rituals. A guest is welcomed like God in India. Ladies dressed in customary Indian attire will perform the auspicious rites. Check-in at the hotel and relax for the day. In the evening, explore the vivacious nightlife of Delhi or enjoy leisurely walks.

The 2nd day of the Classic Rajasthan tour takes you on an excursion in Delhi. The major tourist attractions you will visit are Birla Mandir, Qutub Minar, Red Fort, India Gate, Jama Masjid and President's House. So, start by visiting the Birla Mandir also known as Lakshmi Narayan Temple located at the heart of the city. Next, visit the Qutub Minar, a 73-meter tall tower which is also a UNESCO World Heritage Site. From here, you will head to the President's House or Rashtrapati Bhavan. The H-shaped mansion which was imagined by Sir Edwin Lutyens has a total of 340 rooms spread over four floors, 2.5 kilometers of corridors and 190 acres of garden area.

Post exploration, you will move to Connaught Place. Have your lunch at one of the many restaurants and rest for a while. After lunch, you will visit India Gate, a war memorial built in the memory of the First World War martyrs. Your next stop is Jama Masjid, one of the largest mosques in India built during the Mughal era. The Delhi city tour will end at Red Fort while attending wonderful 'Light & Sound Show' explaining various historical moments of the Mughal Dynasty.

Return for an overnight stay at the hotel.

After a healthy breakfast, leave for Agra by road. On reaching Agra, you will be escorted to check-in at one of our listed hotels. Later in the day, visit the Itimad-Ud-Daulah's Tomb which is also referred to as 'Baccha Taj' or mini Taj Mahal due to its resemblance with the iconic Taj Mahal. This site offers interesting insight into Mughal architecture. Another must-visit marvel is the Agra Fort, which lures crowds with its amazing style of construction. In the evening, make a stop at the Oswal Emporium the famous marble handicraft showroom in Agra. Attend the free light and sound show depicting the eras of Taj Mahal.

Post breakfast, embark on a visit to one of the Seven Wonders of the World, the Taj Mahal. The epitome of love is a vision in white marble settled on the banks of River Yamuna. The world's most-loved icon exudes breathtaking beauty. The Mughal emperor Shah Jahan commissioned the building in the memory of his wife Mumtaz Mahal. 20,000 workers worked for 20 years to build this wonderful white marble monument.

In the evening visit the local markets in Agra where you will find everything including jewelry, clothing and wooden showpieces.

Start the 5th-day of your Delhi Agra Jaipur tour with an appetizing breakfast, after which you will depart for Jaipur via Fatehpur Sikri. The abandoned Mughal city has plenty of places to explore like Jodha Bai Palace, Salim Chisti's Tomb, Jama Masjid, Panch Mahal, etc. This UNESCO World Heritage Site was the capital of the Mughal Empire for only a decade before the royal abode shifted to Agra and then to Delhi. Jodha Bai Palace reflects a blended architectural style of the Hindu and the Mughal. Another architectural marvel you can explore in Fatehpur Sikri is Panch Mahal, a five-storied structure open on all sides and built from red sandstone. After exploring the ancient Mughal city start again for Jaipur.

Upon arrival in the 'Pink City', check-in at one of our enlisted hotels. After taking some rest, explore the major tourist attractions of the city. The Jal Mahal, Jaigarh Fort, Central Museum and Birla Mandir are some places you can visit. Spend some time away from the chaos of Jaipur city in the serene environment of Jal Mahal. Once a shooting lodge for the Rajput kings, Jal Mahal creates an amazing view when reflected on the azure water of Sagal Lake. Next, visit Jaigarh Fort which is also known as Victory Fort and resembles the design of Amber Fort. The fort built by King Jai Singh II is situated on 'Cheel ka Teela' or 'Hill of Eagles', a highland on the Aravalli Range. Your next stop is the Central Museum. Known as the pride of Jaipur, the museum is housed in Albert Hall that exhibits statues paintings, musical instruments, and an Egyptian mummy. Admire the blend of English and North Indian architecture of the building designed by Sir Swinton Jacob.

Thereafter, spend some time amidst the spiritual aura of Birla Mandir, a beautiful shrine dedicated to Lord Narayan and his consort, Goddess Lakshmi. The evening is kept free for your leisure. Spend time browsing the markets or relaxing at the hotel.

Return for an overnight stay at the hotel.

On the next day after hearty breakfast at the hotel, get ready for an excursion to the Amber Fort. The fort is situated in the top of a hill and casts a wonderful reflection in the Maota Lake. Reach the fort taking the exciting joy ride on an elephant. The afternoon is reserved for the city tour including City Palace along with the Royal Observatory and Hawa Mahal. Admire the wonderful Hindu and Mughal architectural blend of the City Palace. Wander across the beautiful garden and explore the edifices within the palace complex.

Next, visit Jantar Mantar or the royal observatory, where you will see a collection of astronomical instruments. Hawa Mahal is an enjoyable place which is your next stop. There are 953 windows on the outer wall of the palace that gives it a honeycomb-like shape. You can watch the streets through the windows as the royal Rajput women used to do.

After the day's excursion, return to the hotel for an overnight stay.

The next morning after you are done with breakfast, leave for Samode. Known for small villages, beautiful Havelis and forts, Samode offers an intriguing insight into the era of royalty. Check out the major tourist attractions which include the Fort of Sheograh and the Samode Bagh. This is the oldest Mughal garden in Rajasthan designed in the traditional Char Bagh style. A tour of Rajasthan will not be complete unless you ride a camel. So, embark on a camel's back in the day and explore the surrounding countryside.

In the evening, if time permits grab an opportunity to explore Shekhawati village. This village is famous for majestic Havelis with murals and wall paintings. It is one of the interesting living art galleries in the world.

The next morning after breakfast, proceed to Mandawa. A beautiful town in Rajasthan is known for its gorgeous Havelis and forts. After you reach Mandawa, check-in at the hotel. Relax for a while, after which you will be taken for an excursion to the magnificent Havelis in the town. The intricately painted walls and the detailed work will captivate you. Do not miss Jhunjhunwala Haveli, Hanuman Prasad Goenka Haveli, Gulab Rai Ladia Haveli, Goenka Double Haveli, Murmuria Haveli, etc.

On the next day after breakfast, proceed for your drive back to Delhi. As you reach, check-in at one of our listed hotels. The day is to be spent at leisure.

Relax and rest in your hotel's room overnight.

After breakfast, get ready for a visit to the Humayun's Tomb. This is the first garden-tomb on the Indian subcontinent where emperor Humayun was laid down to rest. To make your Rajasthan travel package memorable, a gala farewell dinner is organized at a farm on the outskirts of the capital. Enjoy the poolside party. Post dinner, avail the transfer to the Delhi airport. Board the flight for your onward destination with fond memories of the Maharaja retreat in India.