India's golden triangle is a circuit which connects to the national capital New Delhi, Agra and Jaipur. A lot of the travelers are aware of the Golden Triangle India tour package and why it is so called? It is because of the triangular shape formed by the locations of New Delhi, Agra and Jaipur on a map. The 6-day Golden Triangle India Tour begins from Delhi and the moves southwards to the site of Taj Mahal at Agra. The trip then proceeds to the west, in the desert landscapes of Jaipur. The itinerary of the Golden Triangle provides a wide range of spectrum of the country's different landscapes. What’s more fascinating is that it also gives an insight into the rich heritage of the British, the Rajput and the Mughal culture altogether. The circuit spread across the length of about 720 km by road. Each city is about 4 to 6 hours of drive from the other and offers cheerful experiences. 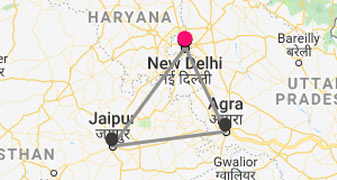 The golden triangle India Tour will begin as you arrive at the Delhi Airport or the Railway station. From there you will be accompanied by the representative. The Golden Triangle Tour of 5 Days. He/she will be holding a board with the guest name written on it. You will be meeting & greeting him and then you will be taken to the hotel.

Stay Overnight at the hotel.

After the breakfast, the city tour of New Delhi & Old Delhi will commence which covers the sites like Birla Temple - Also known as the Laxmi Narayan temple, a large extent is dedicated to the Lord and Parliament House - Located in New Delhi, it is also known as the Sansad Bhawan. It contains Lok Sabha and Rajya Sabha. From there, you head towards India Gate, a war memorial dedicated to 70,000 soldiers of the British Indian Army on the Raj Path. Later on, take a tour of Red Fort, the historic fort which was the residence of the Mughal emperors for nearly 200 years.

The trip then continues to Jama Masjid, one of the largest mosques in India built by Emperor Shah Jahan. Next on the list is Humayun's Tomb, the site is the where the Mughal emperor Humayun was laid to rest after his death also known as Maqbara-I Humayun. Afterward, proceed towards the Gandhi Memorial, a beautiful, well-maintained garden. You have to remove your foot ware to go near the tomb.

Visit Qutub Minar, the UNESCO World Heritage forms a part of the Qutub complex in Delhi. It is a 73-meter-tall five storied tapering tower. Take a tour of Chandni Chowk, one of the main and oldest markets of the Delhi. You will have to walk or commute by cycle rickshaw in the narrow lanes of the market.

Then return to the hotel for overnight stay.

After the breakfast, drive from Delhi to Agra. Check into the hotel as you arrive in Agra. Later in the day take a tour of the Agra city. Visit the Agra Fort – a massive fort and a UNESCO World Heritage Site. This is followed by a visit to the Tomb of Itimad-Ud-Daulah – an architectural wonder constructed by a daughter for her father. Next, you will be marveling at the symbol of Love- the Taj Mahal.

Stay Overnight at the hotel.

In the morning, head to Jaipur and on the way visit Fatehpur Sikri - Akbar's old capital. There you will visit the Jama Masjid – one of the largest mosques in the country, the palace of Jodha Bai – a palace with lots of stories associated with it. Next, move on towards the Birbal Bhawan – an architectural wonder and also visit Panch Mahal – an outstanding monument. Marvel at the Buland Darwaza – world's largest entrance gate. Also, pay homage at the shrine of Sheik Salim Chisti. On arrival in Jaipur check into the hotel.

Day 5 : Tour of the Jaipur city

After the breakfast at the hotel, head for the day trip to Amber Fort on the outskirts of Jaipur. Enjoy the elephant ride which is an optional ascent to the fort. Amber Fort is a classic romantic place in Rajasthan. Its construction began in 1592 and it was started by Man Singh I.

Later in the day, there will be a visit to Jal Mahal – a mesmerizing palace built amidst weather and City Palace Museum – a spellbinding museum displaying various artifacts. Subsequently, head towards Jantar Mantar Observatory and the Haveli of Nawab Shaeb. For the rest of the day, you will be shopping at the local bazaars.

After the sightseeing, relax in the hotel and enjoy an overnight stay.

Day 6 : Jaipur to Delhi - Completion of the Tour

Check out of the hotel and head to the Jaipur or Delhi airport / Railway station for your journey back. The Golden Triangle India itinerary is completed with the best memories of your life.