The forts and palaces built by the erstwhile Rajputana rulers of Rajasthan have always been alluring and majestic. Spanning for over a period of 7 nights and 8 days, this well-planned itinerary of Golden Triangle tour with Udaipur takes you to famous forts and palaces. The tour also includes a city tour of Delhi, Agra, Jaipur, and Udaipur. Some of the highlights are visiting the World Heritage Sites like Qutub Minar and Humayun’s Tomb, exploring the magnificent Taj Mahal, savoring special dinner at Chokhi Dhani village near Jaipur and a boat ride on Lake Pichola. So, plan this trip and get ready to explore the classical forts and palaces in India. 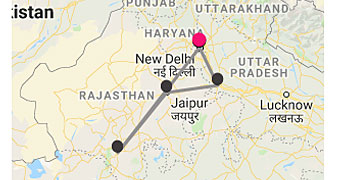 On your late evening arrival at the Delhi Airport/Railway Station, our tour representative will help you with an assisted transfer to the hotel. After completing the check-in formalities you can take rest in the hotel or go out to get a first-hand experience of the Delhi nightlife. You will easily find a Dhaba or restaurant nearby. Delhi is the center where the different ethnicity and diverse culture of India come together in one place. By taking a walk around the streets you can savor different tastes and enjoy varied cultures of India.

Enjoy overnight stay at the hotel.

After breakfast, get ready for the city tour of Old and New Delhi. The guided tour includes attractions like Red Fort and Jama Masjid. Jama Masjid is one of the largest mosques in India built by the Mughals. This mosque made up of red sandstone can accommodate 25000 devotees in its courtyard. Situated within a kilometer of Jama masjid is the iconic Red Fort where the hosting of the tricolor flag takes on the 15th of August every year. After exploring this historic fort, go for a rickshaw ride in Chandni Chowk. After enjoying the rickshaw ride, you will head to Connaught Place. Keep your taste bud ready for a yummy experience.

After having lunch at a popular restaurant, the second part of the city tour starts. In the second part, explore popular attractions like Diplomatic Enclave, President's House, India Gate, Humayun's Tomb, and Qutub Minar. Our first stop is Chanakyapuri where the Diplomatic Enclave was established in 1950. The place is named after Chanakya, the great Indian teacher, philosopher, economist, and royal advisor of the 3rd-century. The houses of the foreign embassies are located here in the Diplomatic Enclave. Next, we will visit the President's House or Rashtrapati Bhavan located on the Raisina Hills. This vast mansion is the official residence of the president of India and features a breathtaking architecture designed by the British architect Edwin Landseer Lutyens.

From President's House, you will head to the India Gate, a war memorial that resembles the look of the Arc de Triomphe in Paris. Your next destination is Humayun's Tomb, the first garden-tomb of India which was built as a burial chamber for emperor Humayun. The last stop of the day is Qutub Minar, a 73-meter tall tower which is also a UNESCO World Heritage Site.

After the city tour, come back to the hotel for an overnight stay.

Post breakfast, start your journey to the Mughal City Agra by road. On the way, stop to visit, the mausoleum of the Mughal Emperor Akbar at Sikandra. The structure was commissioned by Akbar himself while he was alive. Continue to Agra.

On arrival, check-in at the hotel and have lunch. The evening is scheduled for a visit to the Taj Mahal, one of the Seven Wonders of the World. Marvel at the white marble monument that was built by 20000 workers in 20 years. In the evening, attend a specially scheduled folk performance and puppet show.

After a delicious breakfast, leave the hotel for a city tour of Agra. Visit the magnificent Agra Fort. This fort is a fine example of Mughal beauty and was the royal residence before the capital was shifted to Delhi in 1638. After exploring the fort, you will leave for Jaipur.

On the way, explore the World Heritage Site of Fatehpur Sikri. The place showcases the Mughal grandeur at its best. Here you can visit Jodha Bai Palace, Panch Mahal, Buland Darwaza, etc. From Fatehpur Sikri, you will continue your journey to Jaipur with a halt at Laxmi Vilas Palace in Bharatpur for lunch.

On arrival at Jaipur, check-in at the hotel and take rest. The rest of the day is at your leisure. The evening would be special and is reserved for cultural performance, camel ride and traditional food. Special dinner is planned at Chokhi Dhani, an ethnic village resort.

After the enjoyment in the evening, come back to the hotel for an overnight stay.

After breakfast, get ready for the forts and palaces tour of Jaipur. The first visit is to the hill fort of the Amber. Take a jeep ride or an elephant ride up to the entrance of the fort and enjoy the panoramic view of the city from here. Constructed during the reign of Raja Man Singh I, the complex houses several splendid structures.

After visiting the Amber Fort have your lunch and continue sightseeing to the City Palace, Hawa Mahal, Jantar Mantar, and Costume Museum.

At Costume Museum, view wonderful local handicrafts and dress materials such as Jama, Gota, Kimkhambs, Bandhej, Zari, etc. Next in line is the world heritage site of Jantar Mantar. This is an astronomical observatory that houses instruments to measure universal synchronization. Next, you will visit the City Palace. This splendid structure reflects the Mughal and Rajput architecture. Walk in the vast garden and visit the edifices within the palace complex.

Lastly, visit the Hawa Mahal, popular for its beehive like structure. This beautiful palace was commissioned by Maharaja Sawai Jai Singh II as a chamber for women or Zenana. In the evening, savor an exclusive dinner at Raj Palace.

Come back to the hotel for an overnight stay.

On day 6 of Golden Triangle with Udaipur tour, relish an early morning breakfast. Thereafter, get an assisted transfer to Jaipur airport to board a flight to Udaipur. Upon arrival, get transferred to a hotel. Later on, leave for the city tour.

Explore the beautiful City Palace nestled on the banks of Lake Pichola. This complex is quite popular for its capacious rooms with ivory doors, expansive marbled balconies, peacock courtyard, and mirrored walls. Visit the beautiful Jag Mandir Palace, which is an island palace constructed amid the Lake. Next in line is the old Jagdish temple, known to be around 300 years old and finally the Royal Cenotaphs of the Rajputana rulers.

In the evening, enjoy a boat ride on Lake Pichola. This is a famous tourist attraction. Enjoy the sunset from the deck and look at the surroundings that include the palace, temple, restaurants, etc. At night, savor a special dinner at Taj Lake Palace or Durbar Hall.

After breakfast, the day is at leisure. Later on, get transferred to the Udaipur Airport for boarding a flight to Delhi. On arrival, you can visit the popular markets in Delhi to enjoy some last-minute shopping. In the evening, attend a farewell dinner accompanied by a cultural performance.

Come back to the hotel for an overnight stay.

Today is the last day of your Golden Triangle with Udaipur tour package. Board train/flight for your onward journey.