Embark on this wildlife tour to India that presents an eclectic mix of destinations from North and Central India. The Golden Triangle and tiger tour package is an endeavor to acquaint guests with the royal and cultural heritage of India as well as provides opportunity to experience the thrill and excitement of touring Central India’s popular wildlife sanctuaries- Kanha and Bandhavgarh- each of which is widely frequented for its diverse wildlife especially tigers. 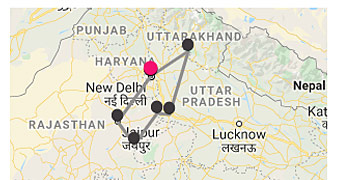 Arrive in Delhi and meet our tour representative who will comfortably escort you to the hotel. Delhi, the national capital of India, is one of the oldest cities in India. The vast heritage and diverse culture of Delhi are largely credited to its glorious past when many dynasties have risen to power and vanished to dust over the centuries. The city is divided into two parts- Old Delhi and New Delhi. Whereas Old Delhi bears testimony of the Mughal legacies, New Delhi speaks volumes about the British influence evident in its colonial buildings.

In the morning, embark on a sightseeing tour of Delhi covering monuments like Red Fort, the seat of Emperor Shah Jahan, Jama Masjid, World's largest mosque, Raj Ghat, the memorial of Mahatma Gandhi, Parliament House and Lotus Temple as well as partake in a rickshaw ride in the bustling alleys of Chandani Chowk.

Post sightseeing, return to your hotel for a night stay.

Early morning, trail the route to Jaipur, the famous pink city of Rajasthan.

Jaipur, the largest and the capital city of Rajasthan, earned the reputation of the pink city long back in the 18th century when maharaja of Jaipur ordered to paint it with terra-cotta pink color to welcome the arrival of King Edward. Various forts and palaces that dot the length and breadth of Jaipur exemplify a seamless blend of Hindu, Mughal and British architecture. Jaipur houses various exquisite monuments such as Amer Fort, City Palace, Jal Mahal, Hawa Mahal as well as gardens and temples which adds up to the aestheticism and tranquility of this city. Besides monuments, there are various traditional markets studded with exquisite handicrafts and souvenir items.

On reaching Jaipur, you'll be escorted to the hotel. You may either relax in the hotel or choose to explore the local markets of Jaipur.

Early morning, enjoy an elephant ride to Amber Fort. Feel the royal pomp of riding on an elephant while climbing to the entrance of the fort from the base. Post sightseeing in Amber Fort, return to the city for exploring other attractions which include Jantar Mantar, a royal observatory which houses 14 geometrical instruments to validate astronomical observations, City Palace, which houses the former royal family of Jaipur and a museum which puts on display the antique collection of arts, carpets, and artifacts. Also, halt at Hawa Mahal for a photo session.

In the evening, proceed on a walking tour to the local markets to purchase for traditional Rajasthani jewelry and other handicraft items.

Post shopping tour, return to the hotel for overnight stay.

Post a leisurely breakfast, travel down to Agra. En route, halt at Fatehpur Sikri. This ghost town was built by Mughal Emperor Akbar as his new capital but was abandoned 10 years after its construction due to the threats of enemy attacks.

Post sightseeing in Fatehpur Sikri, continue your trip till you reach Agra.

Agra, the city of Taj, is a repertoire of Mughal art and architecture. Sprinkled across this city are stunning mausoleums and monuments that speak volumes about the penchant of Mughal rulers towards art. Taj Mahal, one of the Seven Wonders of the World, stands as testimony to the immortal love of Shahjahan and Mumtaz Mahal.

On arrival in Agra, check into the hotel. Retire in your room for the rest of the day.

Early morning, embark on a city trip to explore Agra. Feast upon the morning views of Taj Mahal, a monument whose beauty has no par. At the time of the construction of this monument, Shahjahan would have never thought that his ode to Mumtaz Mahal would be admired as the symbol of immortal love.

In the afternoon, visit Agra Fort, a red-sandstone citadel that has seen the rule of various Mughal rulers until Shahjahan moved to Delhi followed by a visit Id-Mat-Ud-Daulah tomb, the mausoleum of Ghiyas-ud-din Beg built by his daughter Empress Nur Jahan.

In the evening, you'll be transferred to the railway station to board a train to Katni.

Overnight journey aboard the train.

Upon your arrival at the train station, you will head straight to Bandhavgarh.

Bandhavgarh National Park, situated in the Umaria district of Madhya Pradesh, is a renowned tiger reserve in India. It is a national park with the highest density of tigers who are the descendants of tigress Sita, the most photographed tiger in the world. Besides tiger, the park is home to a variety of faunal and avifaunal species such as Indian bison, leopard, wild boar, Sambhar, sloth bear, Grey Hornbill, Pond Heron, Dark Black Crow, Pied Kingfisher, and Laughing Dove.

Upon arrival in Bandhavgarh, check into the hotel.

Embark on a safari trip to catch the afternoon mood of the jungle. Return to the hotel after a thrilling game safari.

Partake in the full-day adventure of wildlife rendezvous at Bandhavgarh. Explore the spectacular flora and fauna of this national park throughout the day.

Post a leisurely breakfast, you will head towards the next wildlife destination- Kanha.

One of India's finest tiger reserves, Kanha National Park is widely known for its connection with "The Jungle Book" and Rudyard Kipling. It is not just known for its amazing wildlife but is also famous for Bamni Dadar, the sunset point of Kanha. Although the park houses rich and diverse species of fauna and avifauna, it is the sight of a tiger that forms the crescendo of the day. Besides tigers, other major animal species of this park are Indian bison, leopards, spotted deer, and wild boar.

On arrival in Kanha, check into the hotel. Spend the rest of the day by exploring the wildlife in an open-top jeep.

Prepare yourself for a full day tryst with the rich wildlife of Kanha right from animals to birds, each of whom has their origin in this park. Post safari trip, unwind yourself in the resort.

Enjoy a safari trip in the morning followed by transfer to the Nagpur airport to board a flight to Delhi.

Upon arrival In Delhi, you will be greeted and escorted to the international airport to board flight for onward journey.