Delhi, the capital of India, is a must-visit for everyone. One of the most beautiful capitals in the world, it is steeped in history, architecture and heritage. The Delhi Agra Tour is a discovery of India, highlighting the very framework of the country, its deep history and culture. The temples, monuments, forts and gardens are a testament to the fact that India is a beautiful blend of diverse faiths and people.

On the one hand, our Delhi Agra tour package encompasses India’s manifold history; from ancient Hindu temples to Baha’i intellection, Mughal rule and British Raj and on the other hand to contemporary flavors of fashion and state-of-the-art ziggurats. Delhi has it all!

Our comprehensive Delhi Agra Tour includes an excursion to Akshardham Temple, Baha’I Temple and Laxminarayan Temple. It further takes you to the historical monuments like Qutub Minar, Humayun's Tomb, Red Fort and more. A well-planned trip to Agra's Taj Mahal and its environs is an added plus. Do your shopping at Delhi's markets, view awe-inspiring Rashtrapati Bhavan and pay homage to the Indian soldiers and leaders at their respective memorials.

So pack your bags and arrive at Delhi and be whisked away to the paradise that is Agra. You will surely go back with everlasting memories after a fun-filled trip. 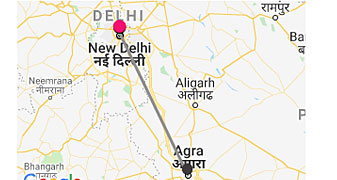 On your arrival in Delhi, you will be graciously received by our company's representative. She/he will assist you to your chosen hotel for a quick refreshing stopover. Your Delhi Agra tour will start with a quick tour around Delhi city exploring the main attractions.

Our first stop will be the historic Red Fort or 'Lal Quila' in Old Delhi. Lal Quila is the most iconic landmark in Delhi. It is a reminder of the grand Mughal period. The historic fort stands a witness to the changing scenarios in India's history. This UNESCO World Heritage Site was built by Shah Jahan in 1638 when he shifted his capital to Delhi, then known as Shahjahanabad. It is situated on the banks of the Yamuna River which once fed the moats of the fort. On Independence Day every year, the Prime Minister of India unfurls the National Flag and addresses the Nation from its famous ramparts.

After a stroll through the monumental ramparts and galleries, visit the famous Jama Masjid just across the road. It is the country's largest mosque. Another work of architectural splendor by Shah Jahan, built-in 1656, this place of worship boasts of 4 towers and 2 minarets that are 40 meters high. The mosque can accommodate 25000 worshippers simultaneously.

Now is the time for some fun and amusement! The Kingdom of Dreams awaits you for a fun-filled afternoon, full-on entertainment and colorful culture and heritage extravaganza. The Kingdom of Dreams is an amazing haven of imagination. There are two major live shows Zangoora and Jhumroo. Zangoora is a breathtaking musical show which is presented live once a day. Similarly, Jhumroo is a musical comedy played out by seasoned artists. You may also explore Culture Gully. It is a multistate thematic Mall. The puppet shows, street performances, music and dance performances, carnivals, food courts and shops will mesmerize you. The food is a little expensive but the ambiance and décor are simply stupefying.

Shop till you drop and you will be returned to your hotel for a well-deserved night rest.

Make sure you have a sumptuous breakfast for this activity-filled day. Get ready for some sightseeing and visit Delhi's main temple namely Akshardham and Lotus temple.

Standing majestic and exquisitely beautiful, Akshardham is dedicated to Bhagwan Swaminayaran and is of unconstrained bliss. The expansive grounds are unbelievably beautiful. The main temple at the center comprises of intricate carved pillars, sculptures and steps leading up to the domed interior with the idol of Swaminarayan under an ornate domed canopy. The building is made of sandstone and marble surrounded by sylvan gardens. The Sahaj Anand multimedia water show with its musical fountain and an arena in the form of a step-well is on every evening after sundown. It features a lovely mythological story from the Kena Upanishad in a 24-minute program. Being a temple of worship, a mandatory dress code requires you to cover your shoulders and upper arms and legs till below the knees. The Mandir remains closed on Mondays.

One of the 7 temples in the world, based on the Baha'i concept, the Lotus temple, as the name indicates, is conceived in the form of a 72 petal lotus. It is made of pristine white marble. There is no idol or sanctum within. There is a huge hall where people of any faith can sit in utter silence and meditate on their respective divinities.

After your auspicious start of the day, you will be taken straight to Agra. You will reach Agra by late evening. The rest of the day is at leisure. Take a slow walk through the souvenir shops of the famous artisans of Agra or buy the famous Petha sweet.

The evening will bring you to Agra, the original capital of Shah Jahan and the place where he erected the famous Taj Mahal. It is famous for a sweet made of a white pumpkin called Petha. There are shops lining the main thoroughfare, selling marble souvenirs made in the same embedded style as that of the Taj Mahal. You can also buy miniatures of the Taj Mahal.

Day 3 of the Delhi Agra tour is a special day as we begin it early with an unbelievable vision of the Taj Mahal (UNESCO World Heritage Site) during sunrise.

Forever beautiful, the Taj Mahal looks stunning any time of day. Glistening in the moonlight or shimmering in the sun, it is a vision to behold. Dawn casts a pinkish glow on the flawless marble – don't miss it! Poised above the River Yamuna, this one of the Seven Wonders of the World was built by Shah Jahan in memory of his beautiful wife Mumtaz Mahal. Intricate marble inlay work, like flowers or Islamic verses, embedded with semi-precious stones, adorn the entrances and interiors of the main mausoleum. The symmetry of the structure is amazing. It would be advisable to click memorable photographs here.

Spend bewitching hours at the famous monument of love and we will be ready to take you to Agra Fort followed by Fatehpur Sikri.

The 16th-century Agra Fort owes its existence to Emperor Akbar who built up an existing fort called Badalgarh of the Rajput Kings. This was the first fortification of the Mughals and is built of red sandstone. The fort has witnessed several invasions and raids. Seizure by the British troops caused severe damage to the main fort. Nevertheless, the mosques, palaces and some of the towers have withstood the ravages and are still breathtaking. The huge fort rampart is almost 70 ft. high and is surrounded by another outer wall built later by Aurangzeb surrounding a moat. This is the fort where Aurangzeb imprisoned Shah Jahan to take the throne. There is an ornate hexagonal tower, Musamman Burj, from where Shah Jahan would gaze at his Taj Mahal.

Once upon a time, Fatehpur Sikri were two flourishing twin cities that were founded by Emperor Akbar in 1571. But due to the scarcity of water, he headed east to set up his capital at Agra. Fatehpur is the official place of prayer with a Jama Masjid and religious houses whereas Sikri was the royal residence of Akbar and his three wives and children. The palaces of his three queens portray Hindu, Islam and Christian architecture following their respective faiths.

Then, we return to Delhi for a good night's sleep at your hotel.

Wake up to a grand breakfast, board your transport and off we go to visit the major landmarks in Delhi. Our attractions include Birla Mandir, the Rashtrapati Bhavan, Parliament House, Rajpath, India Gate, and Raj Ghat.

A fairly modern temple built by famous industrialist J K Birla, Birla Mandir was built in 1933 and was inaugurated by Mahatma Gandhi. One of many temples by J K Birla around North India, this Mandir for Lord Vishnu with his consort Goddess Laxmi, is made of Kota stone and marble in the Nagara style of architecture and adorned with Fresco paintings. Along with the side sanctums for Lord Ganesha, Lord Shiva and Buddha, the grounds extend to a good 7.5 acres. Temple remains open daily from 4.30am onwards.

The Qutub Minar is the tallest single tower made of bricks, standing tall at 73 meters. The tower boasts of an eventful history and has withstood the ravages of natural and environmental disasters, standing testament to the great architecture of the Minaret. It was built in 1192 by Qutb-ud-din-Aibak but completion of the structure took more than a century and several succeeding monarchs. The five-storied structure in intricately carved with verses from the Quran. The first 3 levels are made of red sandstone while the top 2 levels are made of white marble and sandstone. Going up the tower is restricted now due to the age of the building. The Qutub Minar along with the famous Iron Pillar and Alai Darwaza in the complex will keep you wonderstruck at its glory. The monument is open to public viewing on all days from sun-up till sun-down.

This garden tomb of Humayun was commissioned by his widow consort, Haji Begum in 1569-1570, 9 years after his death. The beautiful architecture of this red sandstone building shows some Persian leanings but is mainly Islamic. Surrounded by the Char Bagh gardens, the tomb of Humayun and his other family members are on the banks of the River Yamuna.

As you walk down the regal Rajpath you come to India's largest famous war memorial – India Gate (42 meters in height), dedicated to 80,000 odd Indian and British soldiers who died in World War I. Inscribed on the haloed stone surfaces of the Darwaza are the names of 13,300 servicemen. It was inaugurated by the Viceroy Lord Irwin in 1931. Amar Jawan Jyothi, right under the Arch, is an eternal flame burning for the immortal soldiers of India. The surrounding grounds are a popular picnic place. In the evenings, above the floodlights, the India Gate glows enchantingly.

The official residence of the President of India is located majestically at the Western end of Rajpath. The massive mansion with its magnificent architecture and royal halls has seen several Presidents. The political history of the largest democracy in the world reverberates around its office complex. The palace is surrounded by the famous Mughal gardens which are open to public viewing from February to March every year for the Udyan Utsav. It is considered to be the largest residence of a Head of State in the world. Straight down on Rajpath flanking the grand road on both sides are the Secretariat Buildings and further down is the Parliament Building. The view from Rajpath with the ceremonial horses on both sides on the ramparts is spectacular.

The place of cremation of Mahatma Gandhi has been sanctified into a memorial called Raj Ghat. Here, an eternal fire burns next to the memorial. The memorial as such is a black slab facing upwards, amidst lush green lawns. Nearby is the place of rest of Jawaharlal Nehru – Shanti Vana and several other leaders and statesmen of India.

Later on, you will be dropped at the airport or railway station whence you will take your lovely experiences and memories back home with you.