Darjeeling is one of the most prominent hill stations in India. Nestled in the eastern part, the enchanting place is known for mesmerizing sunrises, jaw-dropping locales and old-world charm. The unspoiled beauty of the hills and the welcoming smiles of the local people are an added plus. Moreover, it is a perfect and unique collage of snow-covered and mighty Himalayan ranges, valleys, winding walking tracks, architectural marvels, lush green gardens, monasteries, tea plantations, momos and zoological parks. But it is the toy train that stands out amongst the rest. Plan for a perfect vacation with the Beautiful Darjeeling Tour so as to rejuvenate your senses and experience the tranquility to the core before heading back to your routine life.

The 3 Nights / 4 Days Darjeeling Tour Package gives you the best opportunity to experience peerless beauty of this place. The exclusively crafted itinerary takes you to some of the most sought-after tourist attractions in Darjeeling with utmost comfort. You will be welcomed to the land of abundant natural beauty on your first day in Darjeeling. You will also be taken to Tiger Hill early in the morning to watch the spectacular sunrise over Kanchenjunga Peak. Soak-in the ethereal charm of the alluring hill station in its most endearing form. An excursion to Mirik is bound to enchant you with matchless experiences. The panoramic views of the Darjeeling go through white clouds, deeper into green beauty, refreshing your soul and mind. 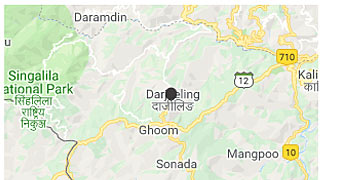 You will enjoy the scenic road journey as your vehicle zips past the picturesque landscape. Darjeeling is an enchanting city well-known for its stunning views of the Himalayas. It is situated at an elevation of about 6700 feet above the sea level. the quaint hill town is the erstwhile summer capital of West Bengal which is nestled quite nicely in the lap of Mother Nature. Towering Himalayan peaks in the backdrop add to its charm. Splendid tea gardens, delectable traditional Tibetan cuisines, meandering toy train rides and picturesque beauty lures honeymooners to this place. For this reason, Darjeeling Tour Package for Couple usually sells like a hotcake. This city is also called as the "Queen of the Hills".

After reaching Darjeeling, complete check-in formalities at the hotel and unwind yourself. The rest of the day is at leisure. In the evening, you can take a walk on Mall Road featuring meandering road bordered by mystic trees. Savor the views of the mountain ranges.

Later, enjoy an overnight stay at the hotel.

Early in the morning, drive towards Tiger Hill which is located at the height of 2590 meter above sea level. This place is famous for offering splendid views of the sunrise. From here you will view the breathtaking scenery of the peaks of Kanchenjunga being illuminated by the rays of the rising sun. The magnificent view of snow-capped mountains and cotton clouds attract tourists to Tiger Hill from all over the country. After that, come back to Darjeeling.

En-route you will visit Ghoom Monastery which lies at a grand elevation of 8000 feet. It is one of the famous Tibetan Buddhist Monasteries. It was established by Lama Sherab Gyatso in 1850 and is a part of the Yellow Hat Sect which is known as Gelupka who worship the "Coming Buddha". You will be amused to see a 15-feet high statue of Maitreya Buddha and rare Buddhist manuscripts within the premises. You can also witness the beautiful view of the majestic Kanchenjunga from outside of this monastery.

Then you will be moving to the War Memorial which stands as a reminiscence of the Gurkha martyrs who sacrificed their lives in the wars for their country since independence. This place was constructed to honor 76 brave sons of Darjeeling. You can also see War Memorial while riding on the famous Darjeeling Toy Train. Now, go to the Batasia Loop which is one of the most picturesque train routes. It is a lush green toy train pathway which is meant to minimize the elevation of the Darjeeling Himalayan Railway and it overlooks the snow-laden peaks of Kanchenjungha. The design of this point is mesmerizing and allows the track to wrap around itself via a hilltop tunnel.

As you reach a hotel, enjoy a hearty breakfast. Then, get ready for Darjeeling sightseeing that starts amidst cool mountain breeze and the stunning landscapes. At first, you will be visiting Peace Pagoda which is the symbol of spirituality and peace. It reflects four avatars of Lord Buddha and attracts people belonging all religion. Before moving further, take a ride on the cable car which is renowned across the world. Through this ride, you will witness a myriad of exquisite landscapes ranging from the glorious snow-capped mountains to the charming valley replete with verdant tea estates. This place gives an array of divine panoramic views to the visitors. Next highlight of the trip is taking a stroll amidst verdant tea estates. You can take the pictures and purchase the world-best tea for yourself.

Also, you can set your foot into Padmaja Naidu Zoological Park, a splendid place in Darjeeling and a haven for animal lovers. Spot a wide variety of animals such as barking deer, blue & yellow Macaw, Asiatic black bear, Himalayan Monal, Eastern Pangolin, Leopard Cat, Red Jungle Fowl, Himalayan Wolf, yak, and many more. It is also known as Darjeeling Zoo.

Thereafter, you can head to explore Himalayan Mountaineering Institute which is recognized as one of the best mountaineering institutes in the world. The main aim of this institute was to encourage, enhance and support the interests of the people in mountaineering. It also wanted to the channel the abundant energy of the youth into a productive and self-awarding sport. Aspiring mountaineers from all over the world come to this institute to develop their skills.

Also, move to Tensing and Gumpo Rock. Tenzing Rock is a gigantic natural rock and named after Tenzing Norgay who created history by climbing the Everest first time with Edmund Hillary in 1953. On the other hand, the Gombu Rock is named after Nawang Gombu who is the nephew of Tenzing and was the first person to climb the Everest twice in 1963 and 1965. Both of these rocks are used for rock climbing training purpose by Himalayan Mountaineering Institute. Afterward, head towards Tibetan Refugee Self Help Center which was set by the Tibetan refugees in 1959 after they followed Dalai Lama and escaped from Tibet. The people of this place adopted the principle of self-help so that they can become self-independent. Handicraft items are the earning source for the natives of this place. The main objective of this self-center is self-rehabilitation and to help the underprivileged Tibetan community.

Last but not least, visit Natural History Museum which exhibits more than 4000 specimens including Toddy cat, Himalayan Brown Wood Owl, Estuarine crocodile, leopards, etc. It also shows the varieties of butterflies and birds of the hills. You can find preserved remains of reptiles, bird species, fishes, insects, and mammals that are displayed in a replication of their natural habitats. Later, you can stroll at Mall Road for shopping to collect some souvenirs to be taken back home.

After this amazing day and retire into your room for a good night's sleep.

After having a brisk breakfast on the 3rd day of your Darjeeling Holiday Package, get ready for a full day excursion to Mirik. Delight in some rejuvenating time with your loved ones at this fascinating place. The climate of Mirik remains mild and soothing. It is a tranquil laid back hill station that offers scenic views of vantage points. Tourists can witness lovely sights of Kanchenjunga from here. This area is covered by many rolling tea estates on mountain slopes, cardamom plantations and orange orchards.

Also, Mirik is popular for its man-made Sumendu Lake. This lake is calm, wonderful and yet refreshing. You can take a boat ride on the lake. A pony ride on the lakeside also gives the exhilarating experiences to the visitors. The climate around this lake remains pleasant and its panoramic views keep you mesmerized.

When you go back to Darjeeling from Mirik, midway you will be visiting Pashupati Market. This market is full of jackets, imported electronic gadgets, accessories, perfumes, clothes, cosmetics and much more.

In the evening, you can go to Mall Road or local market of Darjeeling to spend your leisure time.

After that, the beautiful day ends with a restful overnight stay at your pre-booked hotel.

After you have a wholesome breakfast at the hotel, our tour agent will drop you at Siliguri / New Jalpaiguri Railway Station / Tenzing Norgay Bus Stand / Bagdogra Airport. Post reaching there, you will proceed for your onward destination. Hence, Darjeeling Tour Plan comes to an end amidst the green-grey hills, scenic vistas and awe-inspiring views that guarantee a vacation to be cherished forever.