Located in Eastern India along the Bay of Bengal, Orissa is a land of scenic views, historic sites, religious places, wildlife, thrilling experiences, tribal culture, and much more. Our Best of Orissa tour covers truly the best of the state within 6 nights and 7 days.

With our well-planned itinerary, get ready for pilgrimage to the holy Jagannath Temple in Puri, highly revered Lingraj Temple in Bhubaneswar and many others. Take a trip back to the olden days marveling at the spectacular architecture of the mesmeric Sun Temple, Khandagiri and Udayagiri Caves. Relax around the scenic beaches in Orissa and one of the most charming stops of the holiday, the Chilika Lake. Spend a remarkable holiday and bring home memories worth treasuring for the rest of your life. Peruse the detailed itinerary for complete information about your Bhubaneshwar Puri Konark tour package. 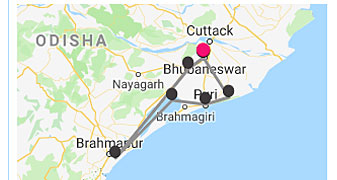 Arrive at Bhubaneswar Airport, where you will be cordially welcomed by our representative. You will get an assisted transfer to your hotel. Check-in at the hotel, freshen up and leave for sightseeing in the afternoon. The first stop of the day is the Khandagiri and Udayagiri Caves, one of the earliest groups of Jain rock-cut shelters. Here you will be in awe of the amazing skills of human endeavor. Explore the caves and see the fine carving skills. Udayagiri is a group of 18 caves while Khandagiri is a group of 15 rock-cut caves. The inscription engraved in the caves is in Brahmi and Devanagari script. Next, visit the Kedar Gauri Temple or popularly known as Kedareshwar Temple, dedicated to Lord Shiva.

And then you will visit the Lingraj Temple. It is the most prominent landmark of Bhubaneshwar and it is dedicated to Lord Shiva. This is the largest temple in the city and it is an epitome of the Kalinga architecture. It is built of sandstone and laterite. It is one of the finest examples of purely Hindu temple in India.

Start the day with a hearty breakfast at the hotel. Post-meal, proceed towards Konark. Pay homage at the stunning Sun Temple, one of the UNESCO World Heritage Sites in India. The architecture of the temple is truly an exceptional beauty. Said to be built in the 13th-century, the temple is designed in the form of a chariot, dedicated to Sun God. After marveling at the beautiful architecture, spend some relaxing moments at the Chandrabhaga Beach. One can enjoy sunbathing, surfing and swimming there. Later on, proceed to Puri.

On your arrival, check-in at the hotel. Thereafter, get ready for a visit to the Jagannath Temple, one of the holy Char Dhams in India. There are three idols in the temple which represents the Lord Jagannath, his elder brother Balabhadra and their sister Subhadra. The idols of these three deities are made of wood and ceremoniously replaced after every 13 or 19 years with the same replica. The Jagannath Temple is surrounded by 30 different small shrines. Narasimha Temple which is adjacent to the main shrine is believed to be constructed much before this sanctum sanctorum.

Next, pay a visit to Gundicha Temple. This is also known as 'Garden House of Jagannath'. It remains vacant most of the year. It is an important place during the annual Rath Yatra of Puri as the temple is occupied by the idols of the three deities during the seven days of the grand fiesta. Spend a relaxing evening at Puri Beach. Watch the waves, grab some seafood snacks and enjoy a beautiful sunset.

Later on, return to the hotel for an overnight stay.

Wake up refreshed as you will proceed for a temple tour in Puri. Bask in the feelings of devotion as you visit the holy temples in the town. Pay a visit to Sri Sonar Gauranga Temple which is dedicated to Lord Gauranga and Lokanatha Temple which is dedicated to Lord Shiva. It is believed that Lord Shiva is the guardian deity of the treasures and jewelry of the Lord Jagannath Temple. Astasambhu Temple, Dakshinkali Temple and Siddha Mahavir Temple are the few other famous temples which you will visit.

Astasambhu Temple is also dedicated to Lord Shiva. It houses a group of 8 Shivalingas which are made from precious stones and each one of them is of a different color. Shivalinga changes its color due to the reflection of the sun. Dakshinkali Temple is dedicated to Goddess Kali. It is believed that Goddess Kali is the guardian of the kitchen of the Lord Jagannath Temple. Siddha Mahavir Temple is dedicated to Lord Hanuman. The idol of the deity is famous as it is an image of five-faced Hanuman. This temple is a perfect example of fine art.

Visiting each of these temples takes you closer to the divine. The amazing spiritual ambiance is soul-elevating and memorable. After a well-spent day, the evening is at your leisure. You can explore the local markets of Puri and enjoy the shopping. Return to the hotel in the evening and have a sumptuous dinner.

Overnight stay at the hotel in Puri.

Start the day with breakfast at the hotel. After which, begin your drive to the picturesque Chilika Lake. Known as one of India's as well as Asia's largest lakes, it is one of the largest grounds for migratory birds in winter. It is also the largest coastal lagoon in India and the second largest in the world. Soak-in the beautiful views of the surrounding area as well as try your hand in identifying different bird species that inhabit the lake. It is home to Irrawaddy Dolphin and is one of the two lagoons in the world which are home to this endangered species.

After a wonderful time at Chilika, travel to Gopalpur. You will have an assisted check-in at the hotel in Gopalpur. Spend a peaceful, relaxing evening at the alluring Gopalpur Beach. The day is at your leisure. You can stroll around the beach and spend some quality time with your loved ones. Come back to the hotel after an exciting day and have a delicious dinner.

Overnight stay at the hotel in the Gopalpur.

After a delicious breakfast in the hotel, proceed for the sightseeing tour of Gopalpur. Firstly, you will visit the exciting Rushikulya Beach. This is the hidden gem of the Gopalpur. It is a secluded place which is visited by very few people making it a perfect getaway. It is a peaceful and serene place to spend some quality time. It is home to Olive Ridley Turtle and you can watch these charming creatures of the water who only visit the land to breed, lay eggs. To witness the turtles coming out of the egg is a lifetime experience which one should not miss. The eggs generally hatch early in the morning.

Next, pay a visit to Maa Taratarini Temple. It is perched on the Kumari Hill on the bank of the Rushikulya River. It is one of the four major Tantra Peethas and the most revered Shakti Peethas. There are no plans for the evening. You can enjoy either at the beach or the soak in the comforts of your room in the hotel. You can explore the local market and buy some souvenirs for your loved ones. Savor a delicious dinner.

Overnight stay at the hotel in the Gopalpur.

Start day 6 of the best of Orissa tour with a hearty breakfast. After which pack your bags and check out from your hotel. Continue driving towards Bhubaneswar, after a quick stop at Atri. It is a small village in Khurda which is known for its perennial hot spring, which has a temperature around 55 degrees Celsius. Believed to have medicinal properties as well as pious that fulfill people's wishes, the hot spring is the main lure for people visiting here.

On arrival in Bhubaneswar, check-in at your hotel. In the afternoon, pay a visit to Nandankanan Zoo. Home to the majestic white tigers, the park offers a treat that you must not miss. You can enjoy boating on Kanjia Lake where you also enjoy the rich flora and faunal diversity. Zoo Museum is another place where one can visit. Later on, enjoy an exciting jungle safari in the day and you can spot white tiger, lion, bear, reptiles, and amphibians. Return to the hotel in the evening after an adventurous day. Have a sumptuous dinner in the resort.

Overnight stay at the hotel in Bhubaneswar.

Today is the last day of your Bhubaneshwar Puri Konark Tour. After you are done with your breakfast, pack your bags and check out from the hotel. You will have an assisted transfer to Bhubaneswar airport/railway station to continue proceeding towards home.