From sightseeing of Mumbai, the ‘City of Dreams’ to exploring Ajanta Ellora Caves, a UNESCO World Heritage Site, this tour includes them all. Besides, the 4 Nights / 5 Days Ajanta Ellora Tour package has a lot to offer. Through this tour, you not only get an opportunity to witness the caves at their best but also to explore Mumbai.

In addition to pacifying your quest for historical facts about Ajanta Ellora Caves, the tour also takes care of the spiritual aspect. And thus, it takes you to a number of popular pilgrimage sites in Maharashtra. A guided tour of Nashik is an added plus.

So, what are you waiting for? Book this package that outstands amongst the rest of the Ajanta Ellora tour packages by Indian Visit and get ready for a bag full of surprises. Additionally, you can browse through our array of Maharashtra tour packages that also offer you the most captivating experience at this amazing state in India. 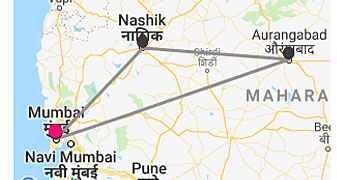 Upon arrival at the Mumbai Airport/Railway Station, our representative will meet and assist you to get transferred to your pre-booked hotel. Post-check-in at the hotel, get freshen up and then set out to explore Mumbai, famed as the 'City of Dreams'. Firstly, you will visit the Gateway of India. Located on the southern part of the city, the Gateway offers a beautiful view of the Arabian Sea. In addition to the view, this magnificent structure was constructed in yellow basalt stone. Furthermore, its Indo-Saracenic style architecture, intricate latticework and 26 meters high archway which is joined with four turrets make this attraction a popular among history buffs, tourists and photographers. Later, board a ferry to visit the Elephant Caves which is situated very close to the Gateway of India. Then, you will continue your tour by taking the blessings of Lord Ganesha at one of Mumbai's holiest places, Shree Siddhivinayak Temple.

Post lunch break, visit the Prince of Wales Museum. The museum which is also known as 'Chhatrapati Shivaji Maharaj Vastu Sangrahalaya' is considered as one of the most prominent museums in India. This museum which displays a myriad of collection of ancient artifacts, artworks and sculptures of the country, offers remarkable glimpses of India's glory and rich past. Besides, currently, the museum has several new galleries which exhibit the artworks of Hindu God Krishna along with textiles and Indian traditional costumes.

In the evening, visit Juhu Beach. The beach is famous for its long stretch and a variety of street foods. It is the best place to spot Bollywood and TV celebrities. When here, don't forget to visit the exemplary ISKCON Temple which is meters away from the beach. Or else you can watch a theatre performance at the famous Prithvi Cafe.

Later, come back to the hotel for dinner and overnight stay.

Today, after an energizing breakfast, you will be transferred to the airport to catch the flight for Aurangabad. You can also catch a morning train for Aurangabad. Nestled on the banks of the Kham River, Aurangabad is one of the royal cities of the state of Maharashtra.

On reaching Aurangabad, check-in at the hotel and relax for a short period of time. Then you will leave to explore another architectural wonder of the ancient period, the Ellora Caves. Located around 29 km from the city center, Ellora Caves is a group of around 34 Hindu, Jain and Buddhist caves. These caves which were constructed in the period between 6th and 11th-century AD are the perfect example of the prehistoric time. When you explore this archaeological wonder, visit the Vishwakarma - cave number 10, Dashavatara - cave number 15, Kailasanatha Temple - cave number 16, Rameshwara - cave number 21 and Indra Sabha - cave number 32.

Later, visit one of the most impressive and undefeatable forts in the entire country, Daulatabad Fort. Around 15 km away from the major city of Aurangabad, Daulatabad Fort stands strong on a 200 meters high conical hill. The hill provides this Fort a strategic position, architectural beauty and protection from the enemies. Another unique aspect of the mighty Daulatabad or Devgiri Fort is its architectural brilliance. Its three layers of defensive walls, moat, scrap, the solid rocks of subterranean passage and a large pit of fire in its upper outlet give hard times to the enemies. Last but not least, marvel at a mesmerizing view of the entire city by climbing some 750 odd steps up to the top.

Later, in the evening you can visit the local markets and pick up your favorite items. Overnight stay at the Aurangabad hotel.

On the third day of your Ajanta Ellora Tour, after having breakfast at the hotel, you will visit the prime attraction in the city, the Ajanta Caves. Situated around 99 km north of Aurangabad, Ajanta Caves is a group of around 30 Buddhist caves that are carved out of rocks. These caves which were constructed in the period between 2nd-century BC and 6th-century AD are considered as the most brilliant examples of ancient Indian art and architecture. Besides, it’s believed that the ancient Buddhist monks used these caves for studying, living, and worship purposes. The murals, paintings, and carvings on the walls reveal many unknown facts about the way of living, the cultures and traditions of the ancient period. These caves are designated as the UNESCO World Heritage Site.

After exploring Ajanta Caves, you will return to the hotel for dinner. Overnight stay at the hotel in Aurangabad.

Today, you will be driving towards the most popular holy city in Maharashtra, Nashik that hosts one of the largest religious gatherings in the world known as Kumbh Mela. Upon reaching, check-in at the hotel. After resting for a while, you can begin your short sightseeing tour of Nashik. Firstly, you will visit Trimbakeshwar Jyotirlinga Temple. Trimbakeshwar which is an abode of one of the twelve Jyotirlingas of Lord Shiva holds great religious significance in Hindu religion. The enticing feature of the Trimbakeshwar Jyotirlinga Temple is that the shivalinga has three faces representing Lord Brahma, Lord Vishnu and Lord Shiva.

Post this, visit the Pandavleni Caves. Situated on the Trivashmi Hills, the Pandavleni Caves are ancient rock-cut caves. They were constructed by the Buddhist kings in the periods between the 4th-century BC and 12th-century CE. It is a group of 24 caves representing Hinayana Buddhism. Of all the twenty-four caves, cave numbers 3, 10 and 15 are the most beautiful ones. The architecture of these caves is unique and impressive. The caves consist of inscriptions which act as important study material for researchers and scholars.

Come evening, spend a pleasant time by interacting with the locals to know more about their lives and cultures and enjoy tasty dinner at a local delicacy joint. Overnight stay at the hotel in Nashik.

Waking up in the morning, stuff yourself with a delicious breakfast and enjoy a drive from Nashik to Mumbai. On reaching Mumbai, you will be transferred to the railway station/airport to catch the train/ flight for your final destination. Hope you take back many happy memories of your holidays.