Agra has one of the Seven Wonders of the World - Taj Mahal, on its land. The day Taj Mahal was built, Agra was destined to be one of the most famous destinations. Travelers from around the world head to Agra to view this epitome of love.

Filters
X
Filter by
See Results
Filters
Showing : 1-20 out of 40 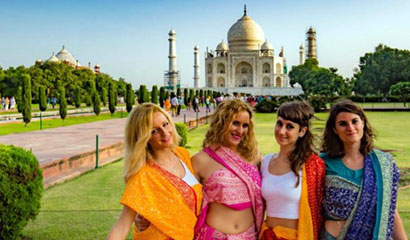 Experience the cultural blend of traditional as well as modern lifestyle with Golden Triangle With Dunes. The 6-day tour starts from Delhi, covering Jaipur, Agra, Fatehpur Sikri and the dunes of Dhula Raoji.

Explore breathtaking beautiful Taj Mahal. Fall in love with Jaipur. Soak in the old world charm of Delhi. There is surely nothing better than the Delhi Agra Jaipur Tour to get a perfect introduction of India in a short span.

Get a glimpse of glorious history and royal culture at Delhi, Agra, Fatehpur Sikri and Jaipur. Indulge in exhilarating experiences with 6-day Golden Triangle India Tour. Whether you’re a first-timer or visit India often, you’ll find this tour interesting.

Exclusively crafted 7 Days Golden Triangle Tour gives you a chance to witness the culture, beauty and heritage of the three iconic cities of India. The well-planned route covers Delhi, Jaipur, Agra and the top attractions in the cities.

Witness the grandeur of India with this weeklong Golden Triangle Tour with Varanasi. Be it basking in the bliss at Varanasi, one of the oldest and holiest cities in India or exploring historic sites, the tour covers it all.

Explore the rich culture, heritage, traditions and attractions of India with just a single tour. Designed in a distinctive way this tour includes almost everything and will surely change the way you think about the incredible country.

Vibrant, enchanting, dazzling or vivid, even words fall short to describe Rajasthan. Bestowed with a plethora of attractions, the ‘Land of the Kings’ exudes sheer opulence in every bit. Travel to this royal state with us like never before.

Indulge in an overwhelming experience of traveling to the birthplace of Lord Krishna, where he spent his childhood and Agra as well. Explore Mathura and Vrindavan to live in the era when the Lord took birth as a human.

Experience a time travel as you head to explore the two iconic cities of India, Delhi and Agra. Admire the scenic beauty of the Taj Mahal or cherish a perfect mélange of old and new in Delhi with this well-planned tour.

Rajasthan, a royal state in the country boasts of ruins of Indus Valley Civilization, the famous forts, palaces and other attractions. It is home to World Heritage Sites and you can explore them all with this Royal Rajasthan Tour. 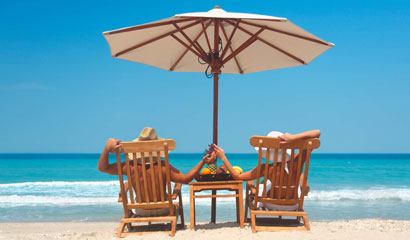 Golden Triangle with Beach and Backwaters is a tour that allows you to experience the royalty of the north and the serenity of south India. Also, visit fort and palaces of Rajasthan and explore the beaches & backwaters of Kerala.

The Classic Rajasthan tour is a wonderful package that will introduce you to the magnificent palaces and Havelis in Rajasthan and historical sites in Delhi and Agra. You will experience the amazing Rajasthani culture and its history with this tour.

Golden Triangle tour with Udaipur is designed for those who want to explore the classic forts and palaces. Visit the famous attractions in Delhi, Agra, Jaipur, and Udaipur while covering the in the Golden Triangle circuit. 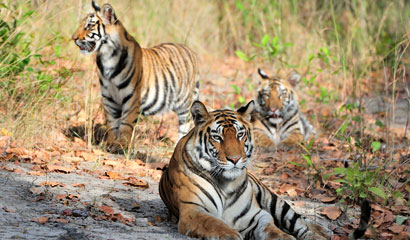 The meticulously-designed Golden Triangle with Ranthambore tour takes you to the three most popular cities in India namely Delhi, Jaipur and Agra. Bedsides, the itinerary also allows you to listen to the call of the wild at Ranthambore.

Delhi is famous for its rich history and vibrant culture. Rajasthan is a home to a plethora of attractions while Agra owns the Taj Mahal. Delhi Agra Rajasthan tour package allows you to explore these places in one go.

The 18 days and 17 nights Buddhist Pilgrimage Tour includes the famous sites related to Lord Buddha along with the heritage sites in Delhi, Agra, Jaipur and Varanasi. The tour allows you to explore Lumbini, Bodh Gaya, Rajgir, Kushinagar, Shravasti and Dharamshala.

Golden Triangle with Rajasthan and Goa

India has a rich heritage and culture which makes it an extraordinary destination. Golden Triangle Tour with Rajasthan and Goa is an elaborated circuit which will give you a deep insight into the royal and splendid culture of India.

We offer a number of Agra tour packages that cater to the travelers a hassle-free journey to Agra. Once you reach Agra, you will find many other attractions other than the Taj, which are equally attractive.

The rich history of Agra is contributed by several dynasties other than the Mughals. The city was founded by Sikandar Lodi from the Lodi dynasty. We find the reference of Agra in Mahabharata, as Agra van and Arya Griha (the abode of the Aryans) but the modern name Agra was referred by the ancient Greek scholar Ptolemy. With our well designed Agra trip package, you will get an insight into the history of Agra while visiting the famous heritage sites.

Once the Mughal capital, Agra is dotted with many beautiful palaces and monuments. But what makes the place exceptional among others is the Taj Mahal. It is considered as the most beautiful building in the world. The beauty of the Taj is described by many great poets. While Rabindranath Tagore said “it is a teardrop on the cheek of eternity”; Rudyard Kipling described Taj Mahal as “the embodiment of all things pure” and its creator, Emperor Shah Jahan said, “it made the sun and the moon shed tears from their eyes”.

Every year tourists that count more than the population of Agra visit this beautiful monument. It is a UNESCO World Heritage Site situated on the bank of River Yamuna. This white marble monument took 20 years to be built by 20,000 workers.

Besides Taj Mahal, a must-visit site during your Agra tour is the Agra Fort. This fort is made up of red stone and marble. It used to be the Mughal abode before they shifted to the National capital. Built by Emperor Akbar in 1565, this is one of the most beautiful forts in India. The vast courtyard includes a number of gardens, palaces, and mosques like Anguri Bagh, Shish Mahal, Mina Masjid, and Diwan-i-Khas. Agra Fort or Red Fort is another UNESCO World Heritage Site.

Maybe the main attraction for you in Agra is the Taj Mahal but don’t forget to visit the Baby Taj or the Tomb of Itimad-ud-Daulah. This monument was built by Nur Jahan in the honor of her father Mirza Ghiyas Beg and is nicknamed as ‘Baby Taj’ for its resemblance with the Taj Mahal. This construction is entirely made from marble and the intricate design worth visit during your Agra sightseeing tour.

You are in Agra, and if you do not visit the Akbar’s Mausoleum, you will miss something amazing. This monument was designed by Akbar himself during his lifetime and it commemorates the greatest of all Mughal emperors. Built of white, yellow and blue-marble, the monument has beautiful geometric and floral designs that stun the visitors.

Apart from the forts and monuments, the Elephant Conservation Centre deserves to be included in your Agra tour itinerary. This is a rehabilitation center for the wounded elephants who are rescued from the forests and offered medical care. Volunteers are welcome to offer services including the preparation of food for the elephants.