The biggest, and the most significant city in the district, Guwahati is a door towards the Northeast where all the buzz happens. It is here where one can discover the best hotels, international air terminal, business centre points, local flavors and a lot of temples to visit. Interesting, isn’t it? When on a vacation in Guwahati try to visit Kamakhya Mandir, Bhubaneshwar Temple, ISKCON Temple, and Vashistha Ashram. There are a lot of other places to investigate in Guwahati and this Guwahati travel guide can be of your great help.

The clamoring city of Guwahati is a portal to the wonderful district of Northeast India. Situated in Assam, it is the biggest city in the area and one of the quickest developing urban communities in India. The region of Dispur fills in as the state capital. It is honored with a huge history and has various antiquated temples, which prompted it to be called as 'City of Temples'. The venerated Kamakhya Temple draws in fans from the nation over. Umananda Temple is situated on Peacock Island, which stands apart as the world's littlest occupied riverine island.

The city, Guwahati isn't just perceived among the notable travel destinations in North East India however it is additionally viewed as the traveler's base point from where one can reach and investigate different pieces of Assam and the neighboring states like Meghalaya. The other top activities from this city are to venture out to the Kaziranga National Park and appreciate natural life like wild animals and safaris.

The travel industry right now is inadequate without visiting the Guwahati zoo. The zoo has a colossal assortment of natural life animals and is an exceptional fascination for kids. Pretty much a separation of two kilometers from the city is the ISCKON Temple which is a quiet and peaceful spot and the structure of the sanctuary is additionally tranquil alluring. One can tune in to Bhajan and witness the aarti here and invest some energy in isolation; feeling the glow of the spot. Another fascination of the city is the Navagraha Mandir which is known as the temple of nine planets.

The best time to visit Guwahati is from November to March when the weather in the city remains comfortable for the sightseeing tour. During this time the daytime remains balmy while the night remains chilly.


How To Reach Guwahati

Guwahati is well-connected with the rest of the country with all the modes of transport. Here we have given a brief about how to reach Guwahati. Take a look and get more information before planning the Guwahati trip.

Other Places to Visit in Assam 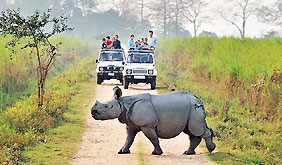